Enviros to court: Trump ‘cut every corner’ on NEPA overhaul 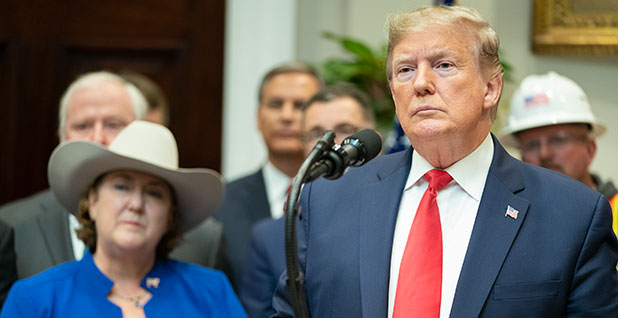 Coalitions of groups from across the country filed two lawsuits today challenging the White House Council on Environmental Quality’s newly finalized implementing regulations for NEPA, which govern analysis of projects ranging from highways and bridges to oil and gas leases.

"Here, where the government has completely rewritten the regulations implementing one of our nation’s most significant environmental laws — a law that has been in place for over fifty years with regulations that have remained unchanged for decades — the government’s responsibility to follow procedure is at its highest," wrote the groups involved in the SELC lawsuit.

"In the past, it was pretty clear you had to consider these things," she said. "It’s going to create a lot of confusion."

"The current administration’s attempt to topple 50 years of fundamental environmental law is an illegal and transparent gift to industry; another assault on the environment to meet and defeat," Jack West, policy director at the Alabama Rivers Alliance, said in a statement. "We are proud to be joining in this important legal challenge to stop these reckless rollbacks."

This afternoon, a separate coalition of 20 environmental justice, outdoor recreation and conservation groups — led by the Western Environmental Law Center (WELC) and Earthjustice — filed their own lawsuit over CEQ’s regulations in the U.S. District Court for the District of Northern California.

The groups argued that the changes in CEQ’s regulations go against "Congress’s manifest intent" in enacting the federal environmental law in the 1970s.

"We have consistently defeated this administration’s relentless, vicious dismantling of safeguards for people and the environment, and we will do so again for this critically important law," Susan Jane Brown, WELC co-counsel on the case, said in a statement.