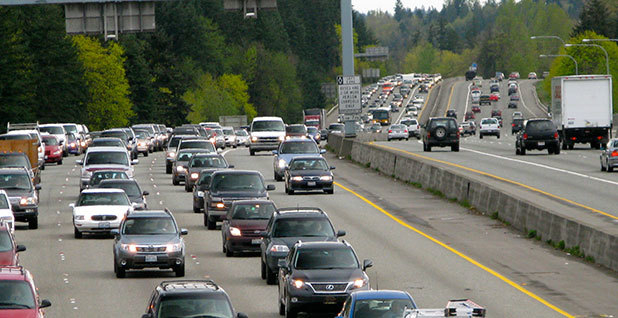 The EPA advanced its review of fuel economy standards today, setting the stage for them to be finialized before Donald Trump's inauguration. Photo courtesy of Flickr.

U.S. EPA is moving ahead of schedule with its review of fuel economy standards, setting the stage for the Obama administration to make a final decision against adjusting the standards before President-elect Donald Trump is inaugurated.

EPA released a proposed determination today arguing that automakers are well-positioned to meet greenhouse gas emissions and fuel economy standards for model years 2022 to 2025 under the corporate average fuel economy (CAFE) program, and that the standards do not need to be readjusted.

The announcement comes earlier than federal regulators had previously indicated. According to a schedule from the National Highway Traffic Safety Administration, which also regulates fuel economy, the proposed determination was originally slated to come out in mid-2017, with a final determination expected by April 2018.

Today’s proposal now enters a 30-day comment period, which could allow the Obama EPA to finalize its decision just under the wire before the Trump administration takes over Jan. 20.

Since the election, environmental and consumer advocates have feared that the Trump administration would try to roll back CAFE standards, particularly if the midterm review were still ongoing by the time he took office.

Today’s announcement will assuage some of those fears, though a Trump EPA could independently move to roll back the standards in a new rulemaking of its own.

EPA Office of Air and Radiation acting chief Janet McCabe dodged questions today about whether the agency is trying to finalize the standards, saying what Trump might do is "not on our mind."

"What is on our mind is [Administrator Gina McCarthy’s] view of the information that is available, and, in her view, it is appropriate now to indicate that the standards are on track and that the industry is on track to meet them," McCabe said. "I am not speaking to anything that a future administration might or might not do."

The proposed determination follows a draft technical assessment released over the summer showing that automakers could reach an average fuel economy ranging between 50 and 52.6 mpg across their light-duty fleets by 2025 (ClimateWire, July 19).

McCabe said that assessment, and not politics, was the basis of EPA’s decision to move forward with its proposal.

"This has been years’ worth of work to get us to this point, and the administration’s view was that the record is sufficient and compelling to indicate in this proposal that there isn’t a reason at this point to consider changing the standards," she said.

Automakers have argued that maintaining current CAFE standards through 2025 will present an undue financial burden on them, which would then be passed down to consumers. Both the technical assessment and the proposed determination dispute that, finding that consumers would earn back the cost of their car in fuel savings over time.

Recently, automakers have turned their attention to the incoming Trump administration.

Earlier this month, the Alliance of Automobile Manufacturers wrote a letter to the Trump transition team asking him to "harmonize and adjust" the standards to ensure they are not too burdensome on the industry.

Today, the alliance slammed EPA for its "rush" toward a preliminary determination in a statement.

"This extraordinary and premature rush to judgement circumvents the serious analysis necessary to make sure the CAFE (and greenhouse gas) standards appropriately balance fuel efficiency, carbon reduction, affordability and employment," it said.

Environmentalists applauded the early release of the proposal today.

"These common-sense standards are doing exactly what they were designed to do. They’re protecting our health and climate from dangerous pollution, saving billions of gallons of fuel, and saving car owners an average of nearly $4,000 over the life of the vehicle," said Luke Tonachel, director of the Natural Resources Defense Council’s Clean Vehicles and Fuels Project. "There’s no evidence we should slow down. Loosening standards would only cost consumers more, increase our dependence on oil and put Americans at greater risk from a changing climate."

"The Environmental Protection Agency’s draft technical review of the current fuel economy standards shows that these goals are reachable and working — due to technological innovation, our cars are cleaner and more efficient than ever before," he said. "We look forward to strengthening these standards further in the future and cleaning up our dirty transportation sector."