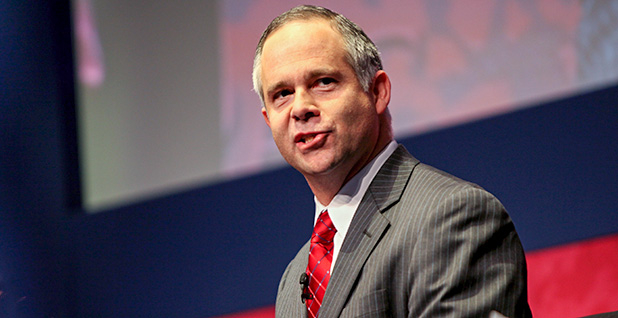 The Heartland Institute has found an ally in U.S. EPA Administrator Scott Pruitt as he seeks to portray climate science as a debate.

While a number of conservative think tanks employ scientists or economists to discredit mainstream climate science, the Illinois-based Heartland Institute has a stable of them. It’s devoted years to crafting an alternative body of climate change research that exists outside the prevailing view of scientists. Now, President Trump’s administration may give the libertarian group its greatest influence in years.

In the field of climate science, researchers determined decades ago that humans are warming the planet at an unprecedented rate through the burning of fossil fuels. But Pruitt has questioned those foundational findings, claiming instead that humanity’s influence is uncertain and should be debated publicly.

So EPA has reached out to Heartland for a list of its researchers, Heartland spokesman Jim Lakely said. Administration officials are seeking experts who have a "non-alarmist" approach to climate science, he said. Over the years, Heartland has received millions of dollars in funding from energy companies as well as major Trump donors to cultivate a sense of doubt about mainstream climate science.

On Tuesday, Pruitt said he is preparing a red-team review of climate science that could take months and span across multiple agencies. He told "Fox & Friends" that it’s debatable whether climate change poses an existential threat to humanity. Highlighting uncertainties in climate research could support the administration’s efforts to roll back Obama-era environmental regulations, which have roots in scientific literature.

"The red-team scientists are the ones you see across the spectrum who don’t take for granted that the climate is on this unsustainable path of existential threat and that humans are 99 percent responsible for that," Pruitt said. "We need to have a meaningful debate on what we are facing as a country and internationally."

Some think tanks in Washington portray climate science as a debatable topic, and some have scientists on staff. Heartland is a smaller, scrappier cousin that favors a more aggressive form of climate contrarianism.

This year, Heartland sent thousands of science teachers across the country a curriculum in alternative climate science that highlights uncertainties, an effort the group has pursued since at least 2012 (Climatewire, March 15, 2012). It also held a conference near the White House this spring where some speakers accused federal researchers of fraud. In 2015, it sent a delegation to the Vatican in an attempt to sway Pope Francis from his concerns about climate change.

In 2012, it published a book comparing societal belief in climate change to a prophecy that instructed a tribe to massacre its livestock; more than 35,000 people died of starvation and some survivors were enslaved (Climatewire, April 2, 2012). Heartland also publishes a comprehensive volume of research, the Nongovernmental International Panel on Climate Change, which seeks to rebut the United Nations’ Intergovernmental Panel on Climate Change. The IPCC is widely considered the leading authority on climate science.

Heartland lost about $1 million in donations in 2012 after it posted a billboard comparing those who believe in global warming to Unabomber Ted Kaczynski, according to the group Climate Truth, which ran a campaign against Heartland encouraging sponsors to drop the organization. An entire division of Heartland, conducting research on the insurance industry, walked away amid the fallout (Climatewire, May 7, 2012).

Eli Lehrer, who headed the insurance group for Heartland, said he left because the billboard was a step too far. He founded the R Street Institute and is still on good terms with some of his former colleagues. Still, he questions whether Heartland is a major player in Washington policy, even if some of its more aggressive tactics play well with the Trump administration.

"Whatever influence Heartland has, it is not some enormous boogeyman," Lehrer said. "Its budget is absolutely dwarfed by any sizable environmental organization you can name."

Heartland took in $4.6 million in contributions in 2015, according to its most recent public financial documents. By contrast, the Sierra Club took in $94 million in that same year.

Heartland may lack the sort of funding that normally yields policy influence, but it is gearing up for a period under Trump when attacking the science stands to heighten its exposure. It recently selected former Rep. Tim Huelskamp (R-Kan.) as its new president, a move that allows Joe Bast, its former president, to act as the group’s CEO. Bast, who describes himself as a former hippie from Wisconsin, has acknowledged a strategy to reject basic climate science, a move that leaves carbon policies breathless (Climatewire, Feb. 23, 2012).

Huelskamp, the former chairman of the Tea Party Caucus, could provide political sway to the group at a time when it has a receptive audience in the White House and in Congress.

Heartland has lost major sponsors over the years in part because of its approach to climate change. Both State Farm and General Motors Co. once funded Heartland, but they publicly dropped their funding because of the group’s unorthodox techniques.

Nonetheless, Heartland has a generous benefactor with an enthusiasm for fringe science. Robert Mercer, the conservative hedge fund manager, has donated more than $5 million to the group in recent years, according to public tax filings. He was also a major booster of the Trump campaign, with close ties to former White House adviser Steve Bannon. Mercer also funds the Breitbart New Network, which routinely features climate contrarians. At Heartland’s annual climate change conference earlier this year, Mercer and his daughter Rebekah circulated in the crowd. They sat near Bast as Pat Michaels, director of the Center for the Study of Science at the Cato Institute, told the audience that greenhouse gases don’t harm human health.

It’s disturbing that a government agency is reaching out to a group "without any credibility" for advice, said Andrew Rosenberg, director of the Center for Science and Democracy at the Union of Concerned Scientists. He said Heartland consistently acts at the behest of its funders rather than practicing sound science. Its newfound potential to influence policy under Trump may not have been possible under a traditional Republican administration, he said.

"In some ways because they have trafficked in conspiracy theories and been on the fringe, and that seems to be a currency that is more acceptable with this administration, they are seeing their chance," Rosenberg said. "That’s really unfortunate, that’s not what most people would expect from their government."

Heartland must leave behind inflammatory rhetoric if it wants to take on mainstream climate science in a serious, academic way that is meticulously researched, Michaels said this week. He has endorsed an administrative critique of climate science but only if it is done academically.

Some other prominent climate scientists who have challenged the mainstream are reluctant to work with Heartland. Judith Curry, a former professor at the School of Earth and Atmospheric Sciences at the Georgia Institute of Technology and prominent climate skeptic, supports Pruitt’s red-team approach and wants to explore uncertainties and potential flaws in climate modeling. But she said it will only work if serious researchers conduct the work, and she questioned how much influence Heartland has at EPA.

"They kind of get the B-list people involved, it’s really not the best thinkers, it’s a lot of people with an agenda, so it’s not quite the group of people I want to work with," Curry said.

Heartland is ready for its moment, spokesman Lakely said. Turning to Heartland is only natural for an administration that wants to look outside "radical leftist environmental groups" to craft policy, he said.

"These guys are serious scientists and they are routinely smeared in stories, in the words by scientists, scientists on the other side, from NOAA and other places," Lakely said. "And so it does go both ways, and I think it’s not helpful to the debate we need to have about what is actually happening and what we can do about it, if anything."