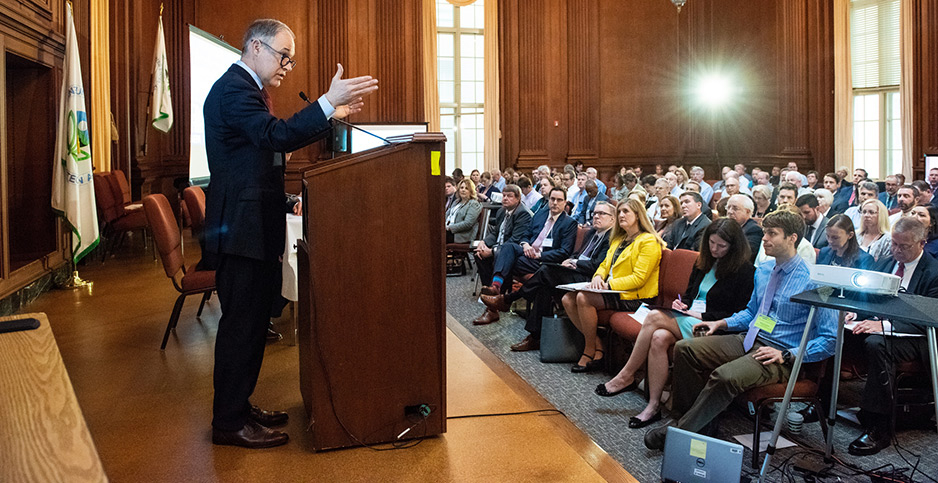 EPA Administrator Scott Pruitt this morning announced a series of concrete steps to address health concerns associated with a class of nonstick chemicals at an event marred by mishandling of the press.

EPA guards allowed reporters listed on an email printout to attend the first hour of the two-day event, which was livestreamed on the agency’s website, as well.

But reporters from the Associated Press and CNN, news organizations that have been sharply criticized by the EPA press office or President Trump, along with E&E News were not allowed in. The journalist from AP, who tried to enter the event before E&E News arrived, reported she was forcibly removed from the headquarters building by security guards after asking to speak to a public affairs person.

EPA spokesman Jahan Wilcox claimed in a statement that the reporters were excluded because the room the summit was held in was only "able to accommodate 10 news outlets." The agency has also decided to open the afternoon portion of the event to all reporters.

Inside the headquarters building, Pruitt said "there are concerns about these chemicals across the country because of their persistence, their durability, getting into the environment and impacting communities in an adverse way — that’s why we’re here today."

To alleviate those concerns, the administrator committed EPA to taking four steps to better regulate the chemicals, which have been linked to cancer and developmental problems.

First, he pledged to consider establishing a binding maximum contaminant level (MCL) for perfluorooctanesulfonic and perfluorooctanoic acids, or PFOS and PFOA.

EPA has already set a health advisory for those two types of PFAS, which U.S. manufacturers voluntarily phased out the use of in 2015. But PFOA and PFOS can still be found in products imported from China and other countries.

"The process needs to begin," Pruitt said. "The determination of an MCL is something that we will begin in earnest post this meeting, and I look forward to your contribution to that very important issue in the next day and a half."

Pruitt also committed the agency to developing groundwater cleanup recommendations for PFOA and PFOS "by the fall of this year." Those will help guide the remediation of several Superfund sites and other areas contaminated by the chemicals.

A related promise is to start "the necessary steps" to declare PFOA and PFOS as hazardous substances, Pruitt said. That would allow EPA to hold companies liable for polluting lands and waters with those chemicals.

Finally, the administrator said EPA is "going to take action in close collaboration with our federal and state partners to develop toxicity values for GenX and PFBS," two other types of PFAS. "That should be done by December of this year."

After the summit is concluded, top EPA officials plan to visit Michigan, New Hampshire and other states affected by PFAS contamination. A study released today from the nonprofit Environmental Working Group estimates that more than 1,500 drinking water systems, serving up to 110 million customers across the country, may be contaminated with PFOA, PFOS and similar chemicals.

"We will take the information we’ve gleaned from both the summit today and the community visits over the next month and a half … to draft a national PFAS management plan," Pruitt said. "And that will be done by the fall of this year.

"It’s an historical day because we are coming together as state and federal partners, local communities recognizing that this should be and must be a national priority and that we are going to be taking concrete steps as an agency to address that along with you at the state and local level," the administrator concluded. "So I’m looking forward to the outcomes."

Not mentioned by the administrator or any of the speakers who followed him before the livestream ended was a delayed toxicology study of four PFAS chemicals that the Agency for Toxic Substances and Disease Registry earlier this year was poised to conclude were more harmful than previously thought.

That set off alarm bells on Jan. 30 in the White House and EPA, which met with the chemical industry to discuss PFAS the following day. The delayed report, news of which has prompted bipartisan outrage on Capitol Hill, has still not been released (E&E News PM, May 21).

The summit has so far done little to alleviate some lawmakers’ concerns. Rep. Carol Shea-Porter (D-N.H.), for instance, slammed EPA for its handling of both the delayed PFAS health study and some reporters at today’s event.

"Our communities deserve answers, and the EPA seems to be doing everything in its control to block the public from getting them," she said. "It’s reprehensible. The EPA needs to open this summit to reporters and the public so they can ask important questions about the EPA’s response to the unacceptable groundwater contamination that is affecting our communities nationwide. The administration needs to release the [ATSDR] study immediately."