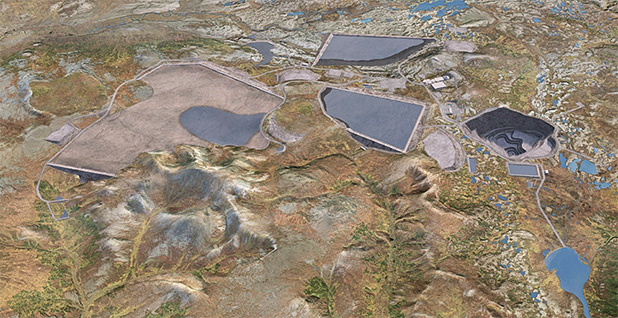 A digital simulation of the proposed Pebble mine in Bristol Bay, Alaska. Army Corps of Engineers

EPA signaled yesterday that it may not stand in the way of the Army Corps of Engineers’ permitting process of the Pebble mine in Alaska.

At issue was a budding dispute between the agencies over the potential water impacts of the copper and gold proposal in southwestern Alaska.

In a letter to the Army Corps last July, EPA said the mine "may have substantial and unacceptable adverse impacts" on aquatic resources of national importance, including Bristol Bay’s salmon fishery.

That notification, known as a 3(a) letter, initiated a dispute resolution process called "elevation" spelled out in an agreement between the Army Corps and EPA under Section 404(q) of the Clean Water Act.

Should issues in the first letter go unresolved, EPA may intensify its initial language that a project "may affect" aquatic resources of national importance with a 3(b) letter stating that it "will affect" them.

EPA asked the Army Corps for more time to consider a 3(b) letter on three occasions as EPA General Counsel Matt Leopold and other officials contemplated escalation (Greenwire, July 22, 2019).

Yesterday EPA opted out of a 3(b) letter, instead clearing the way for the Army Corps Alaska District to continue the permitting process without official interagency mediation.

"EPA has elected not to continue its elevation process with the Army Corps of Engineers as part of the Corps’ evaluation of the proposed Pebble mine project," an EPA spokesperson said.

"EPA will continue working with the Corps outside of the formal elevation process as the Corps completes its review of this proposed project," the spokesperson said.

The agency stopped short of using "will affect" language, instead saying parts of the project "may well contribute to the permanent loss of 2,292 acres of wetlands and other waters."

The Army Corps plans to release the Pebble mine’s final environmental impact statement in June or July. A record of decision will follow at least 30 days later.

That would be a significant milestone for a project that has been more than a decade in the making and facing sustained opposition.

Pebble Partnership CEO Tom Collier welcomed this week’s developments. "This determination by the EPA is another indication of positive progress for the project," he said.

Joel Reynolds, a senior attorney and Western director for the Natural Resources Defense Council, said EPA is essentially caving to the Army Corps on Pebble, especially since the new administration set aside years of research from the Obama team.

"The political fix has been delivered," said Reynolds. "I don’t think this has anything to do with science or procedural integrity."

If the Army Corps permits the mine, EPA could veto all or some dredge-and-fill approvals under Section 404(c) of the Clean Water Act. The Obama administration had moved to preemptively veto the mine, but litigation and the changing administration scuttled those plans.

The Trump team has not ruled out a veto, but Collier said he believes one is now unlikely.

"Today’s decision not to file a 3(b) letter gives us more reason to believe that there will be no veto," Collier said in a statement. "This is consistent with our observation that USACE and EPA, and other cooperating agencies, have been working well together to resolve all outstanding issues."

As for Collier’s prediction that EPA will not veto a Pebble permit, Bristol disagreed. "Pebble’s claim this decision is a preview of a no veto decision by EPA is like much of what Pebble says, pure fantasy," he said.

The fate of Pebble may depend on who wins the White House in November and whether Pebble can continue to muster the resources to push through more years of litigation.