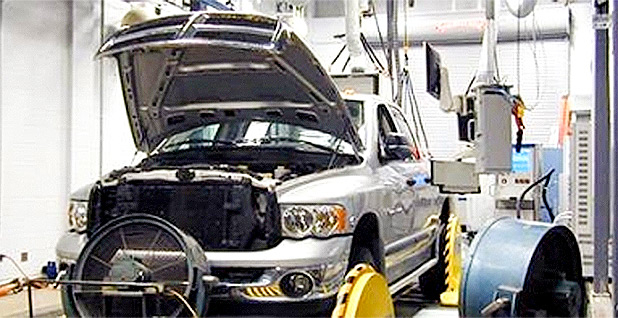 U.S. EPA is considering making the auto industry pay to ensure that cars and trucks comply with vehicle emissions standards.

The move is aimed at replacing federal money that could be eliminated as part of White House budget cuts. The Trump administration has proposed gutting federal funding for EPA’s vehicle program and halving its staff before gradually but fully filling the $48 million shortfall with increased industry fees.

But automakers and equipment manufacturers, which already pay more than $18 million annually in fees, are expected to balk at the changes. Environmental groups say funding the program with industry money could compromise EPA’s work. And former officials warned that the move could limit the agency’s enforcement of vehicle emissions rules.

"If this cut goes forward and becomes part of the law, it will shut down the EPA laboratory and the automotive industry," said Margo Oge, who led the Office of Transportation and Air Quality from 1994 to 2012. EPA, she said, "won’t be able to do its job."

The agency recently expanded its vehicle testing following the discovery that Volkswagen AG had been cheating on emissions standards. Since then, it has discovered that at least one other automaker, Fiat Chrysler Automobiles NV, may have misled regulators.

Engineers test the vehicles at a state-of-the-art lab in Ann Arbor, Mich., the National Vehicle and Fuel Emissions Laboratory.

The Clean Air Act requires automakers to get certification for their vehicles before selling them in the United States, and the process has grown more demanding as both technology and regulations have advanced.

"This administration may want to rubber-stamp it, which is illegal," said Oge.

The cost-cutting proposal came in a March 21 memo from David Bloom, the agency’s acting chief financial officer, explaining how the agency could meet a 31 percent budget cut. The Washington Post first reported on the internal document.

EPA is seeking to replace federal cash for dozens of programs like clean air grants or Energy Star with state or private funding. The agency would also eliminate or reduce many of its programs related to climate change or greenhouse gas emissions.

The proposed budget cuts from the White House "require us to think about the work we do and how we do it, the way we are organized and the geographic location and spaces we occupy," Bloom wrote in the memo.

EPA department heads must still review, provide feedback on and certify the plan. Congress is unlikely to approve cuts as deep as those proposed by the White House.

The EPA plan proposes slashing $48 million in federal cash, a 98 percent cut, from the vehicles testing program. About 168 people also would be cut from the program, a 54 percent reduction.

The entire program, however, is not slated for elimination. Updating the fees "as soon as possible" and "the increment of additional collections" could "recover the full costs of the program, in time for implementation in FY 2018," according to the memo.

But switching the program entirely to industry funds would require legislation and rulemaking that could drag on for years. In the meantime, the lab would not have enough resources to operate, several former lab directors said.

Congress would have to amend the Clean Air Act to redirect existing fees from the Treasury to EPA. And EPA would have to surmount industry challenges to increase fees.

"It’s hard to imagine how, in the short term, where the cuts go into effect much more rapidly, it wouldn’t have a terrible impact, even under the most optimistic scenarios," said Michael Walsh, who led the vehicles office in the late 1970s.

He now advises other countries, including China, on vehicle pollution control and says EPA’s lab serves as a model and pioneer around the world.

A doubling of fees on the industry

The industry is unlikely to warm to the increased fees, which would require roughly doubling what it now pays.

Automakers alone contribute roughly $10 million a year to the program, paying a $24,770 fee to certify each new model group. The fees comes out to around 41 cents per car sold in the United States, according to a 2004 EPA estimate.

That contribution falls short of the full cost of the program, according to a 2011 report by the EPA Office of Inspector General that recommended a fee increase.

Industry would have to come up with at least an additional $20 million to fully replace the lost federal cash.

"Automakers place great importance on certification and compliance matters," Gloria Bergquist, a spokeswoman for the Alliance of Automobile Manufacturers, said in an email. "Since certification is a Clean Air Act requirement, vehicles that have not been certified cannot be shipped from plants or docks. Whatever the agency decides to do, automakers will want to avoid any delays in the certification process that could increase vehicle costs and limit vehicle availability to market."

Environmental advocates say they fear that the industry funds might impede EPA’s mission.

"I would be concerned, if the industry funds go directly towards certification activities, whether that gives industry the ability to place some constraints on the protocols for that office," said Therese Langer, the transportation program director at the American Council for an Energy-Efficient Economy. "You don’t have to look any further than Volkswagen and conclude that, if anything, we need to be dramatically stepping up the attention that is paid to these activities right now."