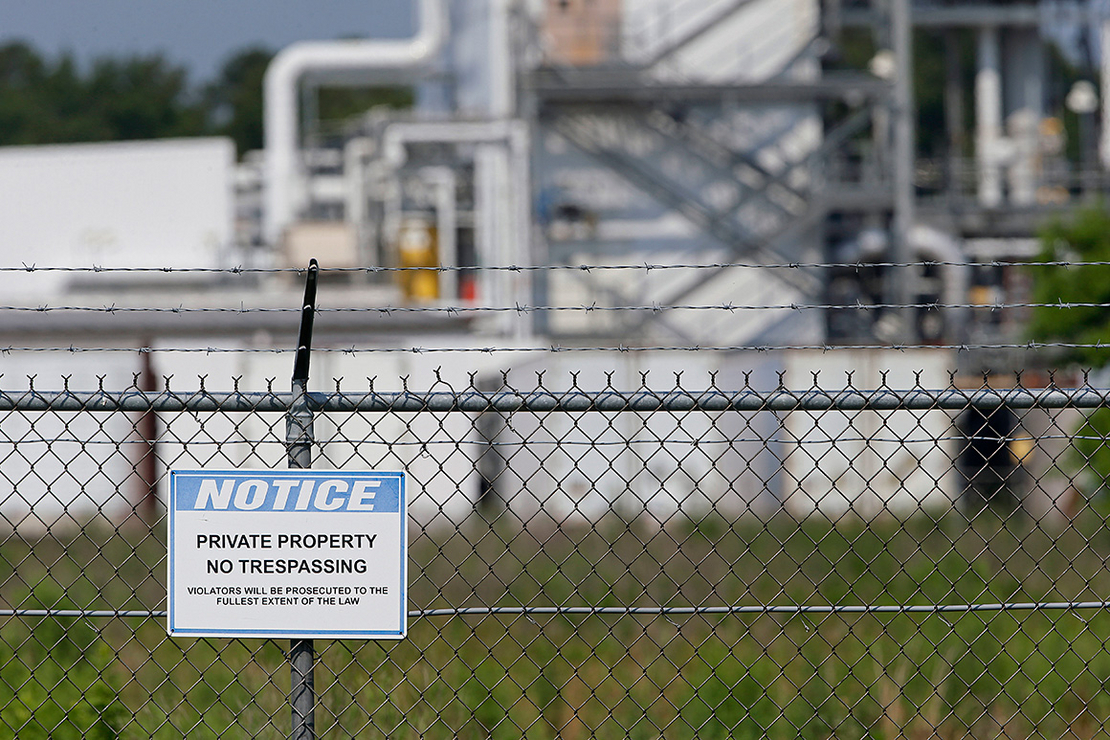 This photo taken Friday, June 15, 2018, near Fayetteville, N.C., shows a trespassing sign near the Chemours Co. PPA facility at the Fayetteville Works plant, where the Delaware-based company produces the chemical known as GenX. The chemical has been found in the Cape Fear River, a source of drinking water for much of the southeastern part of the state. AP Photo/Gerry Broome

Hot off the heels of releasing its PFAS road map last week, EPA has found that a deeply controversial “forever chemical” that has contaminated drinking water in North Carolina is, indeed, toxic to humans and will be subject to a drinking water advisory.

The long-awaited toxicity assessment for GenX marks a key step in the Biden administration’s approach to tackling public health and environmental problems tied to chemicals known as per-and polyfluoroalkyl substances.

GenX has been linked to liver and blood problems, as well as certain types of cancer. People are exposed to the compound through drinking water, most notoriously in North Carolina, with 350,000 people served water contaminated with GenX.

That national crisis helped catapult current EPA Administrator Michael Regan into the spotlight when, as the former head of North Carolina’s environmental department, he faced off against GenX manufacturer Chemours Co., resulting in a massive consent decree.

EPA has been pushed to regulate the chemical in drinking water, with many citing links to an increase in cancer and other diseases. Regan has meanwhile cited his experience with the compound as North Carolina’s top environmental regulator as a motivation for taking swift federal action on PFAS more broadly (Greenwire, July 21).

EPA Assistant Administrator for Water Radhika Fox said the GenX toxicity assessment “establishes a foundation for informed decision making” in the form of a drinking water advisory. She added the document is a key component of the agency’s road map for addressing PFAS overall.

“This science-based final assessment marks a critical step in the process of establishing a national drinking water health advisory for GenX chemicals and provides important information to our partners that can be used to protect communities where these chemicals are found,” Fox said.

Toxicity assessments are useful tools in protecting public health because they set “reference doses” for chemicals estimating how much a person can safely ingest daily over their lifetime without having adverse health impacts. The next step for EPA will be to combine the toxicity assessment with an analysis of how people are exposed to the same chemical from different sources in order to determine what levels of a chemical are safe in different mediums of exposure, such as drinking water or food, and which groups — such as pregnant people, infants, breastfeeding people — are most vulnerable to GenX exposure. The agency will then combine those three analyses in a drinking water advisory.

The new assessment sets chronic and subchronic reference doses for GenX at 3 parts per trillion per day and 30 ppt per day, respectively. That’s much lower than EPA’s 2018 draft toxicity assessment for the compound, which set chronic and subchronic reference doses at 80 ppt and 200 ppt per day, respectively.

EPA attributes the lower doses in the final toxicity assessment to new research on GenX’s health impacts that has been published in intervening years. The agency is not alleging any political interference by the Trump administration in the GenX assessment, though the Biden administration has blamed its predecessor for underestimating the toxicity of other PFAS compounds.

Betsy Southerland, a former top scientist in EPA’s Office of Water, said the new document was a solid start for developing a drinking water advisory.

“I have full confidence that this is rigorously derived science,” she said

The announcement comes on the heels of EPA’s PFAS road map, unveiled last week after months of anticipation. That sweeping vision for tackling the chemicals will see offices across the agency working together on a crackdown, including drinking water regulations for PFOA and PFOS, the two most researched chemicals, as well as hazardous substance designation for those two compounds under Superfund law. A massive national testing strategy is also underway as EPA mulls further regulations (Greenwire, Oct. 18).

But EPA has already faced criticism over the plan, given the agency’s failure to commit to what advocates have long pushed for: class-based regulation. Many impacted communities have expressed concern that they will be overlooked, particularly given the regulatory community’s bigger focus on long-chain PFAS, rather than their short-chain replacements like GenX.

Industry members have cited studies showing short-chain PFAS appear to linger for reduced periods in the body, lessening their threat to human health. Critics say that doesn’t change the impact short-chain chemicals have had in their communities.

As part of its announcement, EPA also said it would revisit the 2016 reference doses for PFOA and PFOS, which have long come under fire from critics who say they are not strict enough. Melanie Benesh, an attorney with the Environmental Working Group, called that move “welcome news” and noted the values will be the basis for EPA’s proposed drinking water limits for those chemicals, expected this coming spring.

In a separate statement, Benesh said the toxicity values marked an “important step” but that EPA must do more for communities.

“The EPA should use this toxicity value to require polluters to report all GenX releases, create enforceable limits on GenX emissions, get GenX out of drinking water, and require cleanup of GenX at contaminated sites,” she said.

The announcement marks a major arc for Regan, who rose to national prominence tackling environmental issues, including the GenX crisis. Local North Carolina groups have consistently hoped the EPA chief will take a particular interest in their struggles, even as they have criticized the agency for not moving fast enough.

GenX — a trade name for a processing aid technology designed to replace PFOA — is among the most controversial short-chain PFAS due to the havoc the compound has caused in North Carolina. That contamination has spurred massive litigation and led to ongoing health fears for communities. Local advocates said this morning that they had not yet had time to review the toxicity assessment but appeared hopeful that regulation might be coming.

Last week, some of those groups put out a response to the PFAS road map welcoming certain elements but arguing more is needed. Several were invited to the agency’s road map announcement, but expressed dismay that EPA still has not granted a petition that would require Chemours to provide health and environmental data on more than 50 PFAS.

Dana Sargent, who leads the group Cape Fear River Watch, said at the time she was “grateful” for EPA’s announcement but expressed hope “that the Administration will require this testing specifically for communities such as ours — which have been contaminated by a toxic mix of PFAS for decades.”

Thom Sueta, a spokesperson for Chemours, said the company is still reviewing “the significant body of technical information” present in the assessment. He said Chemours is looking in particular for insight into the new review process used by EPA, “including the application of revised uncertainty factors to reflect greater uncertainty” since the 2018 draft assessment.

“We are unaware of data that would support the conclusions drawn by the agency,” Sueta said.

Despite misgivings from local groups, Regan has emphasized repairing trust with impacted communities in his comments about PFAS. He has billed the issue a “top priority” since taking over the agency, and in his announcement last week, the administrator appealed to communities like those in North Carolina (E&E News PM, Oct. 18).

“I’ve heard you, we’ve learned from you, and we are learning from your experience,” Regan told an audience gathered in his home state as he announced the PFAS road map.

Emily Donovan, co-founder of the group Clean Cape Fear, said that on its face EPA’s announcement was “validating” after years of fighting for acknowledgment. She also emphasized that the findings should put more pressure on the agency to address PFAS across the board, rather than in smaller groups.

“GenX was supposed to be the ‘less toxic’ alternative to PFOA,” Donovan said. “I think this is a loud and clear reminder we need to regulate PFAS as a class.”