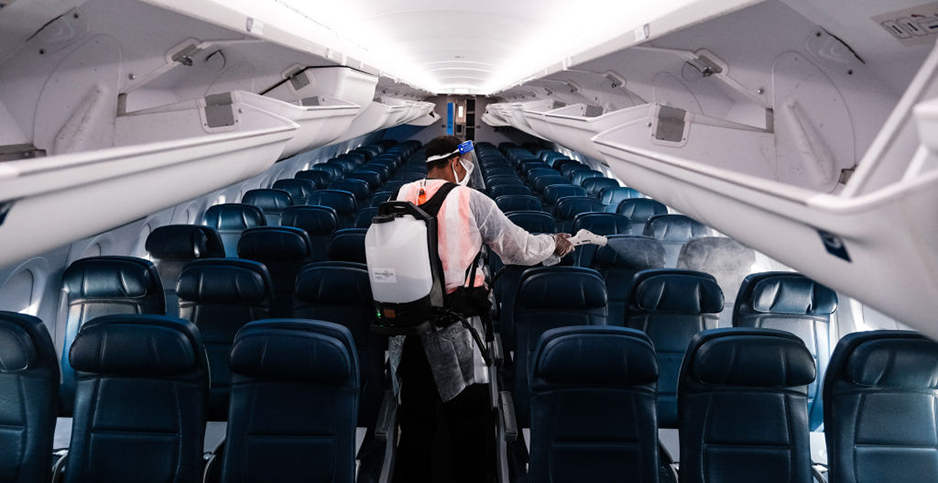 An airport employee performs an aircraft disinfecting demonstration aboard a Delta plane at Ronald Reagan National Airport on July 22, 2020, in Arlington, Va. Michael A. McCoy/Getty Images

EPA has ordered the maker of a disinfectant approved and touted by the Trump administration to cease sale and distribution, finding the company in violation of federal regulations.

In an announcement yesterday afternoon, EPA said it had issued a Stop Sale, Use or Removal Order to the company Allied BioScience for its product SurfaceWise2. That disinfectant is a residual antimicrobial surface coating, authorized for first-of-its-kind emergency use in several states under former President Trump to combat the spread of COVID-19 — including for use by American Airlines.

But EPA said it investigated the product and found that its performance was "less reliable under real-world conditions, particularly when it is exposed to moisture or abrasion." The agency concluded Allied BioScience was representing its product in a way that was inconsistent with federal pesticide law, as well as the terms and conditions of an emergency authorization.

"Pesticides can cause serious harm to human health and the environment, which is why EPA requires their registration before being distributed for use," Larry Starfield, acting assistant administrator for EPA’s Office of Enforcement and Compliance Assurance, said in a statement. "EPA is committed to holding companies accountable for not adhering to federal environmental laws."

The announcement is an abrupt about-face on the disinfectant. In August 2020, EPA issued an emergency authorization of the product for use in Texas.

"EPA had to adapt to the coronavirus outbreak by creating a new permitting process that could allow innovative new products to be quickly and effectively tested and deemed safe for use," Wheeler said at the time, adding that the disinfectant "is a great innovation" that "could help the aviation industry in the coming months."

SurfaceWise2 was ultimately approved in Arkansas and Oklahoma on Jan. 19, just before the Biden administration took office.

The product was used on American Airlines aircraft and facilities, as well as in two Texas-based orthopedic facilities.

Pressure on EPA to approve a slew of disinfectants has been common throughout the pandemic.

Some companies have argued that their products are key to reopening shuttered parts of the economy (like theater stages), while environmental groups have warned against rushing approval for chemicals with unclear impacts (Greenwire, April 13).

While the Trump administration appeared eager to greenlight some approvals, the Biden EPA is seemingly taking a different approach.

In its announcement yesterday regarding SurfaceWise2, EPA said that it was revoking emergency use in all states where it had been approved, citing "company misconduct" and "scientific concerns regarding product performance."

American Airlines spokesperson Martha Thomas confirmed via email that the company has stopped using the disinfectant, which was only used in Texas. "We will continue to follow all EPA and federal guidance on this matter," Thomas said.

Allied BioScience did not respond to a request for comment.

In its announcement, EPA noted guidance from the Centers for Disease Control and Prevention stating that the risk of transmission for COVID-19 from touching a contaminated surface is considered quite low. As a result, "removing this unregistered product from the market does not endanger human health or limit the fight against the virus," EPA concluded.