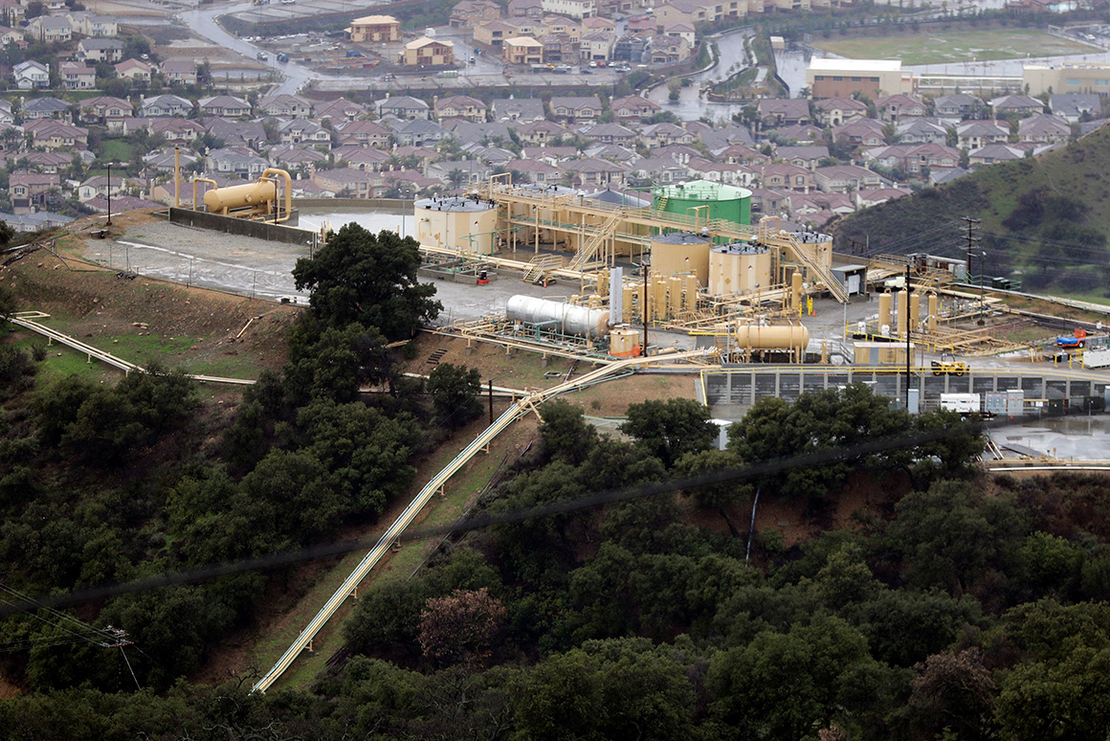 EPA Administrator Michael Regan confirmed earlier this month that his agency plans to focus on gas-fired power in its updated carbon rule for new power plants.

But how to do it raises a barrage of legal and technological questions that will have implications for how — and whether — the United States can decarbonize its power grid.

The forthcoming rule would replace a 2015 standard that’s still on the books and covers carbon from new coal and new gas power plants. While the Obama-era rule effectively mandates that new coal-fired units reduce emissions through partial carbon capture and storage, its requirements for gas are lax enough to be met easily by most new builds.

Now EPA is preparing to ask gas plants to do more.

Regan told an audience at CERAWeek by S&P Global in Houston two weeks ago that EPA would release a white paper this spring on “readily available” mitigation techniques for new natural gas combustion turbines, followed by a public comment period, final paper and draft rule later this year.

Instead of laying out policy, he said, the paper “frames the public dialogue on approaches to reduce climate pollution from new gas-fired units.”

EPA told E&E News that the paper would be out in the next few weeks.

In starting with a white paper, EPA is adding at least one step to its usual rulemaking process. Typically, the agency would roll out a so-called advanced notice of proposed rulemaking to signal its intent to regulate and collect information on technologies and measures that should form the basis for a rule.

But EPA has started work on this as it awaits a Supreme Court decision that could make regulating for climate change harder, at least until Congress passes a new law. While the new power plant carbon rule isn’t the focus of West Virginia v. EPA, an expansive decision in that case could curtail the agency’s regulatory authority in ways that would affect it.

Kyle Danish, a partner with Van Ness Feldman LLP, said EPA might be hesitant to tip its hand on what it thinks its regulatory options are ahead of the decision, which is due in June.

“It may not want to antagonize the Supreme Court,” he said.

Utility experts say a new gas plant rule that seeks to limit carbon beyond what could be accomplished through simple heat-rate improvements on-site likely would be based either on co-firing of gas with a lower-carbon fuel like hydrogen or on carbon capture and storage, called CCS.

Both options present their own challenges. And experts say that a rule based on them might have broader implications for the power system if they make new gas plants less competitive and shift the industry toward reliance on older gas and new renewables.

“There’s actually a reasonable amount of experience with hydrogen burning in gas turbines,” said John Larsen, who leads energy and climate research at the Rhodium Group.

In fact, General Electric Co.’s website says hydrogen is currently burning in more than 100 of its gas-fired units worldwide. Los Angeles is converting four gas-fired power plants to burn 100 percent hydrogen over the next few years.

Burning hydrogen doesn’t release CO2. So the higher the percentage of bonded hydrogen, or H2, in a fuel mix relative to gas, the lower its carbon intensity.

But co-firing hydrogen presents some challenges that could offset the climate benefit of cleaner combustion at a gas plant and others that threaten the environmental justice objectives at the heart of the Biden administration’s climate agenda.

Another question is how the H2 is made. If fossil fuels-based power or methane is used in its production, the fuel’s upstream emissions could be high even if it has no emissions when burned on-site at the gas plant.

“If all they’re considering is the emissions at the power plant, then in terms of the life cycle emissions you’re not making any progress at all,” said Michael O’Boyle, director of electricity policy Energy Innovation.

But “green, or blue, or pink or whatever color of the rainbow,” he said, hydrogen has another molecular property that presents a problem: It burns very hot. That means more nitrogen oxides producing more air pollution to affect the health of people who live and work near the power plant.

And since power generation is frequently located in low-income and minority communities, the increased smog could create more burdens for the same communities the Biden EPA has promised would see the benefit of its investments and rulemakings.

Both the life cycle emissions and NOx problems could have regulatory fixes if EPA implements them and the courts allow it.

Larsen said the agency in the past generally has not considered life cycle emissions from upstream fossil fuels use when constructing rules under Section 111 of the Clean Air Act, which will be used again for new power plant carbon. But EPA signaled in a past rulemaking that considered biomass co-firing at coal plants that rules based on co-firing might be an exception, he said.

Another issue is that hydrogen production is now stretched to capacity, and an EPA standard based on H2 would encourage the industry to expand. But Larsen said a rule that steered production toward green hydrogen might pay dividends in driving down life cycle emissions for hydrogen used in steel production and other industrial uses.

EPA also sets standards for NOx at new gas plants and could lower those limits as part of this rulemaking. The agency has said it is exploring ways to account for the cumulative impact of pollution on front-line communities.

EPA could opt to base its new source performance standard not on a cleaner fuel mix at gas plants but on an assumption that power companies will capture and store a share of emissions from combustion.

The Obama EPA considered partial CCS in its 2015 rule for new gas plants but determined that it was cost-prohibitive and not readily available.

That calculus might have changed in the intervening years. Net Power LLC last year delivered emissions-free power from natural gas for the first time at its plant in La Porte, Texas (Energywire, Nov. 17, 2021).

“I think there’s a tendency to say, ‘It’s not ready yet,'” she said. “But at some point, these rules are supposed to be technology forcing.”

Modeling shows that once the cost of CCS comes down slightly its deployment will increase, she said. But there are other considerations EPA would need to grapple with before basing its rule on CCS, she said — including whether utilities would have access to geological sequestration for carbon and around legal liability for sequestration.

Danish of Van Ness Feldman said EPA would need to show that whatever technology it bases its gas plant rule on met cost and demonstration considerations laid out in the Clean Air Act. Either CCS or hydrogen could present challenges in the short term, he said.

But EPA might consider taking the rule in stages, he said, setting a laxer requirement in the earlier years and tightening it at a later date when control technologies such as CCS or hydrogen co-firing are more mature.

If EPA writes a rule that makes it harder or more costly for utilities to bring new gas plants online, that’s likely to have implications for the whole power grid.

The Obama rule stayed on the books throughout the Trump administration — despite a proposal to repeal it — because it set meaningful requirements only for new coal-fired power. Utilities aren’t planning to build any of those anyway.

But there is new gas-fired power in the construction pipeline. A 2021 Rhodium Group analysis showed that anywhere from 42 to 158 gigawatts of new gas capacity is projected to be built through 2030 depending on fuel prices and renewable energy costs.

While new gas can compete with renewable power, gas capacity also plays a backup role when the wind isn’t blowing or the sun isn’t shining.

“I don’t know that EPA can or should think about gas plants separately from how it effects the whole resource mix,” said Dallas Burtraw, a senior fellow at Resources for the Future. The energy system, he said, “is a system.”

Danish said EPA could introduce subcategories in its rule that set less stringent standards for peaking units that only run when needed to ensure grid reliability.

“If they’re not running all the time, maybe they’re not emitting as much,” he said. “Maybe we’re not as concerned about slapping carbon capture on those plants.”

O’Boyle said part of the new source standard’s contribution to decarbonizing the power grid would be creating a price hurdle that might dissuade some utilities from building new gas-fired units at all.

“I think there would be positive emissions benefits associated with the standard based on either H2 blending or CCS, not because you would see a lot more of these technologies coming online necessarily, but also because the cost of new natural gas would increase,” he said. “It would push them towards more deployment of renewables and storage and leaning on the existing gas fleet for whatever services they need from dispatchable power, at least in the near term.”

An Energy Innovation analysis for 2030 shows that it would be possible to retire all existing coal-fired power by that year and power the grid with renewable energy and batteries — with today’s gas-fired power plants supplying 20 percent of U.S. electricity.

Older gas-fired power plants are slightly more carbon-intensive on average than newer models. But a rule that slows investment in new gas-fired power likely would lessen the number of legacy fossil fuels plants that would be running in future decades, when the United States and the rest of the world must cut CO2 emissions to zero to avoid the worst impacts of climate change.

Whatever EPA does with its new source rule for gas plants, the move is unlikely on its own to deliver President Biden’s promise of decarbonizing the grid by 2035.

That still demands long-term incentives for renewable power and other policies that only can be delivered legislatively.

“I think Congress needs to act,” O’Boyle said. “There’s really no way around it.”