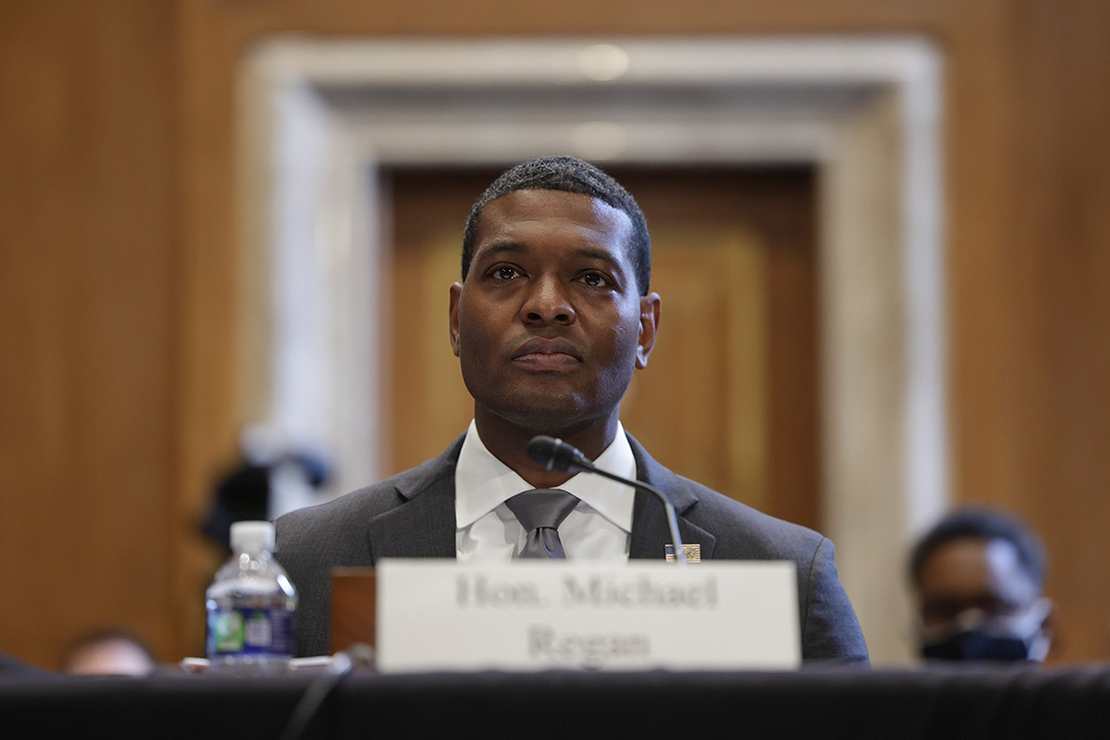 EPA Administrator Michael Regan testifying before the Senate Environment and Public Works Committee in April. His agency's ability to regulate greenhouse gases in the power sector was thrown into turmoil by the Supreme Court. Kevin Dietsch/Getty Images

Regulators at EPA will have to draft fresh carbon rules for power plants without knowing if they’ll survive the legal uncertainty created by the Supreme Court’s climate decision last month.

That thrusts the agency into a yearslong process of writing rules to reduce power sector emissions with the risk that whatever they do could run afoul of the high court.

If EPA runs repeatedly into legal dead ends as it refines its understanding of what the court will accept, it would leave the power grid unregulated for carbon for much of the decade, while potentially leading regulators to offer insufficient climate rules that might be accepted by the conservative court.

The casualty could be President Joe Biden’s climate goals, including his objective of cutting the sector’s carbon output 80 percent by 2030 and making it net-zero five years later.

“I’m not sure that the court’s intent was to create uncertainty, but I also don’t get the sense that the conservative justices will mind if the uncertainty that this decision foments causes agencies like EPA to disfavor creative solutions to new problems,” said Lisa Heinzerling in an interview. She wrote the winning briefs in a 2007 Supreme Court case that established EPA’s authority to regulate greenhouse gases.

EPA is preparing to offer new proposals next year to replace the Obama-era standard, known as the Clean Power Plan, at the heart of the court’s landmark decision last month in West Virginia v. EPA.

Agency air chief Joe Goffman told E&E News the agency has been “focusing on a menu of several different options for our power plant proposal and those options remain on the table.”

“We will screen any proposal through the court’s decision as we move forward with our outreach and plan to issue a proposal early next year,” he said.

But the high court has offered EPA few pointers on how to write rules for new and existing power plants that could survive judicial challenges. In West Virginia, it said fuel-switching is out of bounds, but avoided weighing in on other regulatory models that might have given the agency a road map. The court’s six conservative justices embraced an emerging legal doctrine that demands regulatory agencies show explicit statutory instructions from Congress for virtually any meaningful rule they might draft.

The so-called major questions doctrine will make it harder for agencies to do their jobs, while arming their opponents with a powerful new tool, said Thomas Lorenzen, a partner at Crowell & Moring.

“If you are a challenger of agency rulemaking, the upside of the major questions doctrine is that it creates a lot of uncertainty about what the courts will let agencies writ broad do,” he said. “If you are EPA or another federal agency, it’s a worry because you will not know until you try it whether a particular rulemaking approach will survive judicial scrutiny.”

Some see that as ironic. The Supreme Court’s surprise decision last year to take up the challenge by West Virginia, along with other red states and coal companies, to a 2015 climate rule that never took effect was seen as a bid by the court to help shape future EPA regulation.

Instead, it left almost no shape at all.

The court appeared to leave EPA with numerous options for reining in emissions at coal- and gas-fired power plants, without providing any certainty that those pathways would actually be accepted by the current justices.

Nathan Richardson, a law professor at the University of South Carolina, said EPA could fall into a trap of spending years crafting a rule that could be undone.

“The environmental groups are out there — and I understand why they do this — saying ‘Look, this isn’t the end of the world. In fact, many important things, maybe the most important things, that can be done under 111(d) of the Clean Air Act are still available,’” he said. “That’s true, but we’re just going to be here again in a year or two or three.”

The ambiguities of the decision will likely color the power plant rules EPA proposes next year. And without assurances of how much deference the agency can expect from federal courts, EPA may shelve options that could deliver deeper emissions cuts.

The majority opinion written by Chief Justice John Roberts went out of its way to say the court had “no occasion” to decide many of the thorniest questions about how the Clean Air Act can be used to regulate climate emissions.

But that doesn’t mean the court won’t ultimately weigh in on them.

For example, the opinion doesn’t settle whether the Clean Air Act requires EPA to stay inside the fence line at fossil fuel power plants, as former President Donald Trump’s EPA claimed. Nor did it say how the court would approach a rule that seeks to transform the sector by forcing the adoption of technology like carbon capture and storage.

It does clarify that future rules would be considered through the lens of the major questions doctrine, which holds that Congress must provide explicit guidance before an agency introduces an economically or politically significant policy. But the standard for that is vague.

That’s a problem, Heinzerling said on a panel last week hosted by Resources for the Future, because rulemakings take years and agencies will be anxious to ensure that they pass legal muster.

“It would just be good to know, what is the administrative law landscape for these agencies?” she said. “I don’t think the court is doing anybody any service by being silent.”

The Roberts opinion looks narrowly at the Clean Power Plan, which was finalized in 2015 and sought to cut about a third of existing power plant emissions by 2030 by ramping down coal and boosting clean energy. The narrowness of the West Virginia decision has led some environmentalists to proclaim the agency can use emissions averaging, technologies like carbon capture and co-firing, and even carbon trading.

But experts cautioned that the court’s silence on those options didn’t signal its approval. Heinzerling said Roberts’ modus operandi has been to “explain a decision on narrow grounds, then rule more broadly in subsequent cases.”

But additional cases take additional time. And EPA doesn’t have years to lose.

The United States already looks poised to blow past its second commitment to the Paris Agreement, which was introduced last year and promised to cut overall emissions in half by the end of this decade (Climatewire, July 8).

The Biden White House has not said how — or whether — it envisions meeting that target.

The administration is already running out of time to implement a lasting set of power plant rules. Proposals for new and existing power plants were originally slated for this summer but were pushed to next year in part due to a need to incorporate the results of the West Virginia case (Energywire, June 22).

The new timeline means litigation will likely extend beyond Biden’s first term in office, leaving the rules vulnerable to reversal.

Richardson said delays of this kind have plagued past efforts to make progress on climate change.

Former President Barack Obama waited until his seventh year in office to finalize the Clean Power Plan, a rule his administration started previewing years earlier during the battle over climate legislation in 2009 and 2010. Biden’s delays are more understandable, said Richardson, because it made sense to wait until the Supreme Court had its say.

But they still play into the hands of anti-regulatory litigants who hope that meaningful climate rules never take effect.

Environmentalists and advisers in past Democratic administrations said the agency still has tools to write a strong rule, if not a transformational one.

Stan Meiburg, a former EPA career official who served as acting deputy administrator from 2014 to 2017, said he had been asked by reporters since the ruling two weeks ago whether EPA would hold back when writing new rules or whether it would still be aggressive.

His answer to both was “yes.”

He expectes the agency to digest the court’s opinion and assess how it could get the most emissions reductions through a more limited trading option or through on-site upgrades that go beyond the narrow heat-rate measures introduced under Trump.

“At the same time, I cannot believe that the opinion was particularly a surprise to EPA. And they are going to try to find exactly that right point that pushes the envelope as far as they think they can go and still make it through Supreme Court review,” Meiburg said.

Jeff Holmstead, a partner at Bracewell LLC, said the court’s decision makes EPA’s job easier by managing the expectations of its allies in the climate movement who might otherwise have agitated for a rule that’s much stronger than the Clean Power Plan.

Had the court waited to show its cards until EPA had a rule in hand, he said, the agency “would have been under a lot of pressure to do something creative and aggressive to meet the president’s goal, knowing that that was unlikely to stand up in court.”

“But now that pressure is sort of taken away,” Holmstead said.