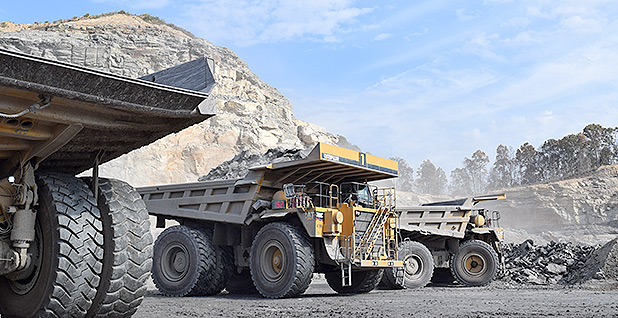 Trucks haul away rock at a Kentucky mountaintop removal coal mine. Photo by Dylan Brown.

A West Virginia federal judge’s order requiring U.S. EPA to evaluate coal industry job losses imposes "substantive obligations" and has "no basis in the statute," attorneys for the agency argued in a filing yesterday.

In an opening brief, the Justice Department asked the 4th U.S. Circuit Court of Appeals to reverse the order and instruct the lower court to either dismiss the case or rule in favor of the agency.

The order was "outside the bounds of the court’s authority," Department of Justice attorneys told the appeals court. At a minimum, they said, the 4th Circuit should issue a new "straightforward" injunction that tracks with the Clean Air Act.

At issue is last month’s decision by U.S. District Court Judge John Preston Bailey for the Northern District of West Virginia to require EPA to submit by July 1 an evaluation of how its Clean Air Act regulations affect coal jobs, mine closures and power plant shutdowns.

Bailey agreed with Murray Energy Corp., which filed a lawsuit in 2014, that EPA failed to comply with a section of the law requiring continuing economic evaluations of its regulations. He issued the July 1 deadline after finding that EPA’s initial plan to comply with the provision was insufficient (Greenwire, Jan. 12).

While most of the court action in the lawsuit took place during the Obama administration, the Trump DOJ moved to appeal the ruling earlier this month.

The government, in its opening brief, raised both procedural and substantive arguments against’s Murray’s claims in the lawsuit. Murray CEO Robert Murray is a major Trump supporter.

The district court, DOJ argued, did not have the jurisdiction to hear Murray’s claims because the Clean Air Act did not impose an enforceable mandatory duty on EPA to evaluate job losses.

The government is also arguing that Murray lacked standing to bring the lawsuit because the firm couldn’t point to specific harms caused by EPA’s alleged failure to do the economic evaluations.

"Murray alleges that the coal industry as a whole is economically distressed, but the company did not provide any ‘specific facts’ showing that it specifically has been harmed," EPA’s brief said.

Even if it crosses the procedural thresholds, the 4th Circuit should still reverse the order because EPA already did the required evaluations, EPA’s brief argues.

The agency pointed to 64 documents that it says analyzed the economic impacts of its actions — even if those evaluations weren’t specifically done to comply with the Clean Air Act section at issue.

"Individually and collectively," the brief says, "EPA’s documents evaluate the ‘potential loss or shifts of employment which may result from the administration or enforcement’ of the CAA."

Judge Bailey’s order goes "far beyond" the Clean Air Act by requiring evaluations not just on economic shifts but on how coal "families" and "communities" may be at risk, the brief said.

Murray’s response is due on March 31.

"EPA has for years now sought to shirk its obligation to evaluate the loss and shifts in employment from its actions under the Clean Air Act," Murray said in an earlier court filing.

A trio of three West Virginia environmental groups yesterday urged the 4th Circuit to allow them to intervene in the case. Bailey previously denied the groups’ December motion to intervene, saying it was moot because the case had been decided.

But the Mon Valley Clean Air Coalition, the Ohio Valley Environmental Coalition and Keeper of the Mountains Foundation argued that their concerns in the case are still relevant.

In a brief, they told the 4th Circuit that they’re worried the Trump administration will "abandon" its defense of EPA in the suit.

The groups pointed to a separate case in the 5th U.S. Circuit Court of Appeals in which the new administration decided to withdraw an appeal to a Texas district court’s nationwide injunction against enforcing the Obama administration’s transgender bathroom guidelines.

It is "not speculative" to worry that the administration "will not similarly alter its position on the overriding issue of the propriety of a nationwide injunction in the present litigation," the environmentalists said, "which involves issues every bit as intensely debated in the recent election as the issues involved in the Texas litigation."