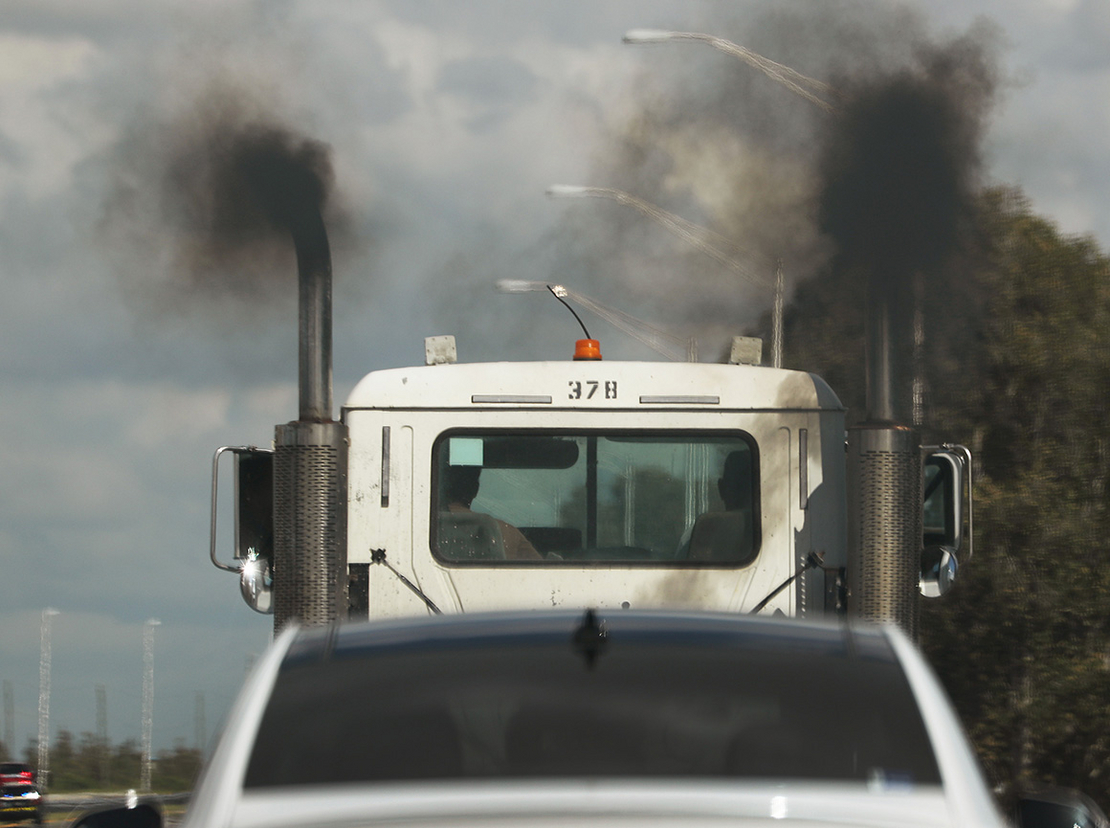 Smoke pours from the exhaust pipes on a truck on Nov. 5, 2019, in Miami. Today, the Biden administration unveiled a proposal to cut down emissions from heavy-duty trucks. Joe Raedle/Getty Images

For the first time in more than two decades, EPA is moving to significantly cut smog-forming emissions from new 18-wheelers and other heavy-duty trucks, but the agency has not yet decided exactly how aggressively to proceed.

In a draft rule released this morning as part of a broader Biden administration initiative to cut tailpipe pollution, the agency is offering two options for curbing emissions of nitrogen oxides from gas- and diesel-fueled trucks.

While both would strengthen standards starting in model year 2027, the first would implement the tighter limits in two phases, with the second phase following in 2031; by that point, the standards would be 90 percent tighter than the status quo, according to an agency summary. The other, less stringent, option, would go no further after 2027.

An estimated 72 million Americans live near truck freight routes in the United States and are more likely to have lower income and be people of color, EPA Administrator Michael Regan said this morning at a White House announcement that also featured Vice President Kamala Harris and Transportation Secretary Pete Buttigieg. The proposed changes “will deliver much-needed protections to our most vulnerable communities” during the transition to cleaner alternatives, Regan said.

EPA will take feedback on both options. The draft’s release came five days after the White House regulations office completed a routine review that lasted almost three months. The agency hopes to make a final decision by December.

Nitrogen oxides (NOx) are a major contributor to the formation of ozone, a lung irritant that is the key ingredient in smog. EPA last tightened emissions standards for heavy-duty trucks in 2001. The new proposal comes almost six years after the California-based South Coast Air Quality Management District and other state and local regulators petitioned EPA to strengthen the current limit of 0.2 gram of NOx per brake horsepower-hour (E&E News PM, June 3, 2016).

Heavy-duty trucks are major sources of NOx; adoption of the more stringent option would prevent at least 860 premature deaths annually by 2045, along with some 6,700 hospital admissions and emergency room visits, according to EPA.

In proposing the two alternatives, the draft appears to reflect the tension between engine makers on one side and environmental groups and some states on the other (Climatewire, Jan. 18).

In a statement, the National Association of Clean Air Agencies, whose members include the bulk of state and local regulators, called for a federal rule at least as strict as that adopted two years ago by California and including a 90 percent cut in the emissions limit for new trucks by model year 2027.

In a separate news release, Truck and Engine Manufacturers Association President Jed Mandel stopped short of endorsing a specific option, but said the trade group looks forward to working with EPA to ensure that the final version “is practical, technically feasible, cost-effective, and will result in the necessary fleet turnover to achieve the nation’s environmental objective.”

Other parts of what EPA labels the Clean Trucks Plan include tightening Phase 2 greenhouse gas emissions standards for heavy-duty trucks by model year 2027, followed by Phase 3 standards by 2030. The agency also plans to proceed with tougher emissions limits for medium-duty commercial vehicles by 2027, in combination with new standards for light-duty standards.

The administration also announced today that it is tapping money from last year’s infrastructure act to help state and local governments buy electric transit buses or other cleaner-running models, while EPA is awarding $17 million to pay for zero-emission and low-emission school buses. The Energy Department is proceeding with $127 million in first-time funding on cutting costs and bolstering durability in hydrogen and battery electric trucks, according to a White House news release.