EPA found a ‘typo’ in its carbon rule. Why it matters 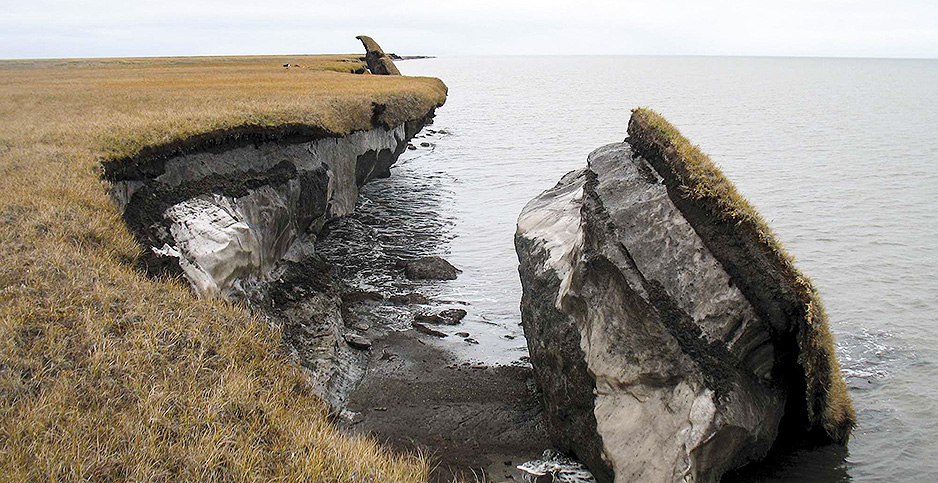 The Trump administration's analysis of the social cost of carbon appeared to focus on the Lower 48 states, excluding Alaska and Hawaii. Melting permafrost caused a bluff to erode at Drew Point, Alaska. Benjamin Jones/U.S. Geological Survey/Flickr

When EPA released its Affordable Clean Energy rule last month, it appeared to leave Alaska, Hawaii and U.S. territories out of its cost-benefit analysis.

The regulatory impact analysis for the power plant carbon rule — posted on EPA’s website on June 19, a few hours after the rule itself — included language strongly hinting that displaced Alaskan villages and flooded Hawaiian coastal infrastructure had never been part of the Trump administration’s controversial accounting for the cost of climate change to the American economy.

That appears to have been a mistake.

A spokesperson for EPA called it a "typo" in an email last Tuesday and two days later reported that the "typo" had been corrected.

But how, exactly, the Trump administration arrived at its carbon cost estimates remains unclear.

The Trump administration has used the so-called interim domestic social cost of carbon estimates to justify the ACE rule and a handful of other administration regulatory actions over the last two years.

Before E&E News inquired about the issue, EPA’s regulatory document stated that the estimates "account for the direct impacts of climate change that are anticipated to occur within the contiguous 48 states."

That sentence seemed to imply that carbon cost estimates — which environmental economists already criticize as artificially low because they exclude climate-related economic pain outside of U.S. borders — might also ignore impacts for two states and five U.S. territories.

If the line was an error, last year’s proposed version of the ACE rule included it, too. And it caught the eye of analysts at New York University School of Law’s Institute for Policy Integrity.

"The arbitrary limitation of EPA’s ‘domestic-only’ focus is highlighted by the fact that the regulatory impact analysis reports that the social cost of greenhouse gas estimates actually only cover effects to the contiguous 48 states, meaning some of the most climate-vulnerable areas of the United States — Alaska, Hawaii, Puerto Rico, other island and maritime territories, and military bases located outside U.S. borders — are all omitted," wrote the Institute for Policy Integrity and partners, including the Union of Concerned Scientists and Natural Resources Defense Council, in comments to EPA.

The states and territories in question all have coastlines that would be affected by up to 3.2 feet of sea-level rise this century, according to last year’s National Climate Assessment.

That peer-reviewed assessment by experts at 13 federal agencies estimated that more than $19 billion in Hawaiian infrastructure could be flooded due to sea-level rise. Puerto Rico’s government has estimated it will cost almost $140 billion to recover from Hurricane Maria, and the NCA says climate change will make hyperactive hurricane seasons like 2017 more common.

"We are warming faster than any other part of the country," said Andy Moderow, state director for the Alaska Wilderness League. "Leaving Alaska out, if they did that, is just absurd."

The extent to which the architects of the interim domestic social cost of carbon, or SC-CO2, considered Alaska and Hawaii is still unclear. The administration has provided some information about how it developed the estimates it uses in rulemakings like ACE, but questions remain about key inputs and assumptions.

Critics say the three models that were used to develop the SC-CO2 — called DICE, FUND and PAGE — don’t easily lend themselves to the kind of U.S.-only approximation of climate damages the Trump administration wanted for its rulemakings. They’re tested and peer-reviewed to calculate global damages.

"They claim they’re able to pull these domestic-only numbers out of the underlying models, but they don’t really describe how they’re doing that," Schwartz said.

The PAGE and FUND models don’t include Alaska and Hawaii in the same region as the Lower 48 states. The PAGE model is based on the length of the world’s coastlines, and the SC-CO2 assigns the United States a proportion. The DICE model relies on gross domestic product, so the Trump estimate has assumed the United States will see 10% of global climate damages in proportion to its global share of GDP.

The Obama administration used averaged results from the same three integrated assessment models for its global social cost of carbon, which underpinned scores of federal actions like the Clean Power Plan. Obama’s last social cost of carbon estimated damages at $42 per ton of CO2 in 2020 and $70 by 2050.

But congressional Republicans complained that under Obama’s global social cost of carbon, U.S. industry and consumers were being asked to pay for climate benefits in other countries. So Trump issued an executive order in March 2017 that interpreted a George W. Bush-era directive to limit estimates for benefits to the United States. The Trump administration’s values also steeply discount losses decades in the future.

The end result is that the Trump administration’s estimates are as low as $1 per ton in the ACE rule and elsewhere.

"They looked for two dials that would reduce the social cost of carbon as much as possible, they found them, and they turned them," said Michael Greenstone, a chief economist at the Council of Economic Advisers under Obama.

The lower the estimate for the cost of carbon, the costlier cutting carbon looks. Because it used the U.S.-only figures, the ACE rule’s cost-benefit analysis showed the rule’s relatively modest costs exceeded its benefits by nearly $1 billion over 15 years.

‘Cream in your coffee’

In the Tuesday email to E&E News — in which the sentence about "48 contiguous states" was described as a "typo" — the EPA spokesperson said "impacts occurring in Hawaii, Alaska, or U.S. territories are reflected to the extent they are included in the default versions of the integrated assessment models that are used to estimate the SC-CO2."

A question about whether those states and territories were included in default versions of the models went unanswered.

"The vagueness of the U.S. government’s answer to your question plus their earlier mistake seems to indicate that the government does not know," said Peter Howard, the Institute for Policy Integrity’s economics director.

EPA has now "corrected" the line in its ACE document to read: "The SC-CO2 estimates used in this RIA account for the direct impacts of climate change that are anticipated to occur within the United States."

The SC-CO2 has also been used in Bureau of Land Management and EPA rules for wasted gas and leaked methane from oil and gas development. The 9th U.S. Circuit Court of Appeals ruled in 2008 that federal agencies must assign a value to changes in greenhouse gas emissions from regulations.

Environmentalists say a domestic-only figure doesn’t sufficiently capture impacts like mosquito-borne illnesses that spread around the world or disruptions to international supply chains. And it encourages other countries to disregard damages in the United States.

"If the pollution is going to spread around the world, like cream in your coffee, evenly and affect everywhere, then you have to account for the damage that’s done everywhere," said David Doniger, senior strategic director of NRDC’s Climate and Clean Energy program. "We want the Chinese, we want the Europeans, we want everyone in the world who emits carbon pollution to care about and account for damage they’re doing to us.

"The quid pro quo is we have to care about them."