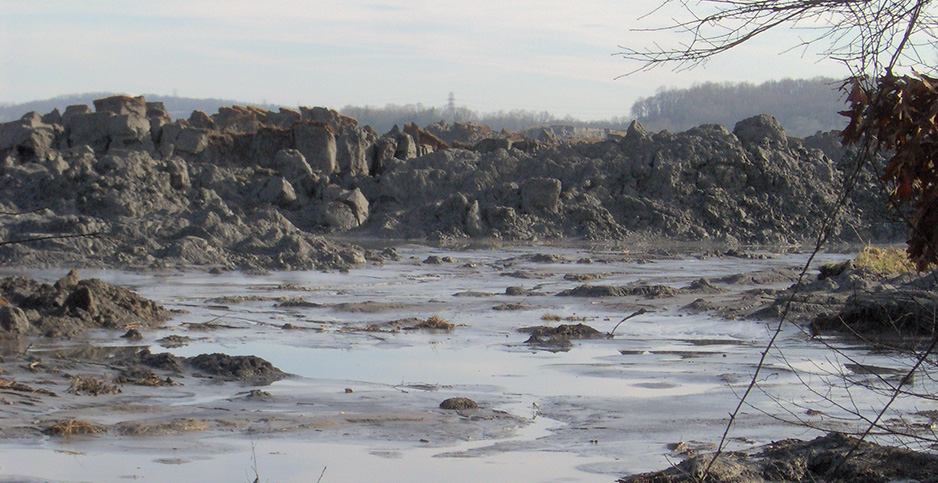 The Trump administration has released a new rule on management of coal ash retention ponds. The 2008 TVA Kingston Fossil Plant spill, pictured about 1 mile from the retention pond, was a major environmental disaster. Brian Stansberry/Wikimedia

Under the new rule, operators have until next April to stop adding more coal combustion residuals into storage sites that lack leak prevention or are not at least 5 feet from an aquifer.

This August was the deadline EPA suggested in its rule proposal last year. In the final version, EPA cited new data revealing more unlined and leaky impoundments than a 2015 analysis showed.

The rule also gives the public more access to information about how utilities manage coal ash.

EPA started regulating coal ash disposal in 2015 to prevent disasters like the 2008 spill at a Tennessee Valley Authority plant in Kingston, Tenn., that released millions of cubic yards of toxic waste into two rivers.

Although coal ash is officially classified as nonhazardous, EPA has previously admitted that storage ponds leach heavy metals at "levels of concern."

With power producers staring down billions of dollars in cleanup bills, the Trump administration proposed a series of amendments to add flexibility to "one-size-fits-all" regulations.

The U.S. Court of Appeals for the District of Columbia Circuit undercut those in 2018 (Greenwire, Aug. 29, 2018). In a unanimous decision, the judges found that the Obama-era standards were too lenient, tossing three provisions allowing unlined ponds to operate indefinitely as long as there was no evidence of groundwater contamination.

The new rule reclassifies clay-lined ponds as unlined impoundments to align with the court ruling.

But if operators prove to EPA that they need more time to develop an alternative means of disposal, the deadline falls back to 2024. And if some part of the associated power plant is shutting down, storage ponds larger than 40 acres don’t need to close until 2028.

Companies with these larger coal ash ponds could get extensions bringing the completion of closure to 2038, Lisa Evans, an Earthjustice attorney, said in an interview.

"The final rule boils down to giving industry more time to operate surface impoundments, despite the court ruling," Evans said. "Their highest priority is to serve the interest of the coal electric industry."

More than 700 coal ash ponds exist across the county, according to an analysis by Earthjustice and the Environmental Integrity Project. The groups also found unsafe groundwater levels at more than 90% of coal-fired power plants that report monitoring data.

Industry argues that the extension recognizes the technical challenges of meeting the deadline. Evans said the rule puts industry’s interests first and comes at the expense of clean drinking water, lakes and rivers.