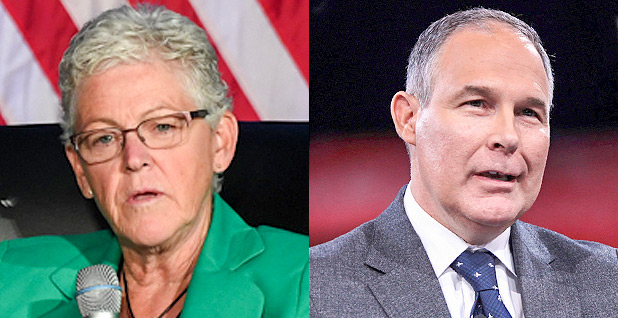 U.S. EPA has given the Trump team a report detailing the status of major Obama administration policies, which could become a playbook for the incoming administration vowing to scrap many of those rules.

The 76-page document offers a straightforward summary of major EPA rules that have recently been finalized or are in the pipeline, in addition to charts of key staffers and offices and details about congressional committees with jurisdiction over the agency.

The document appears to have been prepared on Nov. 10, two days after Donald Trump clinched the presidential election. It was released to E&E News this week in response to a Freedom of Information Act request.

EPA’s handbook offers a starting point for the Trump transition team led by Myron Ebell, an outspoken critic of climate science and many Obama environmental rules. He and the other members of the Trump EPA landing team are hustling to prepare a policy agenda for the incoming administration, which has promised to restructure the agency.

Trump’s pick to lead EPA, Oklahoma Attorney General Scott Pruitt (R), has been a leader in fighting some of the Obama EPA’s signature policies in court — including the Clean Power Plan Rule to cut power plants’ greenhouse gas emissions and the Clean Water Rule aimed at defining which waters are subject to Clean Water Act protections.

Those and other major rules are expected to be on the chopping block when the Trump administration takes over.

EPA’s document also summarized some of the major rules that are still pending, all of which are likely to get a close look from the incoming Trump team.

Scott Segal, an industry lobbyist at Bracewell LLP, said today that "not all rules are created equal" when it comes to unraveling them.

"Some rules are purely at the discretion of the EPA based on political priorities of the agency," he said. "Some rules are required either by statute or by settlement agreement. … It’s obviously far easier to eliminate rules that are based purely on EPA discretion."

Segal called the transition document a "helpful summary," but added, "It’s safe to say that those who follow the EPA closely would have known the contents of a document like this well prior to November. It’s not the keys to the kingdom."

The EPA transition document appears to be standard fare during a presidential transition.

Bob Sussman, who helped lead the Obama EPA transition team in 2008, said his team received something similar from the outgoing George W. Bush administration. The EPA team at the time received additional information from agency staffers in response to their requests.

At other agencies, requests from the Trump transition team have raised hackles. At the Energy Department, for example, queries about which staffers have worked on climate initiatives have sparked concerns among career employees.

The New York Times reported yesterday that a Trump transition team request to the State Department has similarly spooked employees. The team asked State employees to submit details about programs and positions that promote gender equality, rousing fears that the incoming administration could roll back some of those programs, the paper reported (see related story).

Some EPA staffers are wary of how the incoming administration will deal with their agency (which Trump has previously advocated dismantling) and their work. Employees became even more nervous after seeing the DOE questions targeting those who worked on climate issues (Greenwire, Dec. 12).

The Trump team has since sought distance from the DOE memo. A transition official was quoted saying the DOE questions were not "standard protocol" and that the "person who sent it has been properly counseled" (E&E News PM, Dec. 14).