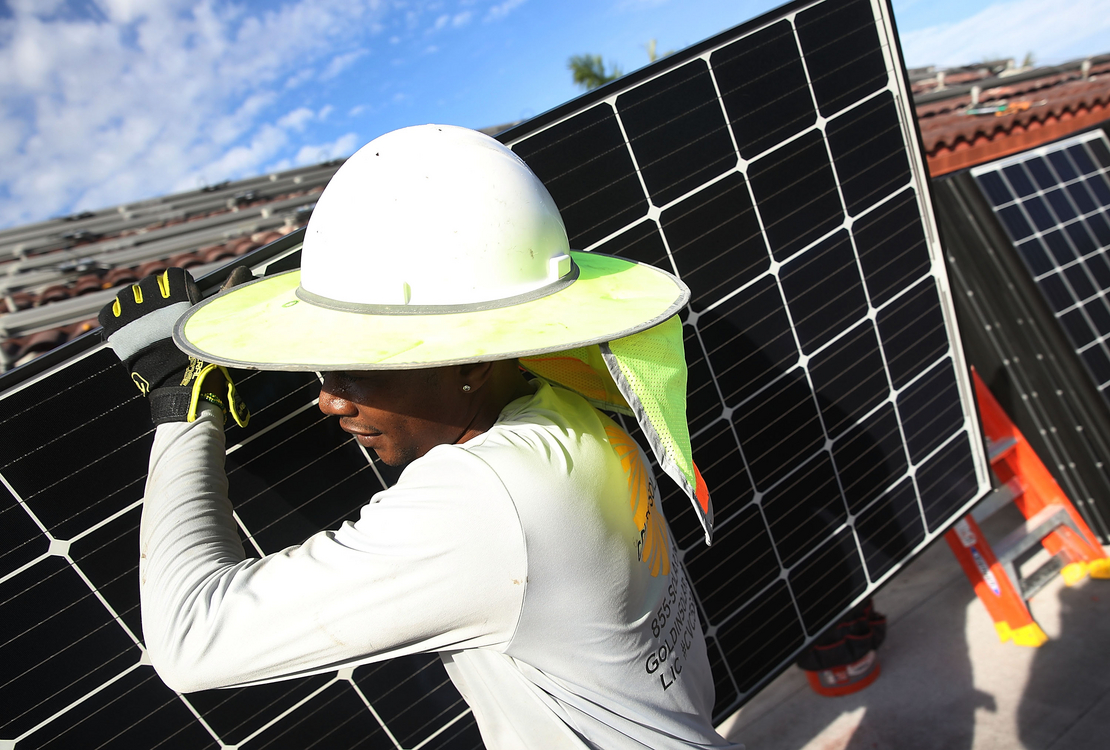 Roger Garbey, from the Goldin Solar company, installs a solar panel system on the roof of a home in Palmetto Bay, Fla. Joe Raedle/Getty Images

A $27 billion EPA fund meant to curb planet-warming emissions should be used to support climate projects in disadvantaged areas — and use an existing network of financiers to do so, say community development advocates and green groups.

At issue is the Greenhouse Gas Reduction Fund, a key provision of the Inflation Reduction Act that aims to leverage federal dollars to provide communities across the country with low-cost, flexible financing for clean energy projects.

The EPA-administered program will work by granting billions of dollars to nonprofit organizations, who then will dole out the money to local lenders that specialize in green financing and community development lending (Climatewire, July 29).

The public comment period on the program ended Monday. A range of groups offered opinions on a diverse set of issues, including how the financing should be structured, what types of projects should be prioritized, as well as how — and through whom — the money should flow.

Fewer than 40 letters have been made public so far.

But the comment letters reviewed by E&E News suggest that one top issue for EPA will be deciding which organizations, as well as how many organizations, should receive $20 billion that comprise the measure’s “general fund.” The other $7 billion will go directly to states, territories, local governments and tribal governments.

A wide range of groups are calling on EPA to grant that bucket of money — $8 billion of which is required to go to low-income and disadvantaged communities — to multiple organizations that have relationships with communities on the front lines of climate change.

But one influential group, the Coalition for Green Capital (CGC), says the fund should be used to create a national green bank, which would be in charge of allocating the money. For decades, the Coalition for Green Capital has argued that a national green bank is the most effective way to ensure dollars are distributed quickly with proper oversight.

Notably, the White House announced Monday that Jahi Wise, who currently serves as a special assistant to President Joe Biden for climate policy and finance, will head the fund. Wise previously directed policy at the Coalition for Green Capital (E&E News PM, Dec. 5).

Others disagree. Community development experts, credit union trade groups and environmental organizations say it would be a mistake to pump $20 billion into a potentially new Washington, D.C.-based entity with no proven track record — or historic ties to the communities that need the funding most.

“Concentrating all resources into a single national green bank runs a high risk of excluding community development and green finance intermediates and increases the risk that funds will not be deployed on a timely basis and to the populations the [fund] is designed to serve,” wrote Inclusiv, an association of credit unions that serve low-income communities.

The Coalition for Green Capital plans to apply for grant funding. Inclusiv has not yet made a final decision but anticipates applying either on its own or as part of a larger consortium.

Experts with the University of New Hampshire’s Carsey School of Public Policy, doubled down on that point, raising concerns about political and financial risks that could arise if a national green bank ran into administrative difficulties. Further, they warned against “concentrating power in a single entity, particularly to the extent that it does not have the highest levels of accountability to and partnership with low-income communities in place.”

Instead, Inclusiv and others say, investments should be directed to multiple non profit organizations that are already plugged into the country’s vast network of credit unions, banks and other financiers that specialize in serving disadvantaged communities (Climatewire, Dec 6, 2021).

“While it may feel like the one entity is expedient, it also carries the risk of limiting innovating and potentially serving as a dam of capital flowing into low income and disadvantaged communities,” said Adam Kent, a senior adviser at the Natural Resources Defense Council’s Green Finance Center.

“For those reasons, we really do think that the risks outweigh the benefits,” Kent said, also noting that it would make sense to use some funds to stand up new green banks in parts of the country where climate finance lacks.

To be sure, that isn’t all the commentators care about. Other key issues entail what types of projects should be prioritized — and what types of financing should be used to facilitate them.

Advocacy groups including Americans for Financial Reform, Rewiring America and the Greenlining Institute, for instance, said in a letter that “smaller-dollar, community-oriented projects should make up a considerable portion of the portfolio of projects financed from the fund” to ensure the money reduces emissions — and boosts the quality of life in disadvantaged communities.

They were also among the groups who emphasized the importance of a mix of funding types — grants, loans and low-cost loans — are made available to meet the needs of different customers.

“For example, grants to cover the upfront cost of starting a contractor firm could help individuals from underrepresented groups build sustainable business in communities. Even while deploying some grants, other financing support from the Fund could continue to ensure the Fund’s continued operability,” the groups wrote.