EPA has no records to support Pruitt’s warming claims 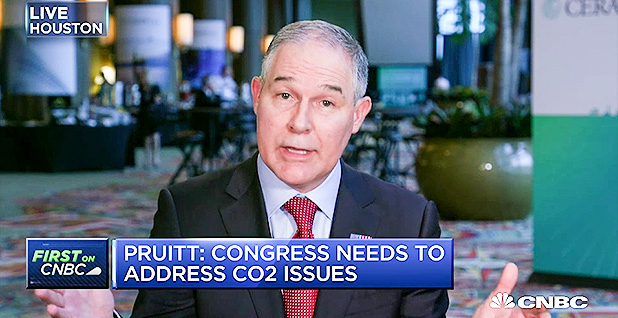 EPA has not produced any scientific evidence to support the claims of former EPA Administrator Scott Pruitt that humans are not primary contributors to climate change.

Public Employees for Environmental Responsibility has fought EPA in court for more than a year to produce scientific evidence for Pruitt’s claims, which he made on CNBC’s "Squawk Box."

Earlier this month, EPA appeared to acknowledge that it did not have any records that would support Pruitt’s claims and produced 12 pages of emails showing his staff’s correspondence with the show’s producers.

"In addition to the above search, EPA presented the twelve pages of material … to the former administrator before his departure from the agency and asked him if he was aware of any other agency records that he relied upon to make the statement on the Squawk Box appearance," EPA attorney Jennifer Hammitt wrote. "The former administrator identified no additional responsive records."

A few weeks after he became EPA administrator, Pruitt appeared on CNBC’s "Squawk Box," where he was asked about carbon dioxide and climate change. He said, "I would not agree that it’s a primary contributor to the global warming that we see."

The next day, Public Employees for Environmental Responsibility, or PEER, filed a Freedom of Information Act request seeking the studies Pruitt used to make his claims. Specifically, the group requested "EPA documents that support the conclusion that human activity is not the largest factor driving global climate change."

EPA fought that FOIA request, but in June, the U.S. District Court for the District of Columbia ordered it to produce scientific evidence that supports Pruitt’s claim. This week, PEER said the inability of EPA to respond showed Pruitt did not have any scientific backing for his claims.