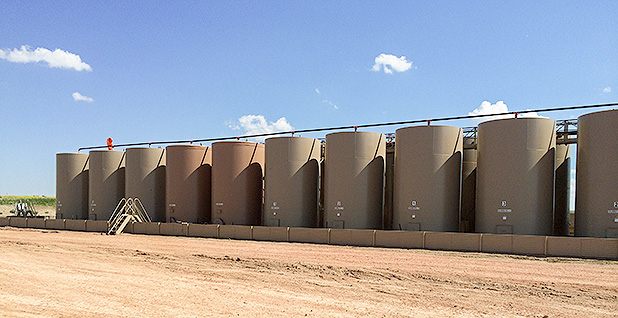 The Continental Resources Inc. oil well site near Alexander, N.D., where Zachary Buckles was found dead in April 2014. U.S. EPA is looking into the circumstances of his death, along with another death in 2012. Mike Soraghan/E&E News

The agency has asked Continental Resources Inc. and Marathon Oil Corp. for information to determine whether their operations violated the Clean Air Act on the days the workers died.

The inquiries were launched in September 2016 by officials in EPA’s Denver regional office. Letters to the companies ask for details about the deaths of Dustin Bergsing and Zachary Buckles.

Bergsing, 21, died in January 2012 at a Marathon well near Killdeer. Buckles, 20, died in April 2014 at a Continental well near Alexander. Both men were "flow testers," assigned to regularly measure tank levels by hand. Each was found slumped near a tank hatch.

The National Institute for Occupational Safety and Health (NIOSH) has identified at least seven other oil-field deaths where such vapors were suspected of killing workers (Energywire, April 13, 2015).

The letters from EPA’s assistant regional administrator for enforcement, Suzanne Bohan, were posted online after a Freedom of Information Act request by the Environmental Integrity Project (EIP). An EPA spokeswoman declined to provide additional information, saying the investigation remains active. Continental and Marathon representatives did not respond to requests for comment.

It’s rare, but not unprecedented, for EPA to investigate for environmental violations after an accident that injured or killed workers, said Eric Schaeffer, who ran EPA’s Office of Civil Enforcement from 1997 to 2002.

"If they release enough to kill somebody, that means it’s pretty potent," said Schaeffer, now executive director of EIP.

He noted that EPA brought an enforcement case after the 2005 explosion at a BP refinery in Texas that killed 15 workers and injured more than 170 people.

Joel Mintz, a former EPA official who is now a law professor at Nova Southeastern University, said it could indicate that EPA is looking at criminal violations. That would involve showing that someone knowingly allowed hazardous emissions.

"There are some pretty serious penalties that apply," said Mintz, author of "Enforcement at the EPA: High Stakes and Hard Choices." But he added, "It can’t be a pure accident."

Schaeffer said EPA might not even be looking at civil or criminal sanctions. Officials could simply be looking for more information about a problem they want to understand better.

"It’s pretty much doing your job to check these," Schaeffer said.

The hazards of toxic vapors spewing out of crude oil tanks in shale fields have been an emerging topic in worker safety circles.

All crude oil has compounds called volatile hydrocarbons such as benzene, butane and propane. Shale crude, such as the oil produced in North Dakota’s Bakken Shale play and Colorado’s Niobrara Shale formation, sometimes has more of these compounds than conventional oil. It’s related to why shale crude is more prone to explode in rail cars.

Safety and health officials say the volatile petrochemicals can whoosh out of crude oil tanks with enough force to knock off a worker’s helmet. The vapors can disorient people to the point that they are unable to escape the lethal effect of the vapors. And at high concentrations, the hydrocarbons can push oxygen out of the air to the point that they asphyxiate victims, even outdoors (Energywire, Sept. 14, 2015).

The Occupational Safety and Health Administration (OSHA) and others have issued safety alerts warning companies and their workers about the hazard. NIOSH repeatedly has recommended that crude should be measured without workers opening hatches and peering in.

Bergsing died in January 2012 at a remote Marathon site near Killdeer. A co-worker found him slumped below the open hatch of a tank of Bakken Shale crude oil. An autopsy found he died of "hydrocarbon poisoning due to inhalation of petroleum vapors."

OSHA investigators decided not to fine Bergsing’s employer, Across Big Sky Flow Testing, after noting there was no indication of hydrogen sulfide poisoning.

But the state workers’ compensation agency approved a claim for Bergsing’s daughter to receive death benefits. Marathon settled a lawsuit brought by Bergsing’s mother for an undisclosed sum described by her attorney as "very substantial."

An environmental engineer in Marathon’s Dickinson, N.D., regional office had told attorneys for Bergsing’s family that he’d been warning his bosses they were creating a dangerous buildup of lethal gases in their tanks. But, he said, they ignored him (Energywire, Oct. 27, 2014).

In a sworn statement, he said Marathon configured its well site operations in a way that boosted profits by making initial production seem higher than it really was. But it also created a hazard by diverting more gas into the tanks.

Buckles was found on a catwalk at a Continental Resources well site across the Missouri River from Williston.

In Buckles’ case, inhalation of "petroleum vapor exposure" was listed on the state death report among "other significant conditions" along with obesity. The state forensic examiner listed the cause of death as cardiac arrhythmia (Energywire, July 8, 2014). The manner of death is listed as "undetermined."

A spokeswoman for Continental Resources said in 2014 that the company "is not aware of any dangers from hydrocarbon vapors or VOCs at any of our locations."

But OSHA fined Buckles’ employer, Black Gold Testing, saying the company didn’t prepare him for those dangers. The company went out of business, OSHA officials said, but agreed to pay the $2,800 fine.

According to the Montana news site Last Best News, Buckles’ family sued Continental and others in February 2015. The suit alleged Buckles was exposed to deadly vapors without adequate air monitoring equipment or training.

Beyond the threat of immediate death, testing by NIOSH has shown that tank gaugers can be exposed to unsafe levels of benzene, a carcinogen, and other petrochemicals (Energywire, Sept. 18, 2014).

Public health researchers have indicated that the airborne chemicals that killed the workers also raise questions about whether the vapors pose a threat to people who live nearby. But they say there is little or no published research on the topic, and NIOSH researchers say their findings can be applied only to workplace hazards.

Click here and here for EPA’s letters to Marathon and Continental.