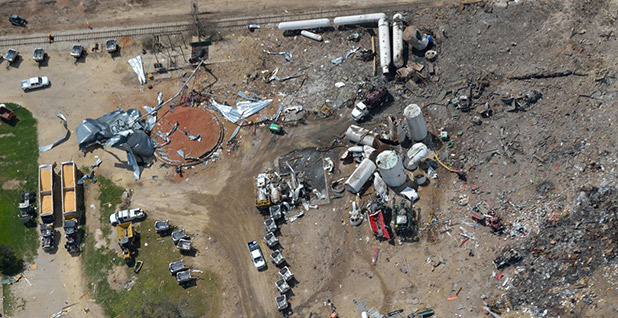 The location of so-called outlier chemical plants -- like the fertilizer plant in West, Texas, that exploded in 2013, killing 15 people -- remain a secret because of national security rules. Photo by Shane Torgerson, courtesy of Wikipedia.

U.S. EPA knows which chemical facilities aren’t following federal safety protocols, but it can’t tell the public where they are.

EPA identified between 13 and 15 potential violators in the wake of an explosion at an outlier plant in West, Texas, three years ago this month that killed 15 people. At least two outliers remain out of compliance.

But their identities remain a secret thanks to post-Sept. 11 regulations administered by a different agency, the Department of Homeland Security.

Unlike an earlier generation of environmental laws, including the Clean Air Act and Clean Water Act, programs launched under the umbrella of DHS were crafted largely without any sense of transparency in mind.

If EPA told the public the names of the 13 outlier plants, people who live near them might be prodded to take more precautions. Workers might think twice before taking a job there. Or community groups could protest at the plants and pressure them to listen to federal overseers.

"The disaster at West illustrates the level of harm that our communities can suffer when something at even a small facility holding hazardous chemicals goes wrong," Rep. Patrick Meehan (R-Pa.) said at a hearing of the House Homeland Security Committee’s Subcommittee on Cybersecurity, Infrastructure Protection and Security Technologies in 2013. "Whether the harm is intentional or the result is an accident, the effects are devastating. And that’s why it’s so important that these outliers are accounted for."

Compliance with EPA and DHS programs is crucial because under the risk management program, it triggers notification of local emergency planning committees, which then can train emergency responders and prepare for worst-case scenarios.

DHS keeps the information on servers at Oak Ridge National Laboratory and has "robust physical security and cybersecurity controls in place for securing this data," Brian de Vallance, DHS’ assistant secretary for legislative affairs, wrote in 2014.

The information, however, is available only to federal agencies — not to the public.

"The remaining two are currently under EPA review," the agency said in response to a Freedom of Information Act request about the outliers.

Mathy Stanislaus, EPA assistant administrator for land and emergency management, described the hunt for outliers as a joint process between the two agencies, but most of the work was done by DHS, the agency said after processing a FOIA request for nearly 15 months.

"The EPA is only able to share final, non-deliberative records that fall outside the FOIA exemptions based on information owned or developed by the EPA," the agency explained.

It’s just one example of the secrecy that keeps the identities of problem plants hidden — a luxury not afforded to gross violators of air, water and other traditional environmental laws.

For these programs, the public can search using free online tools to identify industrial facilities that emit hazardous chemicals into the air or water at levels exceeding permitted amounts.

The secrecy surrounding chemical plants makes it hard for the public to know what DHS is doing to protect them. DHS didn’t respond to multiple requests for comment on this story.

EPA said it could release only information that did not identify the facilities. In the two pages of correspondence the agency disclosed, an unidentified chemical facility tried to make the case that EPA was mistaken in its assessment of the quantity of chemicals it used and thus it did not have to participate in the risk management program.

For years, DHS officials have touted progress at the CFATS program, but it can be hard to verify whether that is true. In 2011, someone leaked documents to Fox News showing CFATS was woefully behind schedule, contradicting years of positive statements from the program’s leaders (Greenwire, Dec. 23, 2011).

Officials now say a long-term reauthorization of the program approved by Congress in 2014 has led to nearly all site security plans being authorized, as the program envisions.

"There’s no doubt that the DHS approach to restricting information really doesn’t serve a significant national security concern," said Ron White, formerly the director of regulatory affairs at the Center for Effective Government and now a senior fellow at the Union of Concerned Scientists, according to his LinkedIn page.

"It’s particularly important to be able to know which facilities no longer pose a significant risk concern, because I think those serve as great examples of what others in the industry can do," White added.

EPA has a variety of programs to draw attention to companies that have reformulated consumer products to remove more harmful substances, or plants that have come up with innovative ways to scrub air emissions and protect the climate.

But DHS’ commitment to keeping facility information secret means it can’t publicly pat plants on the back that no longer need its oversight.

For almost four years, the environmental group Greenpeace has sought a list of plants that have exited the CFATS program because they have modified their facilities to use safer chemicals. The group wants to highlight these facilities as examples the chemical industry should follow.

But its efforts have been stymied at nearly every turn.

The group maintains DHS should have no problem releasing the information because the plants are no longer in the CFATS program and pose no risk to the public.

It filed a FOIA request in 2012 seeking "all releasable documents and records that contain the most complete listing of chemical facilities that have reduced their holdings of threshold quantities of ‘chemicals of interest’ … rendering them no longer ‘high risk facilities’ under CFATS."

In addition, the group sought information on "any safer chemicals, processes or methods these same facilities adopted to no longer be classified as ‘high risk’ facilities under CFATS."

The group noted Rand Beers, then the undersecretary of the National Protection and Programs Directorate, had told a House committee that year that "more than 1,600 facilities completely removed their chemicals of interest, and more than 700 others" cut their quantities low enough to avoid regulation. This had "made the nation more secure," Beers said.

In 2014, an administrative law judge with the Coast Guard, which handles FOIA appeals for DHS, reversed the agency’s decision not to disclose more than 123 pages of records listing facility names. Timothy O’Connell, an attorney adviser at the Coast Guard, wrote the agency had withheld the information in a way that "is not in accordance with applicable case law."

The agency’s assertion that disclosing the records would harm people was too "overly broad" to qualify for the exemption claimed, O’Connell wrote.

Nearly two years later, Greenpeace has not received the requested information from DHS. Last year, O’Connell wrote the group noting that, while DHS "is obligated to comply … we have no ability to force compliance if an agency does not adequately obey our appellate decisions." The only further action, he explained, was to sue DHS in federal court.

Bill Allmond, the vice president for government relations at the Society of Chemical Manufacturers and Affiliates, didn’t oppose the release of the facilities’ names.

The concern is that if the names were released, circumstances could change and they could end up back in the CFATS program, which is supposed to be kept confidential because of security concerns, Allmond said.

CFATS oversight is triggered automatically based on what quantities of specified chemicals are used at a site.

Local communities may benefit from the knowledge that a site is no longer considered high-risk but don’t necessarily need to know how the plant achieved the risk reduction, Allmond said.

Greenpeace Legislative Director Rick Hind said that at first, the group simply wanted to obtain accurate statistical information to use in comments it planned to submit to DHS and EPA urging tougher chemical safety recommendations.

"We were rolling the dice assuming the best of them, and we got screwed," Hind said, "or we are getting screwed."