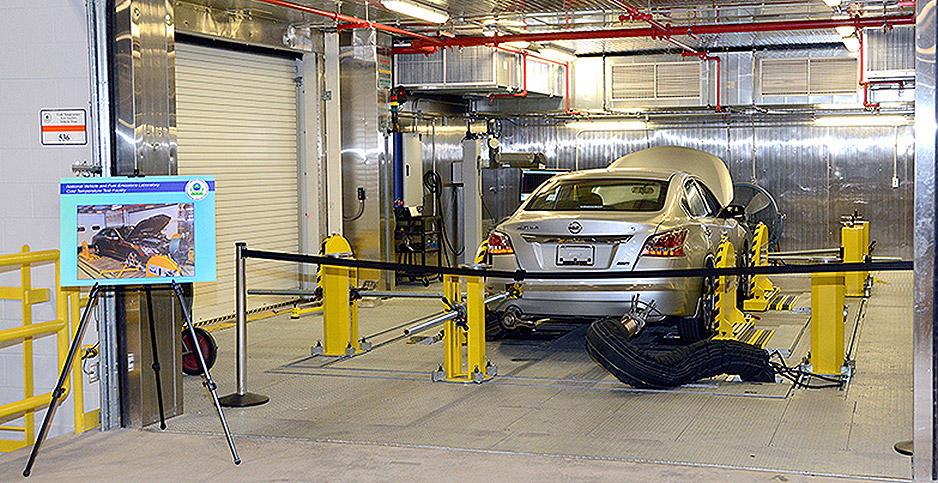 Auto emissions testing has stopped, a clean trucks rulemaking has been delayed, and enforcement cases potentially have been slowed as a key EPA vehicles laboratory remains closed due to the COVID-19 pandemic.

The National Vehicle and Fuel Emissions Laboratory in Ann Arbor, Mich., has been closed since late March, an EPA spokesperson confirmed in an email to E&E News.

The facility "was closed at the end of March consistent with public health plans in Southeast Michigan and has now begun a phased reopening process as part of EPA’s overall reopening strategy," the spokesperson said.

EPA Administrator Andrew Wheeler said in a July 31 email obtained by E&E News that the Ann Arbor office was moving to phase one of reopening (Greenwire, July 31).

The vehicles lab is a division of EPA’s Office of Transportation and Air Quality. It was established in 1971, shortly after President Nixon signed the executive order that created EPA.

For nearly 50 years, the lab has been responsible for testing vehicles and engines to certify that they meet the latest emissions and fuel economy standards.

The lab only has the resources to test about 20% to 25% of all new vehicles, relying on automakers to test the rest.

If a vehicle passes the test, EPA gives the car company a "certificate of conformity," which allows the company to legally sell the vehicle in the United States.

In addition, EPA provides a "Fuel Economy and Environment" label, which is affixed to the window of all new cars and trucks sold in the country.

Margo Oge, the former head of EPA’s transportation office, expressed concern that the lab’s closure could have a negative impact on consumers.

"As a consumer, when you buy a new car, you want to have some confidence that the labels are accurate," said Oge, who led the transportation office under the Obama and Clinton administrations.

"The question is, is EPA going to give [automakers] a certificate without any testing? That has never happened in the history of the agency," she added.

The EPA spokesperson denied that the lab’s closure would harm consumers, noting that employees have been able to remotely audit automakers’ testing of their own vehicles.

"The closure does not relax EPA requirements for vehicle and engine certification," the spokesperson said.

"While EPA’s audit testing at NVFEL has been temporarily stopped, EPA staff have continued their oversight of manufacturer compliance using other tools, including, for example, through remote audits of manufacturer conducted tests," the spokesperson added.

In addition to vehicle certification, the lab plays an important role in enforcement cases against vehicle and engine manufacturers, said Jeff Alson, a former senior engineer and policy adviser at the lab.

The Volkswagen AG emissions cheating scandal was a "wake-up call" for the lab, said Alson, who worked at the agency for 40 years before retiring in 2018.

The scandal began in 2014, when researchers with the International Council on Clean Transportation found that VW had cheated on emissions tests for 11 million diesel cars.

In particular, the researchers found the VW vehicles had nitrogen oxides (NOx) emissions that were 40 times higher in real-world driving conditions than in laboratory tests.

In 2015, EPA issued a notice of violation of the Clean Air Act to the German automaker, which ended up paying billions of dollars in fines to regulators in multiple countries.

"We learned a lot from the Volkswagen disaster. That was a bad thing for the environment, diesel owners and EPA," Alson said.

And late yesterday, Daimler AG announced that it had reached agreements in principle to settle claims over emissions from about 250,000 diesel cars and vans for over $2.2 million. The automaker said consent decrees would be filed in court in the coming weeks.

The EPA spokesperson pushed back on the idea that enforcement work had slowed during the lab’s closure, while declining to offer details.

"EPA enforcement and compliance personnel continue to work daily with the Office of Transportation and Air Quality to ensure robust oversight of vehicle and engine manufacturers and others subject to the Clean Air Act’s mobile source requirements. The agency employs a range of methods to identify and correct noncompliance," the spokesperson said.

The lab has also taken the lead on a high-profile rulemaking that has been plagued by delays.

The Cleaner Trucks Initiative is aimed at strengthening NOx emissions standards for heavy-duty trucks. NOx is a key ingredient in smog and acid rain. The standards have not been updated in 19 years, despite a provision in the Clean Air Act mandating periodic review.

In the Trump administration’s spring regulatory agenda, EPA had indicated plans to issue a proposed rule for the Cleaner Trucks Initiative in September.

But that timeline has since been delayed, sources told E&E News last month (Greenwire, July 16).

Oge, the former head of EPA’s transportation office, said it seems clear that the delay stemmed from the lab’s closure.

She expressed surprise and relief that the Trump administration hadn’t forged ahead with the proposed rule anyway.

"I’m surprised that the administration, which has done worse things, hasn’t just gone out with the proposal without any data, because that’s typical of what they have done," Oge said.

"I’m glad to hear my former colleagues convinced Mr. Wheeler that it would not be scientific," she added.

EPA now hopes to release the proposed rule for the Cleaner Trucks Initiative "in the first quarter of 2021," the EPA spokesperson said.