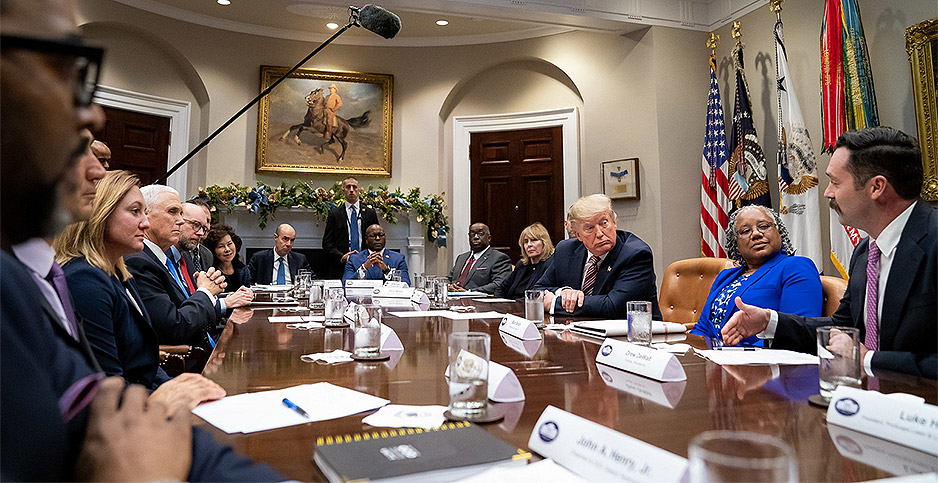 EPA imposed the most regulatory costs on the economy this year compared with agencies across the federal government, according to a White House report released late Friday.

That’s mostly because of the president’s efforts to scrap the Obama-era Clean Power Plan turning from a deregulatory action into a new rule.

EPA, largely because of the Affordable Clean Energy (ACE) rule, imposed $8.3 billion in regulatory costs on the economy, far more than its goal of $800 million in savings.

That finding is part of the White House’s fiscal 2019 rule-busting status update, which was released after President Trump hosted a roundtable with business leaders.

The report says the administration has cut regulatory costs by $13.5 billion in 2019. Savings since the beginning of the president’s term have totaled $50.9 billion, said the report.

Trump used the White House event to talk up his affinity for cutting red tape, and bashing government-mandated low-flow toilets and efficient lightbulbs, among other things.

The president asserted that he directed EPA to look at the standards, even though the Energy Department regulates energy-savings rules for household appliances.

In general, the report shows the administration fell short of some of the deregulation goals. It failed to cut costs by 25%, or $18 billion in savings, said analyst James Goodwin at the Center for Progressive Reform.

And it issued "significant deregulatory to regulatory actions" at a rate of 1.7 to 1. That’s shy of its goal of tossing out two rules for every new one.

Competitive Enterprise Institute’s policy vice president and senior fellow, Wayne Crews, in a blog post likened the shortfall to the expression "Close but no cigar."

That methodology has been debated in regulatory circles, with many scholars arguing that comparison is apples-to-oranges.

This year, regulatory analysts on both sides of the political aisle pointed out the administration’s shortcoming.

"We know the generation of new regulations has dropped significantly under Trump," Crews wrote in a blog post. "But in terms of rollbacks, we stressed early on that it would become harder to pick the ‘significant regulatory action’ fruit over time capable of generating rapid rule and cost rollbacks."

Still, he said, other presidents have not ventured to create deregulatory initiatives as ambitious as Trump’s.

Goodwin, however, argued the report lacked transparency on some front, giving the impression that the administration was trying to "cook the books."

Many rules, he said, were listed as "deregulatory" for the first time, unlike when they were published in the Federal Register. In addition, he said, it’s impossible to check their math.

"For the third time in a row, the report does not provide an itemized list of how individual rules contributed to the final results," he wrote, adding, "The irony is this report would be deemed inadmissible under the EPA’s pending ‘science in transparency’ rule for this reason."