EPA may let oil waste in waterways. Is the public at risk? 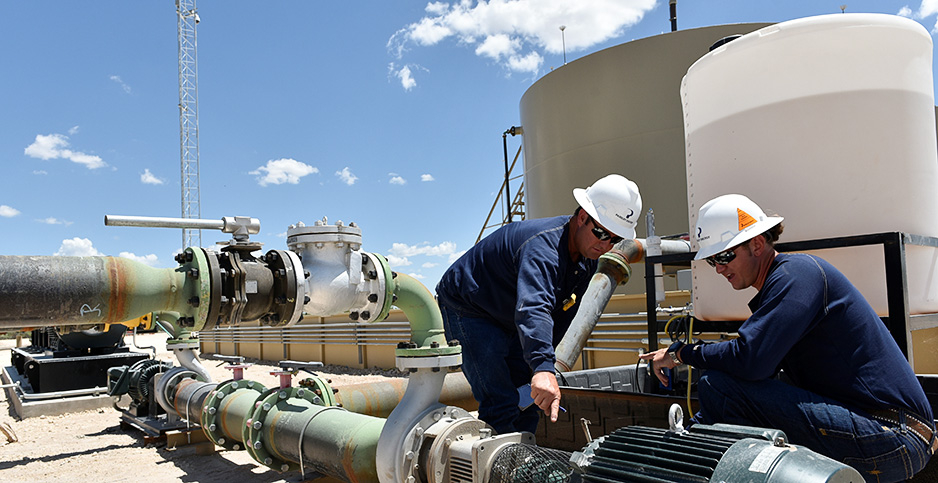 Within a year, Oklahoma could get approval from EPA to start issuing permits that will allow the oil industry to dispose of briny oil field waste in waterways, alarming environmentalists and making it the first of three Southwestern states to step into a thorny regulatory landscape closely watched by the industry.

If it catches on, the plan could help the oil industry cope with a growing waste disposal problem — one exacerbated by industry-linked earthquakes. And it could boost a multibillion-dollar industry that has grown up to manage oil field wastewater. But environmentalists are warning that the industry could wind up polluting waterways by releasing the treated water before it fully understands what’s in the fluid.

Once the wastewater is handed off to other users or allowed into surface water, "we can’t bring those discharges back," said Nichole Saunders, a senior attorney with the Environmental Defense Fund’s Climate and Energy Program.

Historically, the industry has disposed of wastewater, also known as produced water or salt water, in deep injection wells. Oklahoma, Texas and New Mexico are exploring the idea of allowing oil companies to recycle the fluid and either transfer it to other users or release it into surface water like streams and rivers.

Both sides agree it could happen quickly, although the regulations on releasing treated wastewater into surface water will likely vary from state to state. Oklahoma has already asked EPA for authority to issue permits for oil field waste disposal, and both Texas and New Mexico enacted laws this spring that require their environmental agencies to explore the idea.

"I don’t see it far off at all," said Bud Ground, director of regulatory affairs at the Oklahoma Petroleum Alliance.

So far, a few other states have allowed disposal of oil and gas wastewater into rivers and streams, but it’s been limited. The changes that are happening in Oklahoma, Texas and New Mexico could bring the practice into the heart of the nation’s oil-producing region.

To get an idea of how much wastewater the oil industry produces, look at the reservoir in New York City’s Central Park. The artificial lake — 40 feet deep and surrounded by a 1.6-mile running track — holds about a billion gallons.

Oklahoma and New Mexico, the two other states that are considering regulatory changes, also produce billions of barrels of waste each year.

Wastewater disposal is a problem as old as the oil business — almost every oil well produces some briny water along with crude. It can have as much as six times more salt than seawater and can also be contaminated by crude oil, drilling chemicals and radioactive material or other minerals from the formation.

Spills and other mishaps with produced water have happened throughout the oil patch. Environmentalists and landowners say the salty waste is often harder to clean up than spilled oil, and it can sterilize the soil for years after a spill.

The fracking boom of the last decade has compounded the need for disposal.

Fracking itself — the process of breaking up rock formations with water and chemicals — has created a stream of wastewater that has to be disposed of or recycled. And fracking has pushed the industry into rock formations that have a lot of naturally occurring water trapped along with the oil and gas.

Experts have begun seeing signs that the industry is gradually running out of space to dispose of wastewater in the deep aquifers it has historically used.

The glut of produced water contributed to a string of earthquakes in Oklahoma from 2010 to 2014, which began to decline when state regulators limited the amount of wastewater injection in some parts of the state.

In Texas, researchers also have reported seeing earthquakes, though on a smaller scale than Oklahoma, and they’ve also reported rising underground pressure in the saline aquifers used to dispose of the waste. That could push up the cost of injecting the waste in the short term and start to limit the amount of fluid the formations can handle in the long term (Energywire, Dec. 20, 2018).

Neither of those trends is a crisis yet, but industry trade groups and state regulators started looking for alternatives a couple of years ago, Oklahoma’s Ground said.

"We just really want to be able to get ahead of it," he said.

Environmentalists say the industry and regulators will need to fill some large gaps in their knowledge before they can begin safely transferring water out of the oil field.

The industry has faced tough questions for years about the chemicals it uses in fracking fluid. Most of the information has become public knowledge since 2012, when a voluntary disclosure program known as FracFocus was started.

But some of the chemicals used in fracking are still listed as trade secrets (Energywire, Dec. 22, 2015).

And there’s even less known about the makeup of the naturally occurring brine that makes up the bulk of the waste stream. Produced water from oil fields is exempt from the federal law that governs most hazardous waste, known as the Resource Conservation and Recovery Act (RCRA).

Normally, industries that handle hazardous waste have to spend years determining its potential danger. That hasn’t happened with oil field waste because of the RCRA exemption, and the industry has felt little need to do independent research because most produced water was simply injected into disposal wells, EDF’s Saunders said.

The move to use treated wastewater outside the oil field creates a couple of problems. To discharge the treated waste into surface water, companies will need to get a permit under the Clean Water Act’s National Pollutant Discharge Elimination System (NPDES).

Those permits require detailed information about what’s in the wastewater and how it will affect the environment. But the historical RCRA exemption means there’s little existing research on the contaminants in produced water.

And the Clean Water Act doesn’t cover transfers of treated wastewater to other users, leaving a regulatory gap.

"There are few if any regulatory programs for treatment and use of produced water for these other purposes," Saunders said. "Where they do exist, they are very old."

There’s another crucial distinction. Most industrial wastewater comes from a single source, like a steel mill. In a case like that, the owner knows what’s in the waste stream, and it’s only treating waste from one site.

"We’re talking about a very, very complex waste stream that changes from well to well, region to region, day to day," Saunders said.

The Groundwater Protection Council, a consortium of state regulators that generally favors oil and gas development, has also stressed that more information is needed before produced water can be released into fresh water.

Any research will have to be done on a location-by-location basis, with the goal of matching the quality of the treated wastewater to the end users, like livestock growers or electric plants that need water for cooling, said Mike Paque, executive director of the groundwater council.

"Making the water fit health-wise, environment-wise is where the research needs to be done," he said.

Ground, with the Oklahoma Petroleum Alliance, said the environmental concerns are manageable. A lot of industries already discharge treated wastewater into rivers and streams — not to mention virtually all of the municipal sewage in the country. And there’s a limited amount of produced water being treated and released into rivers in gas-producing states like Pennsylvania and Colorado.

A key goal for the industry is for states to take over Clean Water Act permitting from EPA, a process known as delegation. That would allow them to issue permits more quickly and allow companies to apply to a single agency for wastewater and other types of permits.

Oklahoma’s Department of Environmental Quality applied for that authority earlier this year and is responding to questions EPA raised, including whether the state wanted to take over authority for handling other types of oil field wastewater, such as the fluid left over after pipelines are hydrostatically tested, Erin Hatfield, a spokeswoman for the state agency, said in an email.

In Texas, regulators at the state Commission on Environmental Quality are watching Oklahoma’s progress. The Texas Legislature enacted a law this spring requiring TCEQ to ask EPA for delegation authority by 2021.

The state agency already has authority from EPA to issue discharge permits for hydrostatic testing waste, state officials said at a September meeting to discuss the new law.

New Mexico regulators are taking a more cautious approach. As in Texas, the New Mexico Legislature enacted a law aimed at making it easier to dispose of produced water outside the industry.

Texas and Oklahoma already have authority from EPA to issue NPDES permits for other types of wastewater, like city sewer plants. New Mexico doesn’t have that authority, so it lacks the experience that its neighboring states have — another reason to proceed slowly, said Rebecca Roose, director of the New Mexico Environment Department’s water protection division.

The state is holding a series of meetings on produced water reuse, but Roose and other officials have stressed that they want to move carefully, particularly when it comes to discharging treated waste into streams and rivers.

"If we aren’t cautious, we could end up putting our limited and highly valuable surface water resources at risk," Roose said.

The slow decline in injection capacity, coupled with the need to preserve fresh water in thirsty regions like West Texas and New Mexico, has already pushed some players to recycle wastewater and reuse it for fracking and other oil field operations. Unlike discharges in fresh water, the reuse process doesn’t require EPA-approved permits.

Trade groups, including the Texas Alliance of Energy Producers and the Groundwater Protection Council, are promoting the idea of reusing treated wastewater outside the oil industry, although the groups caution that a lot more research is needed before that happens.

As of last year, about 30 treatment plants were operating in Oklahoma to prepare produced water for reuse in the oil field. In New Mexico, about 8% to 10% of oil field wastewater is being recycled, according to the state Oil Conservation Division, and a similar amount is being recycled on the Texas side of the Permian Basin, according to the Texas Alliance of Energy Producers.

The trend has spawned a new industry that hauls away oil field wastewater, with dozens of companies and revenue growing into billions of dollars, said Matt Gabriel, chief executive officer of XRI in Midland, Texas.

XRI and its peers are poised to grow as states begin to limit the amount of injection they allow. Already in Texas, regulators at the state Railroad Commission are limiting the amount of fluid that new disposal wells can inject as a way to cope with the increase in earthquakes, said John Durand, XRI’s president.

XRI is trying to stake out a new position. Instead of simply injecting its customers’ wastewater into disposal wells, the company is using a 300-mile network of pipes to move the fluid to one of seven terminals, where it treats the water and recycles it back to the oil companies.

The company recently acquired Fountain Quail, a 20-year-old company that specializes in recycling and treatment equipment.

In the long run, XRI and other companies are looking for ways to promote "beneficial reuse" — transferring the treated wastewater to other users like farmers and ranchers, or other industry like power plants that need water for cooling, Durand said. Disposing of the treated wastewater in rivers and streams could be one of those solutions, but it won’t likely happen for several years.

"Our business is very much focused on treatment and recycling and reducing the industry’s reliance on fresh water and disposal wells," he said. "Beneficial reuse is something that is a long-term goal, but that will take time along with regulatory approvals and advancements in technology."

Correction: A previous version of this story misspelled the name of Nichole Saunders of the Environmental Defense Fund’s Climate and Energy Program.