EPA may roll back methane rules. Will states fill the gap? 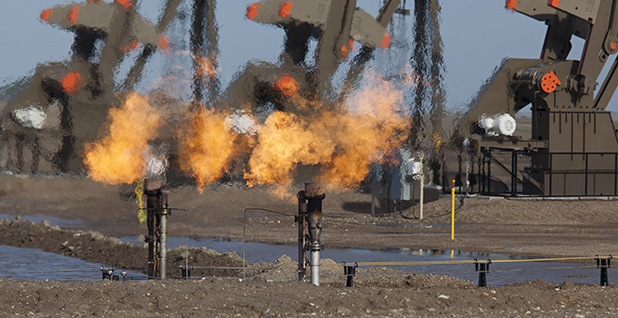 But two of the biggest oil- and gas-producing states, Texas and North Dakota, don’t have rules on methane emissions. About half of U.S. oil comes from those two states, and Texas alone produces a fourth of the nation’s gas. And the oil companies haven’t always lived up to their promises.

The regulatory outcome is significant because methane, the main ingredient in natural gas, traps far more heat than carbon dioxide when it’s released in the atmosphere, and it’s responsible for as much as a fourth of human-caused global warming. Last year, the Intergovernmental Panel on Climate Change said that methane might have to be reduced 35% below 2010 levels by midcentury to hold temperature rise at 1.5 degrees Celsius.

"If companies aren’t being held accountable through a regulatory structure that’s comprehensive and evenly applied, then we don’t have the guarantees of the reductions that we need to make a difference for the climate," said Dan Grossman, senior director of regulatory affairs at the Environmental Defense Fund who has helped states write methane regulations.

The Independent Petroleum Association of America, which has urged EPA to roll back its methane standards, argues that the Clean Air Act’s requirements for New Source Performance Standards were intended to provide a "floor" for pollution levels. The states each have their own legal framework, but it’s better than having a one-size-fits-all requirement from the federal government, said Lee Fuller, the group’s executive vice president.

"The fear was states would become pollution havens of some kind if there wasn’t such a floor. But we’ve passed that a long time ago," Fuller said.

Pennsylvania, the second-biggest gas-producing state in the country, has a permit system that’s intended to limit emissions from new wells, and it’s working on emissions regulations for the thousands of existing wells in the state (Energywire, Dec. 11, 2018).

There’s been opposition to many of the state rules.

In Pennsylvania, for example, the trade group Marcellus Shale Coalition disliked the state’s methane-reduction plan and questioned its legality even after two years of negotiations.

"We remain concerned about imposing additional requirements … particularly those that exceed DEP’s statutory authority," the trade group’s president, David Spigelmyer, said in a statement last year when the rules were finalized.

In New Mexico, the oil industry initially opposed Lujan Grisham’s methane plan but has become more comfortable that the state agencies are willing to listen to producers and write a rule that doesn’t curtail their output.

But in large energy states like Texas without regulations, companies have been allowed to flare large amounts of natural gas because it’s not economic for companies to pipe it to markets.

Flaring gas can release a range of pollutants because of impurities in the gas. The flares can also release raw methane if they don’t ignite correctly or if they don’t fully combust the gas.

And while major oil companies like Exxon Mobil Corp. and Royal Dutch Shell PLC have pledged to cut their emissions, their performance hasn’t always matched their goals.

Exxon’s XTO subsidiary wasted about 4.5% of its gas production in 2018, down from about 9% in 2016, the EDF analysis shows. Shell’s flaring rose from 4% of production to 5% of production during the same period.

The data in Texas shows that some companies are making progress on reducing flaring, EDF’s Colin Leyden said in a blog post.

"It also shows us that other companies will exploit the dearth of rules around flaring until they’re forced to comply," he wrote. "We can’t simply count on the actions of a few responsible companies to clean up unnecessary pollution in the Permian."