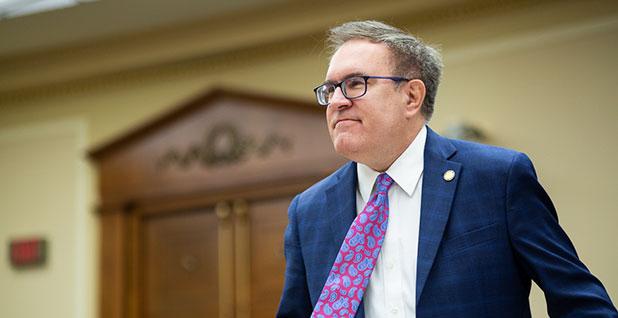 EPA Administrator Andrew Wheeler is pictured on Capitol Hill in September. The agency was supposed to have issued the first-ever carbon dioxide standard for planes last month. Francis Chung/E&E News

The Trump EPA was supposed to have issued the first-ever U.S. carbon dioxide emissions rules for airplanes last month.

The agency blew past its self-imposed deadline of Sept. 30, raising questions about the status of the standards and sowing concern among environmentalists.

"A proposed rule was scheduled to be released this fall, but we have not seen anything to date," said Clare Lakewood, a senior attorney at the Center for Biological Diversity.

"When the EPA finally gets around to releasing its standards, we really hope they will be stringent, technology-forcing standards that we really need to address the growing problem of aircraft pollution," Lakewood added.

EPA first laid out the September timeline for the aircraft carbon standards in the Trump administration’s spring regulatory agenda.

Asked for comment, EPA spokeswoman Maggie Sauerhage said in an email yesterday, "There are no updates at this time." Sauerhage didn’t respond to follow-up questions about why the standards were delayed or when they’re now expected to be released.

The saga over the standards dates back to 2010, when environmentalists sued the Obama EPA over its alleged failure to address greenhouse gas emissions from mobile sources.

In 2011, the U.S. District Court for the District of Columbia ruled that EPA had to decide whether greenhouse gas emissions from aircraft endanger public health and welfare, and, if so, develop new regulations.

In 2014, environmental groups filed a notice of intent to sue, alleging that EPA had failed to start evaluating the climate risk of airplane pollution as mandated by the court.

Now, the matter has taken on a newfound urgency as an international regulator cracks down on pollution from planes.

The International Civil Aviation Organization, a specialized body of the United Nations, has asked member countries to begin crafting carbon dioxide standards for new aircraft by 2028, when its own rules will take effect.

Still, environmentalists view the ICAO standards as too weak. While they would require emission reductions of 4% over 12 years, market forces alone are projected to achieve reductions of around 10%.

"The ICAO standards are far too weak," Lakewood said. "They’re basically an anti-backsliding provision. Most aircraft in the U.S. already meet that standard."

Dan Rutherford, program director for marine and aviation at the International Council on Clean Transportation, said the aviation sector should consider following the model of the shipping sector.

"International shipping has seen a surge in commitments to zero emission shipping technologies since [the International Maritime Organization] adopted a 2050 climate target last year," Rutherford said. "If it wants to continue to grow, the aviation industry needs to make a similar commitment through ICAO."

EPA’s delay on the emission standards comes as ICAO members are meeting in Montreal this week.

The meeting was slated to start last Friday, but it was pushed back due to the Montreal’s climate march, which drew hundreds of thousands of young people and featured remarks by Swedish activist Greta Thunberg. The march went directly past the building where the ICAO meeting occurred.

"Just landed in Montreal and it seems that ICAO’s climate talks have been postponed due to a Fridays for the Future march, ironically," Rutherford told E&E News in an email at the time.

ICAO offered support for the protesters on its Twitter feed.

"Hundreds of thousands of people have peacefully and successfully demanded urgent #climateaction here. We have never been more proud of to be hosted in @Montreal, a true #UnitedNations city," the organization tweeted.

The emissions standards are not on ICAO’s agenda this week, as they’re under the purview of individual countries, said Brad Schallert, who is attending the meeting in his capacity as deputy director of international climate cooperation with the World Wildlife Fund.

Instead, the international body will focus on developing a "long-term aspirational goal" for international aviation, clarifying the mechanisms through which airlines can purchase carbon offsets and crafting new guidelines on supersonic flights, Schallert said.

The discussion on supersonic flights will likely draw scrutiny from environmentalists, who oppose the super-fast aircraft on the grounds that they release significantly more pollution (Climatewire, Jan. 30).

The environmental portion of the meeting is expected to conclude tomorrow.