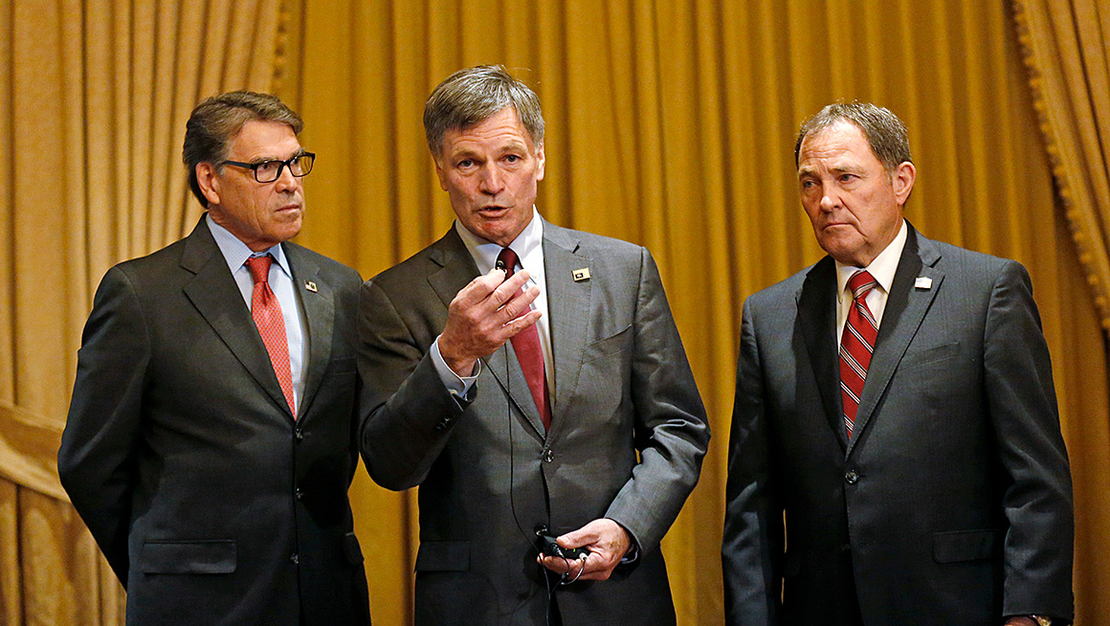 After months of trading barbs, EPA and Wyoming officials say they’ve had a breakthrough in talks over the future of one of America’s largest coal plants.

The reversal comes after a meeting between EPA Administrator Michael Regan and Wyoming Gov. Mark Gordon (R) in Washington, D.C., late last month that could lead to a fuel switch at the Jim Bridger power plant from coal to natural gas.

EPA has said it intends to reject Wyoming’s plan to limit haze-forming emissions at the facility because it does not comply with the Clean Air Act. One of the plant’s four generating units could close as soon as April if the emerging agreement collapses.

The stakes are enormous. The coal plant is one of the largest polluters in the nation, with average annual carbon dioxide emissions equivalent to those from 2.6 million cars. But the plant is also an engine of Wyoming’s economy. More than 500 people work there and at a coal mine servicing it. Electricity generated at Jim Bridger is shipped across the West to customers in Idaho, Oregon, Utah and Washington.

The potential deal over its future, which hasn’t previously been reported, marks a sudden reversal in talks between Wyoming and EPA officials. Gordon had accused EPA of trying to close the plant to help achieve the Biden administration’s climate goal of halving U.S. greenhouse gas emissions by 2030. The agency denies that assertion.

The details of the emerging deal are still being negotiated, but the most likely option appears to include converting two of the plant’s coal units to natural gas. PacifiCorp, Jim Bridger’s operator and majority owner, proposed making those changes.

“Everything is on the table, including the conversion to gas,” said Randall Luthi, Gordon’s energy adviser.

He described the governor’s meeting with Regan as positive, saying, “The governor very much enjoyed meeting Administrator Regan face to face. They covered a wide range of topics about the importance of state primacy and the ability to work with EPA. We believe progress is being made on the Jim Bridger issue.”

The meeting came on the sidelines of the National Governors Association meetings in Washington during the last week of January.

Lindsay Hamilton, an EPA spokesperson, described the conversation as “friendly and productive,” adding, “They discussed a potential path forward for the Jim Bridger plant and federal support for Wyoming communities, among other topics.”
The root of the dispute between EPA and Wyoming can be traced to the Regional Haze Rule, a provision of the Clean Air Act that directs states to improve visibility and air quality in and around national parks and wilderness areas.

Jim Bridger is one of the country’s largest emitters of nitrogen oxides (NOx), haze-forming pollutants. Only 16 power plants in America have emitted more over the last decade, according to an E&E News review of EPA data.

In 2014, EPA approved Wyoming’s plan to install pollution controls on all four of Jim Bridger’s units to slash NOx emissions. Since then, PacifiCorp has installed controls on just two of the plant’s units. The other two have not been upgraded.

Wyoming proposed updating the plan in 2020 by reducing electricity generation at the two units without pollution controls. The proposal was never acted upon by the Trump administration, though Wyoming officials say they received notification that EPA’s Region 8 office in Denver was prepared to approve it.

Then President Biden was elected, and EPA officials told the state last summer that Wyoming’s plan did not comply with the Clean Air Act.

The issue quickly became political. In a series of letters to Regan last year, Gordon warned him that the state was prepared to sue EPA for failing to act on the issue and alleged that PacifiCorp’s plan to convert the two units to gas “was prompted by EPA’s desire to cease burning coal at all costs.”

Sen. Cynthia Lummis, a Wyoming Republican, soon joined in and placed a hold on the nomination of EPA’s director of enforcement.

‘Positive’ for the climate?

EPA, for its part, says it has sought to engage with state officials and offered to work with Gordon to find a solution to the plant’s air pollution issues, outlined in Wyoming’s state implementation plan, or SIP. The agency says it was rebuffed by the governor’s office.

“EPA conveyed to Wyoming our very substantial concerns with the state’s SIP revision on June 11, 2021,” Hamilton said. “At that time, EPA staff also conveyed the agency’s strong interest and willingness to work with Wyoming and PacifiCorp on possible paths forward to meet the requirements of the Clean Air Act and the Regional Haze Program.”

PacifiCorp is now running up against a deadline to comply with its 2014 plan, which gave the company until 2021 to install controls on one of Jim Bridger’s units and until the end of 2022 for the other. Gordon extended the 2021 deadline until April to let the unit continue to operate.

In a statement, the Portland, Ore.-based power company said it continues to work toward an agreement with EPA and the state. The company still plans to convert two coal-fired units to natural gas. A pipeline would need to be built to the plant, meaning that the earliest a conversion could occur is at the end of 2023.

A conversion to natural gas would represent a compromise by both sides. Wyoming gas production, which has flagged in recent years amid surging national production, would benefit from securing a large new customer. Switching to gas is also likely to satisfy Regional Haze Rule requirements, analysts said. Gas plants tend to emit significantly less NOx than those fueled by coal.

“From an emissions perspective, I think it is positive,” she said.

Jim Bridger’s air quality permit would need to be amended to reflect the conversion to gas, a move spelled out in a long-term strategy document known as an integrated resource plan, or IRP, said Shannon Anderson, a lawyer at the Powder River Basin Resource Council, a Wyoming-based conservation group.

“PacifiCorp is trying to match its business plan and IRP with its permit obligations under the Clean Air Act. Right now, they are not matched,” she said. “They need to make that happen.”

Anderson said she could not comment on the gas conversion plan without seeing the potential deal. But, she added, “if this is the deal, it could have been reached six months ago.”