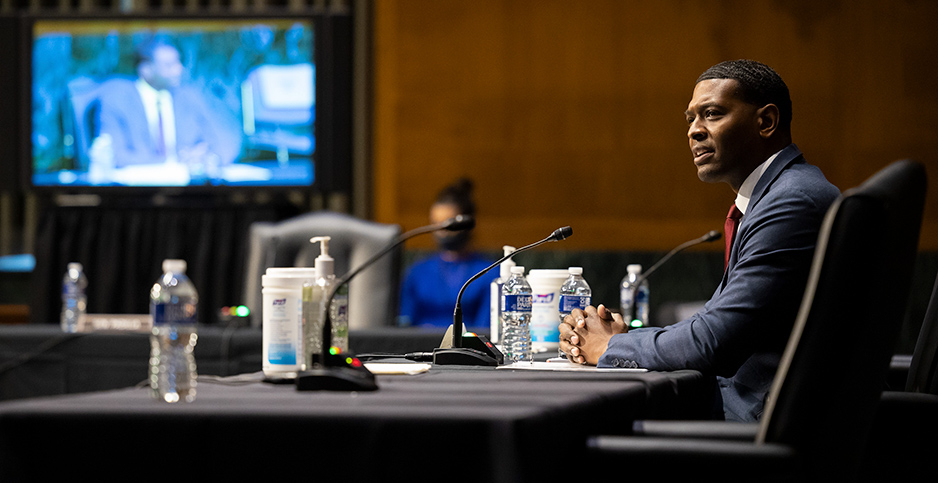 EPA administrator nominee Michael Regan yesterday appeared to somewhat ease Republican anxiety over the fate of President Trump’s controversial rule that rolled back federal protections for streams and wetlands by vowing to listen to farmers at the center of the fight.

Citing his experience at North Carolina’s Department of Environmental Quality, which he has led since 2017, Regan told the Senate Environment and Public Works Committee during his confirmation hearing that he has had to respond to both the Obama-era Clean Water Rule released in 2015 and the Trump administration’s replacement Navigable Waters Protection Rule, which took effect in June.

The Biden administration has already moved away from defending Trump’s rule in court and has said it will review the regulation (E&E News PM, Feb. 1).

Regan said that, if confirmed, he plans to hear from all stakeholders to ensure any final "Waters of the U.S.," or WOTUS, regulation is clear and understandable, not overly burdensome. But he also took a shot at the current Trump regulation and its effect on vulnerable wetlands like North Carolina’s bays, small depression wetlands that were left unprotected under the most recent Trump revisions.

"What I saw with the 2019 rule was a rollback that went even further back than presidents of both of our parties," Regan told Sen. John Boozman of Arkansas, the ranking Republican on the Senate Agriculture, Nutrition and Forestry Committee.

"What I’m hopeful for is that we don’t have to go with the slingshot approach, that we can look for a common ground where we give the farming community and the environmental community some certainty that as we move forward that we’re going to follow the science, follow the law, look at a pragmatic approach that doesn’t overburden the farmer," Regan continued. "But we don’t have to sacrifice precious wetlands in North Carolina like our Carolina bays and the others."

Any potential federal regulation that would protect Carolina bays would likely come under similar fire as the Obama-era Clean Water Rule, which conservatives and industry slammed for its treatment of isolated wetlands. That regulation would have allowed EPA and the Army Corps of Engineers to protect isolated wetlands like Carolina bays by considering whether all such isolated wetlands in a particular watershed had a biological, chemical or hydrologic connection to the nearest waterway. By contrast, any wetlands without surface water connections would be unregulated by the Trump administration. They are also not regulated under North Carolina state law, meaning they are completely unprotected in the current regulatory scheme.

Regan has so far toed a delicate line, recently slapping a nearly $90,000 fine on a polluting hog farm in North Carolina, while continuing to hold on to the goodwill of the industry behind the problem (Greenwire, Dec. 22, 2020).

In introducing Regan to the committee, Republican Sen. Richard Burr of North Carolina said the nominee has done a good job building a partnership with rural communities that’s constructive and not adversarial. Burr also noted that more than 20 agricultural groups support Regan’s nomination.

Boozman likewise applauded Regan’s collaborative reputation while pushing for more details about the fate of WOTUS.

Regan at the confirmation hearing repeatedly said that it’s difficult for any federal regulation to address the unique needs of the nation’s agriculture regions, and that he ultimately wants a rule that gives states the flexibility to protect water quality and local agricultural economies.

Boozman pushed Regan for details on what he sees as the definition of which waters should obtain federal protection, but the nominee said he’s going to have an "open door policy" to hear about administrative burdens the agriculture community suffered under "definitions they didn’t understand."

Regan also said he doesn’t believe small farmers are "looking for a shortcut" or "don’t want to protect water quality." He and Boozman agreed there are not sufficient resources to educate farmers on how to implement the rule, and the senator said he could potentially help with resources moving forward.

Sen. Joni Ernst (R-Iowa), who is floating a resolution in the upper chamber to keep Trump’s rule intact, urged Regan to move forward cautiously and reiterated that Trump’s rule enjoys broad support among farmers and ranchers.

"What we don’t want to do is exacerbate the problem further," said Ernst.