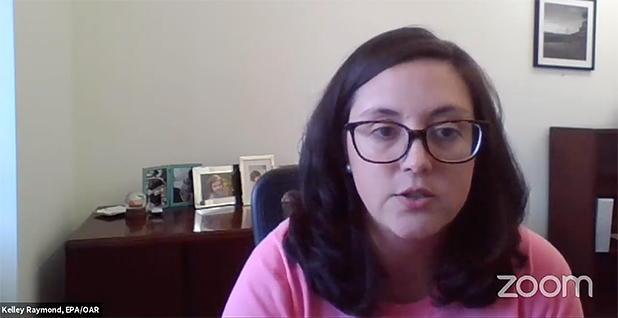 Kelley Raymond, a senior adviser in EPA's air office, speaking yesterday via Zoom at a Science Advisory Board meeting. uvideoonline/YouTube

When EPA embarked on an overhaul of its regulatory cost-benefit forecasting requirements in 2018, a trade group for heating and cooling equipment makers was happy to offer four pages of written comments and suggestions.

Two years later, the group’s then-top lobbyist is now at EPA, where she’s helping to shepherd the first installment of that overhaul to fruition.

During a virtual public meeting yesterday, she took a lead role in walking an agency advisory panel through the draft rule to require cost-benefit analyses for all significant Clean Air Act proposals in the future.

Given that EPA routinely faces court challenges to major air regulations, "the public might have a lack of beliefs that we are doing these rules in the right way," Raymond told members of the Science Advisory Board who are reviewing the draft rule’s scientific and technical basis. Accordingly, she said, EPA wants to provide a "feeling of trust in the agency and the consistency and transparency in which we are promulgating" those regulations.

Environmental and public health groups view the draft rule as a ploy designed to make it harder for EPA to pursue new air quality safeguards. Industry organizations, by contrast, are largely supportive. When EPA launched the overhaul in 2018 by collecting feedback through an advance notice of proposed rulemaking, comments from an air conditioning institute attorney included recommendations on state implementation of national air quality air standards and other programs that fall squarely within the air office’s bailiwick.

It’s unclear whether any of the group’s concerns influenced the draft of the Clean Air Act cost-benefit rule. In a brief phone conversation yesterday evening, Raymond declined to elaborate on her role in advancing the proposal. Neither she nor EPA press aides directly responded to more than a half-dozen written questions sent later seeking more information.

"All EPA employees follow the direction of senior EPA career ethics officials," spokesman James Hewitt said in an email this morning. "Kelley has gone above and beyond federal ethics requirements."

Hewitt offered no specifics. EPA has not yet responded to a records request submitted almost two months ago by E&E News seeking counseling or other advice from agency ethics officials to Raymond.

But under the Trump administration, Raymond is only the latest EPA official to troop from the ranks of industries regulated by EPA into the agency itself.

"It sounds like an ethical conflict of interest, but it may not be violation of any ethical rules or statute," Craig Holman, government affairs lobbyist for Public Citizen, a left-leaning advocacy group, said in an interview this morning.

Even so, Holman said, under the Obama administration, Raymond could not have joined EPA because she had lobbied the agency while at the air conditioning institute.

"This is the revolving door at its worst," Holman said.

Other past and present EPA officials who have made similar moves include Administrator Andrew Wheeler, previously a contract lobbyist for the nation’s largest privately held coal company, and former air chief Bill Wehrum, a onetime industry lawyer who abruptly quit the agency last summer amid allegations that he had improperly intervened in a regulatory issue involving a client of his former firm.

Wheeler had unveiled the Clean Air Act cost-benefit proposal in early June; a document in the online regulatory docket shows that Raymond soon after had a call with Steve Lomax, environmental regulatory affairs director at Koch Companies Public Sector LLC, to answer "clarifying questions." Neither Raymond nor Lomax responded to written questions asking for more information about that call.

At the air-conditioning institute, spokesman Francis Dietz said officials there have had no contact "in any capacity" with Raymond since she left the organization last fall.

The group has not commented on the draft Clean Air Act rule published in June. Lobbying and work calendar records flagged by Accountable.US, which describes itself as a nonpartisan watchdog group, show that she had been repeatedly in contact with Ed Krenik, a senior principal and lobbyist with Bracewell LLP, whose clients include the air conditioning institute. In a phone interview, Krenik, declined to say what those meetings involved but said they had nothing do with the cost-benefit proposal or the institute.

Wheeler has described the proposed Clean Air Act rule as the first step in a long-term overhaul of the agency’s approach to cost-benefit analysis that will eventually be extended to future water, solid waste and toxics regulations.

Among environmental groups, the plan has sparked particular unease because of Wheeler’s assertion that it would bar the use of co-benefits as the "express rationale" for a major new air rule (E&E News PM, June 4). But the draft rule does not explicitly say that.

In response to a question at yesterday’s Science Advisory Board meeting, Raymond said that EPA could continue to account both for expected health benefits from reductions in pollutants directly targeted by a planned rule as well as the co-benefits stemming from cuts in other pollutants.

"I think there was a concern that the rule says more than it does," she said.

An SAB "work group" will now prepare a draft report on the proposed rule. The full panel plans to review it at a follow-up virtual meeting next month.

According to the board chairman, Michael Honeycutt, the final report should be out soon after, or well before EPA’s current deadline for finalizing the cost-benefit proposal in November.