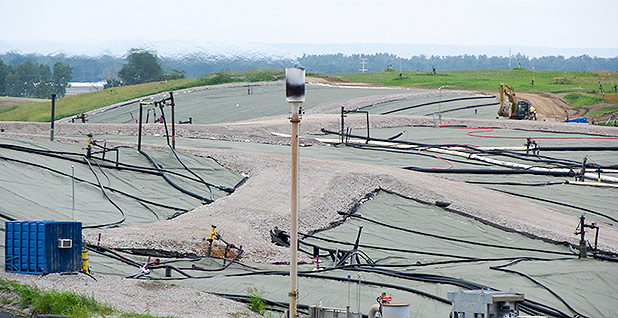 Acting EPA Administrator Andrew Wheeler this morning signed off on a long-delayed cleanup plan for a Missouri landfill contaminated with toxic waste from the Manhattan Project.

The 306-page record of decision calls for removing about 75,000 cubic yards of radioactive material from the West Lake Superfund site in Bridgeton, Mo., over the course of three years. The landfill will then be topped with an engineered cover that should eliminate harmful radiation from the remaining waste.

"Today’s decision not only reflects our commitment to the people of Bridgeton and Missouri, but it also reflects our larger commitment to the nation to expedite the remediation of Superfund sites across the country," Wheeler said during a brief signing ceremony at EPA headquarters. "We owe it to the American people to get these sites cleaned up as quickly and as safely as possible. And we are making tremendous progress in that regard."

The total price tag for the cleanup, which has been on EPA’s National Priorities List of Superfund sites since 1990, is now estimated to be around $205 million. That’s about $30 million less than the initial plan EPA floated earlier this year (E&E News PM, Feb. 1).

The savings, which would also expedite the project, are mainly due to a tweak the agency made that will allow for more variation in the depth of World War II-era radioactive waste that’s removed from the landfill.

The draft plan called for digging down 12 feet. But the final decision allows cleanup crews to excavate material between 8 and 20 feet deep, with the depth determined by the varying level of contamination across the 200-acre dump.

"The improvements we’ve made to the proposed plan will reduce exposure to the community and cleanup workers," Wheeler said at the event. He was joined by two Missouri Republicans, Sen. Roy Blunt and Rep. Ann Wagner; the latter is currently locked in a tight re-election race with a 29-year-old Democratic attorney.

Some of the groups responsible for funding the cleanup had advocated for a cheaper cleanup plan that would have kept the radioactive material in place and topped it with a containment cap. That option was fiercely opposed by community organizations, which celebrated today’s decision.

"WE DID IT GUYS. … NO CAP!!! ITS REMOVAL!!!" Karen Nickel, a co-founder of the group Just Moms STL, wrote on Facebook last night when the news was first reported by the St. Louis Post-Dispatch. "THIS IS A HUGE VICTORY FOR THIS COMMUNITY!"

Landfill owner Republic Services Inc., which along with utility Exelon Corp. and the Department of Energy are responsible for footing the cleanup bill, is less excited about the decision.

In a statement, the subsidiary of Republic that oversees the Superfund site called the order "arbitrary and capricious."

The firm said it is "opposed to the selected excavation because it creates unacceptable risk with no proportional benefit." It added that its preferred option, to "cap and monitor" the waste, wouldn’t have risked exposing workers and community members to waste as it is excavated and moved elsewhere.

The West Lake site is one of the first 21 sites former EPA Administrator Scott Pruitt targeted for "immediate and intense action" as part of his revamp of the Superfund program (E&E News PM, Dec. 8, 2017).

While Pruitt, who left the agency in July under a crush of ethics investigations, went unmentioned by Wheeler, Blunt gave him some credit for focusing the agency’s attention on West Lake.

"I do remember my first discussion with Administrator Pruitt, this was a top-of-the-line issue," the Missouri senator said. "And I also remember him saying, ‘How can anything be a national priority for 28 years and not be done?’"

Blunt said he had the same conversation with Wheeler, and "fortunately, he felt the same way."