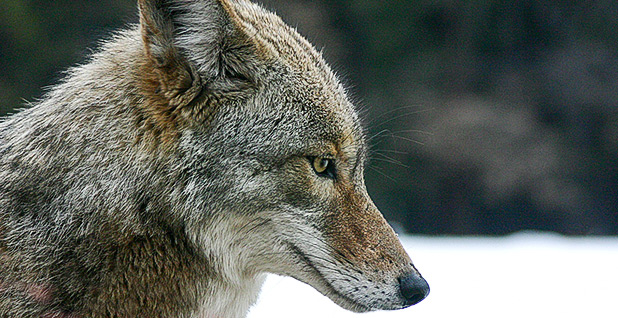 "Cyanide bombs" have been used to kill predators like coyotes. Christopher Bruno/Wikipedia

EPA today announced it will allow the Agriculture Department to continue using cyanide devices to kill predator animals, though the agency set new requirements designed to reduce risks to people, pets and other "non-target animals."

EPA’s interim decision completes the agency’s months-long review on the use of M-44 "cyanide bombs," which are spring-activated devices that release sodium cyanide when an animal bites into a scented bait capsule. USDA’s Wildlife Services program uses the devices to kill coyotes and other predators that are deemed a threat to crops and livestock.

The devices have come under increasing fire from environmentalists and some congressional Democrats following a March 2017 incident in which a 14-year-old boy in Idaho was injured and his yellow Labrador killed when the dog accidentally triggered a cyanide trap intended for coyotes.

Today’s decision by EPA mandates a 600-foot buffer around homes and other residences "where M-44s cannot be applied" without written permission from the landowners.

In addition, at least two "warning signs" must be placed within 15 feet of the devices "that face the two most likely directions of approach," EPA said.

"Through our discussions, we identified new restrictions that will raise awareness and create additional buffers around where M-44s are placed, which will reduce the potential for unintended impacts on humans, pets, and other non-target animals," said Alexandra Dunn, assistant administrator of EPA’s Office of Chemical Safety and Pollution Prevention, in a statement.

USDA uses the devices to kill thousands of coyotes and other predators that prey on cattle and sheep, or damage crops, each year. The loss of sheep and cattle to predators costs the livestock industry millions of dollars annually.

"We rely on a variety of tools and techniques to meet our public service mission in the safest and most effective manner possible," said Greg Ibach, undersecretary for USDA’s Marketing and Regulatory Programs mission area. "The M-44 plays an important role in achieving that mission by protecting livestock and threatened and endangered species and helping to stop the spread of disease."

EPA in August released new safety rules, which included the warning signs, and issued an interim decision allowing the continued use of the M-44 devices (Greenwire, Aug. 8).

Now EPA says the new requirements increase safety, allowing for USDA to continue using the devices, which were first registered in 1947, according to the agency. In addition to USDA, the states of Montana, New Mexico, South Dakota, Texas and Wyoming are registered to use sodium cyanide devices.

"EPA appreciates the commitment from USDA to work with the agency to ensure that there are safe and effective tools for farmers and ranchers to protect livestock," Dunn said in her statement.

Environmental groups have filed numerous lawsuits against USDA over the use of these devices, as well as the overall function of the Wildlife Services program.

One such lawsuit filed by a coalition of environmental groups in Colorado in 2017 resulted in USDA’s Animal and Plant Health Inspection Service stopping the use of the devices in the state until further analysis was done (Greenwire, Nov. 7, 2017).

But ranching groups argue the devices are necessary, and they were pleased with today’s decision.

That means the M-44 devices are an "important tool" for ranchers, said Ethan Lane, vice president of government affairs for the National Cattlemen’s Beef Association.

"Livestock producers have to contend with predation of livestock on a daily basis and having access to every tool in the toolbox allows our ranchers to continue to protect the herd," Lane said in a statement.

Environmentalists were disappointed by the decision, saying the devices pose a threat not only to humans but also to animals that are not predators, including federally protected species.

The Western Environmental Law Center said in a press statement that USDA’s own data shows the M-44 devices killed 6,579 animals in 2018, mostly coyotes and foxes, but also more than 200 non-target animals, including a bear.

"This appalling decision leaves cyanide traps lurking in our wild places to threaten people, pets and imperiled animals," said Collette Adkins, carnivore conservation director at the Center for Biological Diversity, in a statement.

"The EPA imposed a few minor restrictions, but these deadly devices have just wreaked too much havoc to remain in use," she added. "To truly protect humans and wildlife from these poisonous contraptions, we need a nationwide ban."

Correction: A previous version of this story mischaracterized an EPA interim decision in August regarding the M-44 devices.