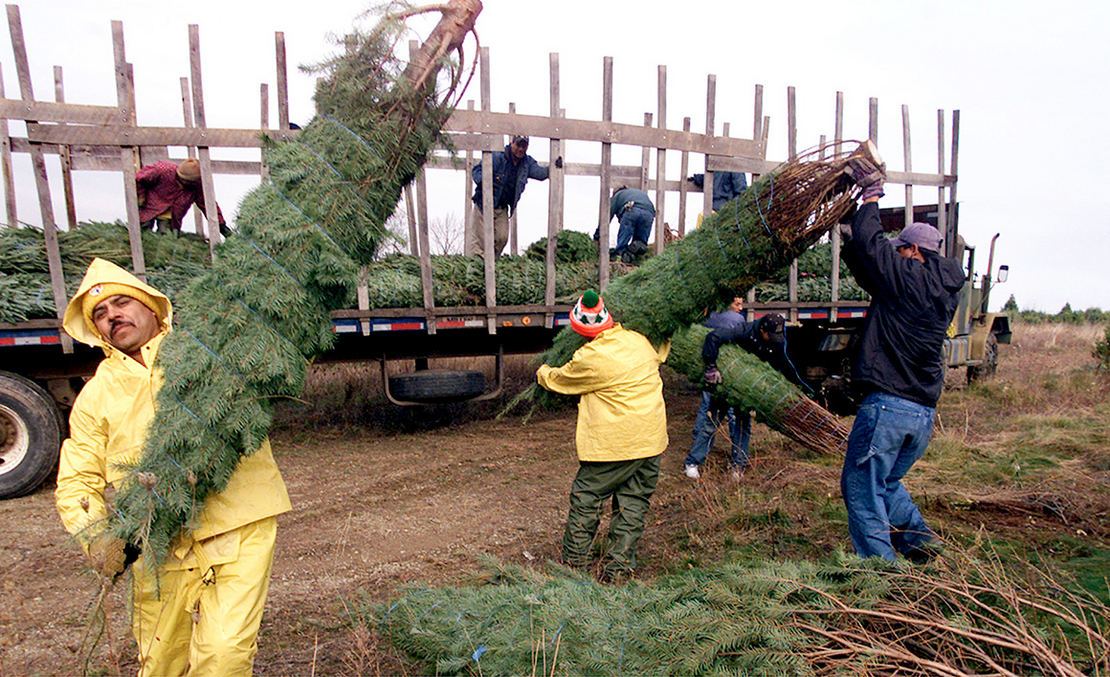 Farmworkers load baled Christmas trees onto a trailer at a nursery in Pennsylvania. Despite EPA’s chlorpyrifos ban, some farmworkers, including those at plant nurseries and Christmas tree farms, will still be exposed to the chemical tied to brain damage. AP Photo/Bloomsburg Press Enterprise, Bill Hughes

Some farmworkers will continue to be exposed to chlorpyrifos, a pesticide tied to brain damage, despite EPA’s much-touted decision to ban its use on foods.

Chlorpyrifos has been linked to neurological effects and other detriments, so ending its application on food — which accounts for 90 percent of its use — is a big public health move more than a decade in the making.

But the pesticide can still be used on nonfood crops. That leaves behind farmworkers at plant nurseries, greenhouses and Christmas tree farms, who will continue to be exposed to the nerve agent.

EPA Administrator Michael Regan called the ban “an overdue step to protect public health.” He said, “Ending the use of chlorpyrifos on food will help to ensure children, farmworkers and all people are protected from the potentially dangerous consequences of this pesticide.”

But critics point to the loopholes in EPA’s announcement last month.

“If there’s no safe exposure, there should be no exposure,” said Elizabeth Strater, director of alternative organizing at United Farm Workers.

Part of the issue is that environmental groups have been pressing EPA to eliminate the chemical under the Federal Food, Drug and Cosmetic Act. Under the law, EPA establishes tolerance levels for the amount of pesticides that can remain on food when it goes to market.

In the case of chlorpyrifos, the 9th U.S. Circuit Court of Appeals ruled in April that the agency had to either ban the pesticide in food or set a tolerance level reflecting its developmental impacts on kids (E&E News PM, April 29).

But because the Food, Drug and Cosmetic Act is mostly concerned about the amount of a pesticide left on food when it gets to consumers, the ruling did not have any requirements for EPA to take action to protect farmworkers.

Strater says banning chlorpyrifos on food crops is a “big step in the right direction,” but not an equitable one.

“Why is it acceptable to continue to expose farmworkers, who are already so vulnerable?” she said. “It feels like environmental racism to accept farm worker exposure when it is a chemical too dangerous for everyone else.”

In particular, laborers working at plant nurseries in greenhouses or Christmas tree farms could continue to be exposed to the pesticide. So, too, could workers who mix and spray the pesticide.

Earthjustice attorney Patti Goldman, who began litigating the issue 15 years ago, agreed it is “very concerning.”

“Unfortunately, the way our laws work, we have a very strong law for pesticides on our food and all the ways people are exposed to those and not as strong protections for the workers,” she said, adding she is particularly concerned about greenhouse workers because “it is enclosed and humid, so the exposures in there are very scary.”

An EPA spokesperson said the agency “is continuing to evaluate the potential risks posed by chlorpyrifos for the nonfood uses” and has a deadline to complete that review under the Federal Insecticide, Fungicide and Rodenticide Act by October 2022.

“Through this process, EPA is ensuring that each pesticide’s registration is based on current scientific and other knowledge, including its effects on human health and the environment,” he said in an email.

Karen Reardon, vice president of public affairs at Responsible Industry for a Sound Environment, a trade organization for the pesticide industry, said that because greenhouses are indoors, there’s less need for pest control and that chlorpyrifos is required to be fogged into a greenhouse in the evening, when workers are not there.

If farm operations are following pesticide label instructions for safe applications, use of chlorpyrifos in those settings is safe, she said.

She didn’t comment on whether the group would oppose EPA banning the pesticide for all uses but called chlorpyrifos “an important tool in a toolbox with other options in the mix as well.”

Goldman, at Earthjustice, said the group will continue to push EPA to ban chlorpyrifos altogether next year.

“I’m hopeful EPA will do the right thing, because it is the same pesticide that poisons people who are exposed to it,” she said. “Any exposure is not worth it and needs to stop.”