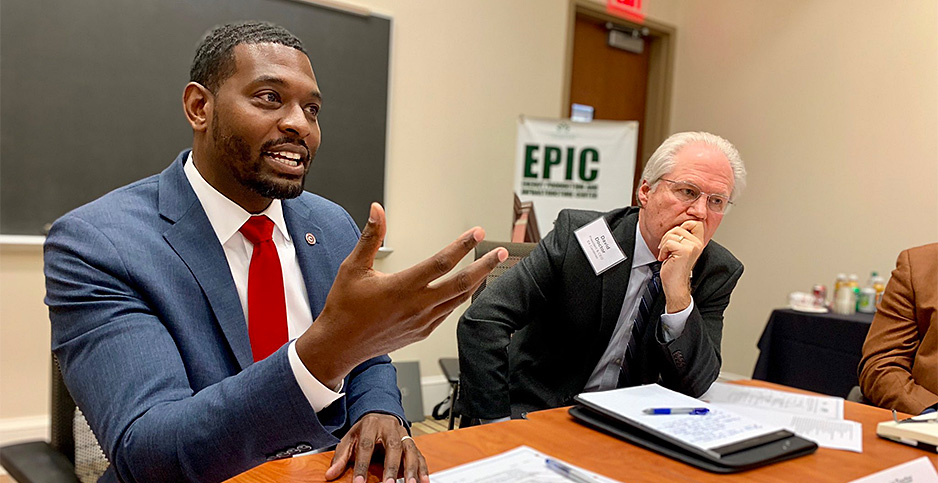 Michael Regan (left), President-elect Joe Biden's pick to head EPA, has maintained some goodwill with the agriculture industry in North Carolina, despite hitting some bad actors with high fines. Regan is the director of the North Carolina Department of Environmental Quality. @Michael_S_Regan/Twitter

For a man who recently slapped a nearly $90,000 fine on a polluting hog farm in North Carolina, Michael Regan has managed to hold on to the goodwill of the industry behind the problem.

In line to become EPA administrator in the Biden administration, Regan — now the director of the North Carolina Department of Environmental Quality — will shape the environmental agency’s approach to large livestock farms that both pollute and support agricultural communities. Environmental and farm organizations say he’s balanced the competing priorities, and industry groups say they’re not worried — yet.

"Secretary Regan made a point to educate himself about our industry and issues. He visited our farms and listened carefully to our concerns," the North Carolina Pork Council said in a statement. "While we don’t always agree, we respected each other and shared a commitment to clean water, clean air and economic progress for everyone."

But if he is confirmed by the Senate, Regan will face pressure from progressive groups and congressional Democrats to step up the fight against pollution from large livestock farms.

One of the new administrator’s early tasks will be to develop models for measuring emissions of ammonia, hydrogen sulfide and particulate matter from swine, poultry and dairy farms, a process already underway at EPA.

That information could ultimately be used for additional federal regulation, although Congress has so far blocked requirements for monitoring on farms, including in the spending bill for fiscal 2021 that passed yesterday.

Regan, the 44-year-old former Environmental Defense Fund staffer, has rural North Carolina roots that may help him stand up for environmental justice — a demand of the incoming administration’s more liberal constituencies — while not antagonizing farm-country voters who’ve drifted away from the Democratic Party.

He’s visited some farms, fined others.

"When we invited him to join us for a farm tour to gain a practical understanding of how N.C. Department of Environmental Quality actions affect farmers and rural residents, he readily accepted," said North Carolina Farm Bureau President Shawn Harding in a statement. "As a native of one of North Carolina’s top agricultural counties, Regan carries insight into the broader scope of the impact of environmental policy, which we believe will serve him well as the nation’s top environmental regulator."

That balance was evident when Regan pushed back against efforts to limit nuisance lawsuits against big livestock farms, said Ken Cook, president and co-founder of the Environmental Working Group, which has created detailed maps of hog operations in North Carolina. Regan opposed state legislation to cap payments to neighbors who filed such cases, possibly persuaded by EWG’s analysis of the number of affected property owners — in the thousands, Cook told E&E News.

"Regan early on took great interest in it," Cook said, even as the Republican-led Legislature passed it over Democratic Gov. Roy Cooper’s veto. "It was a courageous stand."

But Regan didn’t make the issue just about pollution, Cook said. "He was deft in making the issue about property rights," he said.

Others in the environmental movement aren’t as impressed.

While Regan was a good listener, he passed up a chance to end permits for farms that use older manure management systems that rely on lagoons and regular spraying of fields, said Elizabeth Haddix, managing attorney at the Lawyers’ Committee for Civil Rights Under Law, a nonprofit that’s fought the practice as racially discriminatory.

Communities of color are particularly affected since they’re more concentrated around the farms, according to the group, and Regan could have refused to renew pollution permits.

"Our clients begged him to do that," Haddix said. "That was a horrible disappointment for us."

Large concentrated animal feeding operations, sometimes with several thousand animals, fall under federal regulations overseen by EPA, as well as by state laws that aim to prevent manure lagoons from overflowing and to keep air emissions within federal limits.

Eastern North Carolina, where the industry is heaviest, is especially vulnerable because of periodic flooding from tropical storms and hurricanes. There, the state has bought out some farmers to cut down on hog operations, although funding for the initiative has sometimes been scarce (Greenwire, Sept. 24, 2018).

Earlier this year, a manure lagoon overflowed on an farm with over 2,500 hogs in Sampson County, where the owner had allowed the level to remain high for a prolonged period of time and hadn’t regularly monitored it, the agency said. Some 3 million gallons of liquefied manure flowed into nearby waterways, killing around 1,000 fish, according to the DEQ, which issued a notice of violation.

"The egregious nature of the violations and the severity of the environmental harm in this case require a serious penalty that holds the owner accountable for not operating in compliance with their permit conditions and the laws of North Carolina," Regan said in a statement at the time.

In both cases, the farmers were contract growers for Smithfield Foods Inc., meaning the company owned the animals — and risked bad publicity from its contractor’s missteps.

Livestock industry groups say regulation of big hog and poultry operations is generally too heavy-handed, and they’ve supported the Trump administration’s more deferential approach to farmers and their lobbying groups.

The Biden administration is likely to tilt away from the Trump philosophy — to a yet-to-be-determined degree.

The president-elect has called for zero greenhouse gas emissions and for more methane digesters on livestock farms, but he hasn’t spelled out how he’d approach CAFOs.

"As DEQ secretary in North Carolina, a leading pork-producing state, he always had an open door, valued diverse points of view, and worked to find solutions that ensured science and data were guiding decisions," said NPPC President Howard Roth. "We hope those same qualities will be carried over to his leadership at EPA."

Haddix, at the Lawyers’ Committee, said Regan, who would be the first Black man to lead EPA, has said "beautiful things" about environmental justice but will surely face the same kinds of pressure in Washington that he did in North Carolina, where Republicans control the Legislature.

"We need a fearless and steadfast leader," Haddix said. "I just hope he remembers the voices he heard down here."