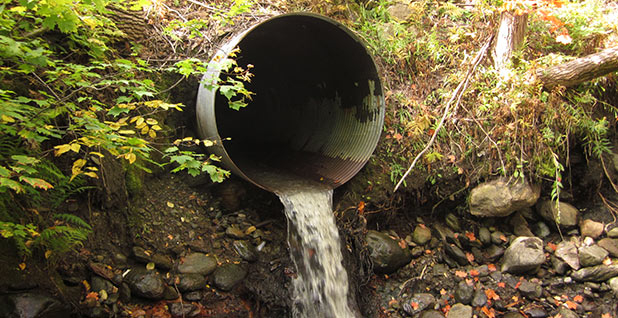 EPA yesterday unveiled a nonenforceable strategy for addressing contamination from so-called forever chemicals in wastewater — a proposal that is drawing everything from harsh criticism to cautious optimism.

In a memo sent to all 10 regional offices, EPA Assistant Administrator for the Office of Water David Ross laid out an interim strategy for per- and polyfluoroalkyl substances (PFAS) through federally approved wastewater permits under the National Pollutant Discharge Elimination System (NPDES). EPA also released information about progress toward developing analytical methods for detecting PFAS in wastewater.

EPA Administrator Andrew Wheeler in a statement said the approach represents the first time the agency is using program offices to address a "singular, cross-cutting contaminant" while supporting state and local partners.

Critics blasted the agency’s voluntary approach, accusing EPA of moving too slowly on developing ways to detect more than 9,200 PFAS, and called for faster action and mandatory limits.

But at least one former EPA official said the agency’s strategy offers a promising first step that the incoming Biden administration could build upon.

"Biden’s EPA will want to keep this strategy but will also want to accelerate work on an effluent limitation guideline for PFAS discharging industries since that guideline will provide permit limits to reduce discharges, not just monitor them as this strategy does," Betsy Southerland, a former career official in EPA’s Office of Water, said in an email.

At issue is EPA’s NPDES memo, which includes recommendations from the PFAS NPDES Regional Coordinators Committee, including incorporating permit requirements around PFAS in wastewater discharge, as well as for industrial stormwater and storm sewer systems. The committee also recommended information sharing on permitting practices and continuing the working group, composed of representatives from EPA regions along with other cross-agency members.

Those suggestions would apply to areas where EPA is the permitting authority, including Massachusetts, New Mexico and New Hampshire, along with the District of Columbia. Most U.S. territories, some parts of Indian Country and certain federal facilities would also be affected.

EPA also said it anticipates phasing in validated wastewater analytical methods for detecting PFAS. The agency said it is developing those methods with the Department of Defense and anticipates multilab validated testing for the chemicals to be finalized next year.

EPA released a list of 40 PFAS currently targeted for analytical method development, including the most notorious of the chemicals, PFOS and PFOA.

Also included is HFPO-DA, a chemical compound that is part of the GenX process. Trademarked by the DuPont spinoff Chemours Co., GenX has contaminated water in North Carolina and spurred significant litigation (Greenwire, Aug. 14).

Kyla Bennett, a director with Public Employees for Environmental Responsibility, noted that EPA methods only support the detection of 29 PFAS in drinking water even though the family contains thousands of chemicals. She also said private labs are moving much faster than the federal government.

"We’re going to have to hold Biden’s feet to the fire," Bennett said, voicing her concern about the president-elect’s adding Michael McCabe, a former EPA official and consultant for DuPont, to his EPA transition team. "This honeymoon with Biden should be short-lived. EPA is a mess, and PFAS is a disaster."

But Southerland said the strategy EPA released yesterday is "very reasonable" because it recommends monitoring as soon as analytical methods are available, which will speed up monitoring at facilities that EPA oversees, rather than waiting for those methods to be formally adopted through rulemaking.

Southerland also said it is "curious" that the agency didn’t mention its much-touted PFAS Action Plan, a 72-page document EPA released in February 2019. That plan calls for "initiating steps" to evaluate the need for mandatory limits on PFAS, along with commencing the process of designating the forever chemicals as hazardous substances.

"Obviously the monitoring data collected once this strategy is implemented would be key data for the effluent limitation program, but again that is not mentioned here," Southerland said.

Sensible plan or an ‘insult’?

PFAS have emerged as an area of heightened public concern due to health risks including cancer. Scrutiny has centered on water, as some PFAS have bioaccumulative properties and build up in the body along with consumption. EPA has been under mounting pressure to regulate the chemicals in drinking water through a maximum contaminant level.

While the Trump administration has frequently referenced its PFAS efforts, EPA has not established drinking water limits, and the agency currently only has a health advisory of 70 parts per trillion for PFOS and PFOA.

In a statement praising the new permitting guidance, Ross said managing and mitigating PFAS in water is a priority for his office. He added the new strategy marks a key step "in developing the underlying science and permitting techniques to address PFAS in wastewater where the discharge of these chemicals may be of concern."

PFAS in the waste stream are inevitable given their presence in everyday household items like nonstick pans and dental floss. Experts from trade organizations like the Northeast Biosolids and Residuals Association have said PFAS are likely in all wastewater as a result. That reality is proving costly for water utilities, and lobbying disclosures show those entities have been active on the issue (E&E Daily, June 11).

One major source of concern for water utilities is the possibility of PFAS being declared hazardous substances under the federal Superfund law. EPA yesterday said it is still working on a proposed rule designating PFOS and PFOA as hazardous substances.

Scott Faber, senior vice president for government affairs at the Environmental Working Group, called the announcement "an insult to the millions of Americans who are drinking water contaminated with PFAS" and said more work is needed.

"The EPA should be issuing tough, mandatory standards to regulate PFAS discharges from thousands of industry facilities, not ‘encouraging’ industry and regulators to ‘consider’ whether to limit releases of toxic chemicals building up in the blood of every American," said Faber.