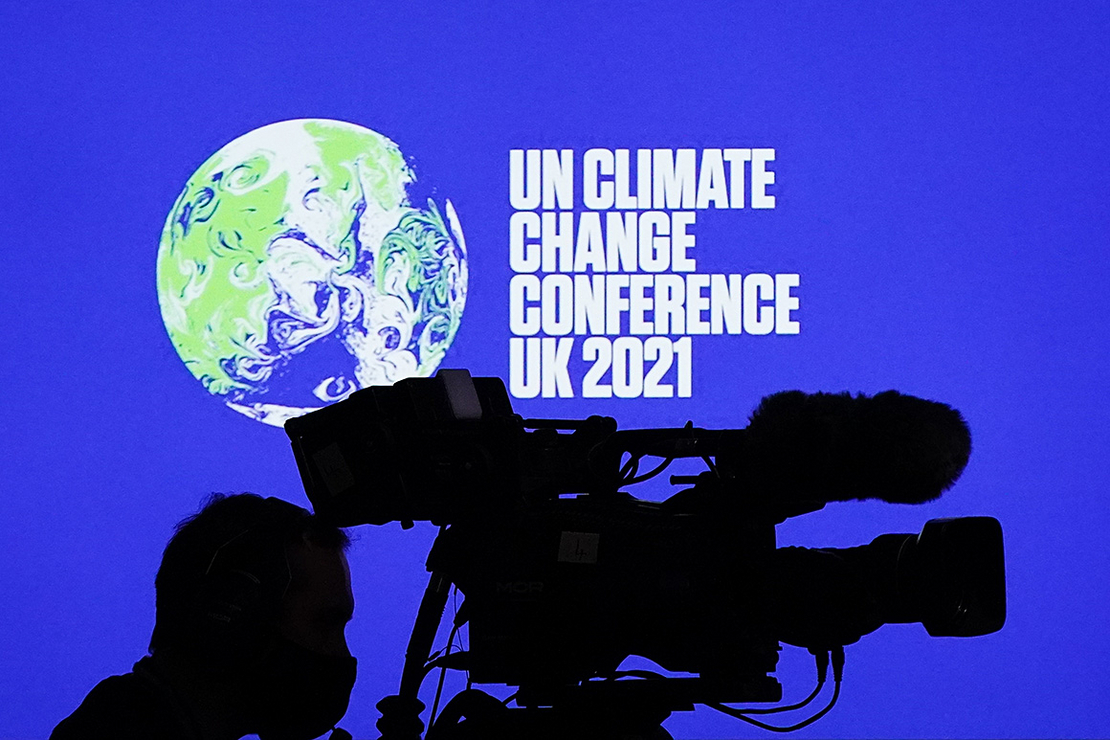 A camera operator records events in a conference room on day 12 of COP 26 in Glasgow, Scotland. Ian Forsyth/Getty Images

GLASGOW, Scotland — A top EPA official said today that the agency early next year will strengthen its proposal for regulating emissions of methane from oil and gas infrastructure.

Speaking at a roundtable here hosted by environmental groups focused on methane, EPA acting air chief Joe Goffman said the agency will issue a "supplemental proposal" for the potent greenhouse gas that would “extend the already ambitious proposal last week into an even more ambitious one.”

EPA released its twin methane proposals for new and existing oil and gas infrastructure last week at the Conference of the Parties, or COP 26, during a methane-themed day. But the drafts included numerous requests for more information on key issues, like how small oil and gas operations would be regulated and whether producers would be allowed to use routine flaring to burn off gas produced during oil drilling.

The objective, said Goffman, is to ensure a final rule that captures more methane from a broader set of sources.

He called EPA’s promise of a supplement “a marker or a very strong signal of just how extensive and ambitious we would hope the final rule would be."

EPA’s proposals also floated a new idea of giving front-line communities that have frequently been subject to health impacts from local emissions sources a bigger role in forcing cleanup.

“What we’ve introduced in this proposal is a path by which communities can undertake their own monitoring of facilities, report data — and again, this is still conceptual — create an obligation on the part of operators who are associated with that data to undertake additional repairs or replacement of their equipment,” said Goffman in an interview with Environmental Defense Fund President Fred Krupp.

The public and third-party experts have been given 60 days to weigh in on the two proposals, including supplying requested information. Those answers will help inform the supplemental proposal, Goffman said, which will in turn put EPA on course to finalize the rules by the end of next year.

EPA is also in the process of improving the way it measures and tracks methane as part of its inventory of greenhouse gas emissions. But last week’s proposals still used EPA’s existing inventory to estimate which sources are likely the largest methane emitters, deserving of the most stringent standards for monitoring and repair.

Goffman said today that one of the things the supplement would look at — with input gathered during this public comment period — would be how to continually ensure that the rules respond to improvements in data.

Environmental groups like the Clean Air Task Force and EDF have pressed EPA to regulate low-producing wells, arguing that emissions and production levels don’t always go together. And they’ve urged the agency to phase out flaring.

But Lindsey Baxter Griffith, the federal policy director for CATF, noted that this month’s draft rules were completed quickly and timed for release during the COP. And regulating flaring, in particular, requires EPA to coordinate with the Bureau of Land Management — which is still writing its own waste prevention rules for production on federal lands.

“We want to have the opportunity to put more information and more technical know-how in front of EPA to make sure that they can make this a very, very strong rule,” she said.

Methane has been a prevailing theme at this COP and central to the Biden administration’s bid to reclaim leadership here. The U.S. joined with the European Union in launching the Global Methane Pledge, which called on countries to cut emissions of the powerful greenhouse gas by 30 percent across their economies by 2030. To date, 108 countries have signed on.

China has not joined the pledge. But yesterday the U.S. and China rolled out a new accord for short-term climate cooperation in which China pledged to write its own methane abatement plan by next year’s U.N. confab in Egypt.

Goffman said that EPA could share lessons learned with other countries anxious to crack down on methane, which is more than 80 times as climate-forcing over 20 years as carbon dioxide.

“Whereas it took EPA over a decade to put all of this in place, all of which was indispensable to get us to here, we think we can take those decades of investment and really deliver the learning in a much shorter period of time; the templates, the models, the lessons of experience to nations that have created their own incentive to seize on those learnings either from their own [Paris commitments] or the global methane pledge,” he said.

EPA Administrator Michael Regan visited COP 26 earlier in the week to tout U.S. climate policies, including the methane rules. During his visit he pledged to strengthen EPA’s proposed emissions rules for cars and trucks, which have been panned by environmentalists as too lax.

And he said again that EPA will regulate power plant CO2, referencing “opportunities” to cut emissions inside the fence line at power plants that he said were not available a decade ago, when the Obama administration wrote its Clean Power Plan.