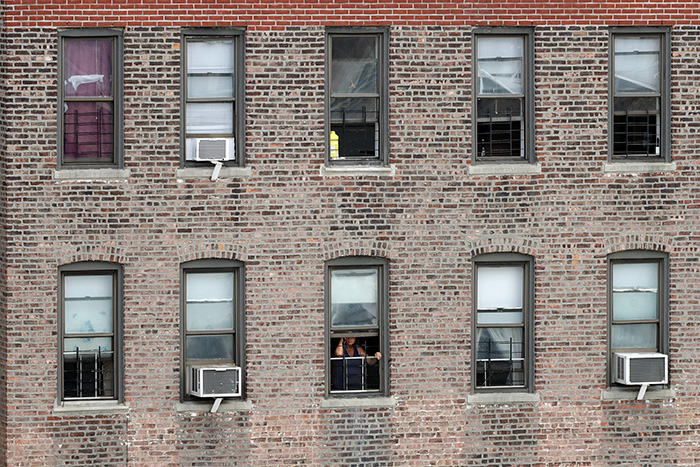 A woman looks out from her apartment window on a hot summer day in the Bronx, N.Y., as her neighbors try to keep cool with window air conditioner units. Mark Lennihan/Associated Press

An EPA rule currently under review at the White House would phase down climate superpollutants used in cooling and refrigeration, paving the way for the United States to comply with a global deal the Obama administration helped broker five years ago.

EPA’s rule would slash hydrofluorocarbons, or HFCs, by 85 percent by 2036 as authorized by Congress late last year. EPA is expected to meet a Sept. 23 statutory deadline to finalize the rule, which is widely expected to hew closely to its May proposal.

The plan also would set the United States on a path to meet its obligations under a 2016 amendment to the Montreal Protocol governing ozone emissions, which advocates hope the Biden administration soon will ask the Senate to ratify.

The rule details how U.S. manufacturers should go about phasing down HFCs, which can be thousands of times more potent in driving climate change than carbon dioxide.

That includes establishing a baseline for HFC production in the United States, capping that production and allocating allowances that let companies produce HFCs in declining quantities. These allowances could be traded.

The rule would take effect at the start of next year, but it only outlines allowance allocations for 2022 and 2023. Allocations for subsequent years will be released in a future rulemaking.

This month’s action doesn’t reinstate Obama-era rules that required industry to stop using the most potent HFCs when there are more climate-friendly alternatives available for the same uses.

The Natural Resources Defense Council, the Institute for Governance and Sustainable Development, and the state of Colorado have petitioned the agency to bring back the so-called Significant New Alternatives Policy, or SNAP, rules for HFCs.

The rules were invalidated by the courts prior to enactment of the American Innovation and Manufacturing (AIM) Act in December, which provided EPA with new power to control the superpollutants. While that will enable EPA to reinstate the rules, doing so will take time.

The HFC phasedown is popular with the covered industry and with environmentalists, who have backed the AIM Act and are pushing for the U.S. ratification of the Kigali Amendment. But many stakeholders have asked for tweaks to the May proposal, and the Office of Management and Budget has held meetings this week and last ahead of the rule’s expected release next week.

NRDC, which is scheduled to meet with OMB on the rule today, has asked the agency to reconsider its proposal not to require appliance importers to secure allowances for their HFCs.

The proposal requires allowances for the import of bulk HFCs, but not appliances.

In theory, air conditioners and other equipment manufactured abroad would be covered by the Kigali production cap for their country of origin. But in practice, experts say that even if products are manufactured in a country that has ratified the HFC amendment and accepted caps, ensuring compliance can be tricky.

Failing to account for HFCs already built into appliances can undermine the integrity of the U.S. cap, they say, and is not consistent with the AIM Act.

Environmentalists also are pressing EPA to retain the proposal’s ban on HFC-23, which packs a particularly dangerous punch for the climate.

And they want the agency to stand firm on its proposal to end the use of disposable cylinders they say release HFCs after they are discarded. Single-use cylinders have been a significant source of illegally imported HFCs in the European Union.

Most U.S. manufacturers have long backed the HFC drawdown, and stand to benefit from the trade of more climate-friendly alternatives that they have developed. Still, some of them have called for tweaks to the proposal.

Kevin Fay — executive director of the industry-backed Alliance for Responsible Atmospheric Policy, which was scheduled to meet with OMB this week — said manufacturers want an adjustment to the way historic production baselines are calculated for the purpose of allocating allowances.

EPA’s actions lay the groundwork for U.S. participation in the Kigali Amendment. But President Biden has yet to make good on his “Day One” pledge to send the agreement to the Senate for approval. The White House didn’t respond to inquiries.

Ratification requires 67 votes in the Senate, which means 17 Republican senators would need to join all 50 Democrats in backing ratification. Fay expressed optimism that U.S. manufacturers could galvanize that level of GOP support after their success last year with the AIM Act.

“But we’re not claiming that we have them yet,” he cautioned.

“Our experience and our conversations throughout the halls of government, including Congress and the agencies and the White House, have been positive,” he added. “We think this is still a doable deal, but we’ve just got to get through the process.”

The Kigali Amendment, which sets a schedule for phasing down HFCs globally, could help the world avoid half a degree Celsius of warming by the end of the century.

That’s significant in itself, said Kristen Taddonio, a climate adviser with the IGSD. But it’s only one part of a comprehensive effort to curtail methane and other pollutants that, like HFCs, contribute greatly to climate change in the short term.

“The latest science indicates that if humanity significantly scales back emissions of these short-lived climate pollutants we can cut the rate of global warming in half, and by midcentury we can avoid two to six times as much warming as we could if we just reduce CO2 alone,” she said.

“So we’re just so excited to see the world stepping up, phasing down and joining other major economies including China that have now also committed to the same action,” she added.

Biden came to office pledging that U.S. action on Kigali would push the largest developing economies to sign on. But China, in a surprise move, ratified Kigali in June. And India announced last month it would follow suit.

The State Department has prepared the needed documents for U.S. ratification, but the White House has not sent them to the Senate.

Fay said a domestic transition away from HFCs wouldn’t create as many U.S. manufacturing jobs as formally joining Kigali.

“It’s about continued U.S. technology leadership. It’s about technology neutrality at the global level, so that our technology has the ability to be a leader. And it’s about market share,” he said.