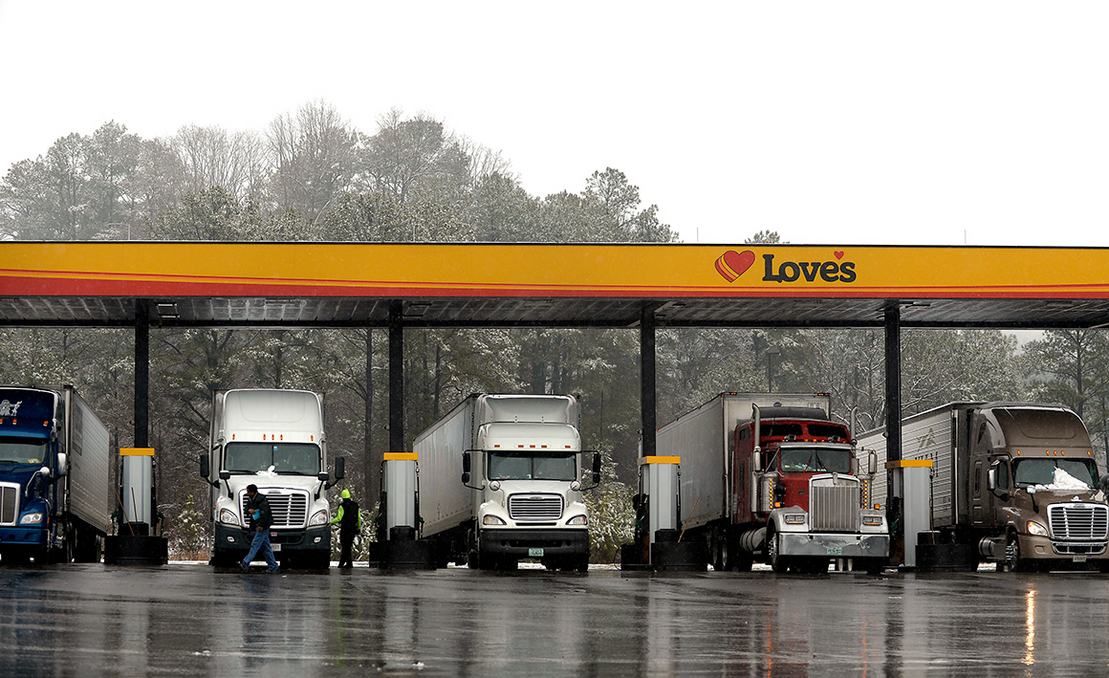 Truck drivers stop at a gas station in Emerson, Ga., north of Atlanta, to fill up their tractor-trailer rigs. EPA this month is expected to unveil a rule to clean up highway freight-related pollution, which advocates say could make or break state-led efforts to adopt zero-emissions trucking rules. AP Photo/David Tulis, File

A growing number of states are working to dramatically transform the U.S. trucking industry by enacting electric vehicle requirements. But simmering tension over a forthcoming federal standard could make or break those efforts, advocates say.

EPA is expected this month to unveil a rule to clean up highway freight-related pollution. While heavy-duty trucks make up a fraction of the country’s vehicle fleet, they spew the vast majority of planet-warming emissions and harmful air pollution, such as nitrogen oxide and particulate matter.

President Biden has committed to cut carbon emissions by up to 52 percent above 2005 levels by decade’s end.

“If EPA were to move forward with a weak rule, we will completely miss the mark,” said Katherine Garcia, the Sierra Club’s top transportation campaigner. “And there is no time for delay.”

The rule is considered especially important for reducing smog and other localized toxic pollutants in low-income areas and communities of color that are disproportionately located near highways and freight corridors and bear the brunt of associated pollution.

Currently, over a third of the U.S. population lives in an area that does not meet federal standards for ozone, particulate matter or both, according to the National Association of Clean Air Agencies (NACAA).

But truck industry representatives say if EPA enacts a rule that’s too stringent, it would increase the costs of new trucks, disrupt the market, and create significant job losses and economic harm.

In a meeting with the White House last month, representatives from the Truck and Engine Manufacturers Association (EMA) presented their case, arguing the administration should not replicate the rule recently adopted by California.

While EMA says it’s in favor of electrifying the commercial fleet, the trade group maintains California’s policy, called the Advanced Clean Truck rule, is not the way to go.

On the other side of the fight are scores of environmental advocates, Democratic lawmakers and state attorneys general who for months have urged the administration to issue a rule in line with California’s standard (Climatewire, Nov. 9, 2021).

Late last year, California adopted the Advanced Clean Truck rule, which requires a growing percentage of all new medium- and heavy-duty trucks to be zero-emissions beginning in 2025. Washington state, Oregon, New York, New Jersey and Massachusetts followed suit. Manufacturers in those states will be required to ratchet up zero-emissions truck sales between 40 and 75 percent by 2035.

California and Oregon also have adopted a Heavy-Duty Omnibus rule, which boosts fuel economy for fossil fuel-powered trucks, making them up to 90 percent cleaner.

Angelo Logan, a policy and campaign director for the Moving Forward Network, said it is essential EPA adopts both the Advanced Clean Truck rule and the Heavy-Duty Omnibus rule to rein in emissions and spur electric truck adoption.

“It’s really important for EPA to take this seriously and be really aggressive with it,” Logan said.

For Logan, the rule is personal. He grew up in a neighborhood in East Los Angeles at the intersection of the 710 freeway and four major rail yards. The freeway and rail systems are used to transport goods from the ports of Los Angeles to the rest of the country. About 40 percent of all goods that enter the United States by ocean come through Los Angeles.

“The amount of diesel exhaust because of the trucks and the trains and the ships and all that equipment used to move the goods, it’s just so concentrated that it creates a real high cancer risk,” Logan said. “We’re paying for cheap goods through our lungs.”

A Natural Resources Defense Council report found that adoption of both the Advanced Clean Truck rule and Heavy-Duty Omnibus rule would result in 3,900 avoided deaths and 3,150 avoided hospital trips from 2022 to 2050 in California.

In addition to Washington state, Oregon, New York, New Jersey and Massachusetts, other states are considering adopting clean truck rules. Maine has started the process of enacting the Advanced Clean Truck rule this year, while Maryland, Connecticut, Colorado, Illinois and Vermont have signaled a willingness to consider new truck regulations.

Still, for the most part, state and local air agencies lack the authority to fully regulate mobile sources like trucks, according to NACAA. That means reducing harmful air pollution will continue to be an uphill battle for states without a federal rule.

The last time EPA issued an updated rule for tailpipe nitrogen oxide and particulate emissions was in January 2001.