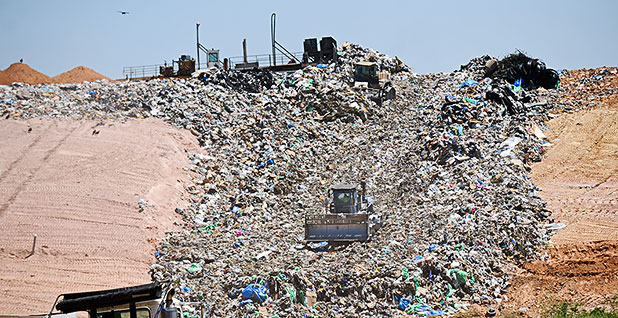 U.S. EPA has closed a 14-year-old civil rights compliant about the Stones Throw Landfill near Tallassee, Ala. Photo courtesy of Earthjustice.

U.S. EPA closed a 14-year-old civil rights complaint against a landfill in a predominantly black community in Alabama last month, telling a federal court that legal challenges over its slow response to the case are moot.

Phyllis Gosa, a sixth-generation resident of the Ashurst Bar/Smith Community, filed the complaint in December 2003 after she was told a road was going to cut through 2 acres of her family’s property to accommodate the reopening and expansion of the dump. She alleged discrimination by state regulators in approving permit changes to the Stone’s Throw Landfill.

"No one contacted me or any of the people in the community that this modification was in play," Gosa told E&E News. "We had no clue that this was getting ready to take place."

EPA told attorneys representing Gosa in an April 28 letter that it had closed the book on her complaint. Days later, the agency asked a federal court to toss legal challenges over its long-delayed response.

Environmental and community advocates say EPA’s handling of the case is part of a long history of the agency failing to act on civil rights complaints. They are fighting to keep EPA in court over its delayed response to the Alabama complaint and four others that languished for more than a decade.

"With every step that EPA is taking, it’s sending a message to communities and to recipients of federal funds, to states, to local governments, that it’s not going to enforce civil rights law," said Marianne Engelman Lado, an Earthjustice attorney and a visiting professor at Yale Law School. "And that nobody should have the expectation that civil rights law will be enforced."

The 1964 Civil Rights Act created the process allowing individuals to file complaints alleging discrimination based on race, color or national origin in federal programs. By law, agencies are given 180 days after accepting a complaint to investigate and issue preliminary findings.

The Ashurst Bar/Smith Community in the central Alabama town of Tallassee was settled by newly freed slaves after the Civil War. Gosa, 64, and many other residents trace their roots to those original landowners.

EPA accepted the complaint in 2005, kicking off the 180-day statutory clock.

But the community heard little about the matter for years.

"This kind of died down for us around maybe 2006," said Ron Smith, 65, who leads an informal citizens group and says his house is less than 3,000 feet from the dump.

"People just kind of gave up. A lot of the senior citizens passed away. Nobody was getting any results."

‘Landfill of the year’

The Stone’s Throw Landfill got all the state permits it needed, and it grew. Where it once took trash from about 20 counties, it now serves all 67 counties in Alabama and three in Georgia.

The landfill owner, Advanced Disposal, touts its "exceptional environmental record." In 2015, the Alabama Department of Environmental Management (ADEM) presented it with the "Landfill of the Year Award," an award based partly on compliance with regulations and community involvement.

But the landfill’s neighbors tell anecdotal stories of noisy garbage trucks speeding along windy, dusty streets, of buzzards circling the sky over the local church and of unbearable odors. Smith said that residents are afraid to maintain gardens or draw water from local sources, and that many people have moved out.

"The landscape of the community is nothing like it used to be," said Gosa, who now lives in Selma, Ala., but still has family members in the neighborhood.

In 2013, EPA dismissed one of the allegations in Gosa’s complaint — that ADEM discriminated against residents during the public involvement process for the permitting of the landfill.

But the agency didn’t address whether the siting of the landfill had a "discriminatory effect" on the predominantly African-American community.

Earthjustice and Yale Law School’s Environmental Justice Clinic brought a lawsuit against EPA in 2015, alleging that the agency had illegally sat on the complaint and four others for more than a decade.

While the lawsuit focused on those five complaints, environmental and community advocates sought a broader shift in the way the agency approaches civil rights issues.

Last year, the U.S. Commission on Civil Rights found that EPA had failed to meet its obligations under the law. The report found that EPA’s Office of Civil Rights had dismissed nine out of every 10 complaints and had never formally found a violation of Title VI of the Civil Rights Act.

Engelman Lado said the concern about enforcing civil rights extended throughout the Obama administration — although she noted that Obama officials had "an interest in saying, ‘OK, how can we do things differently?’"

On Jan. 19, the day before President Trump’s inauguration, the Obama EPA issued a rare finding that the "preponderance of evidence" showed that the Michigan Department of Environmental Quality had "engaged in discrimination involving the placement" of the Genesee Power Station in a black neighborhood (Greenwire, Jan. 26).

Only once before had EPA found discrimination. In 2011, the agency faulted California pesticide regulators for approving the annual spraying of a toxic chemical near six schools in primarily Latino neighborhoods in Ventura, Monterey and Santa Cruz counties.

A few days after the Michigan finding, EPA asked the U.S. District Court for the Northern District of California to dismiss the lawsuit.

Along with raising a host of procedural issues, including that plaintiffs lacked legal standing to bring their charges, the agency said it had resolved three complaints including the Michigan one.

In June 2016, the agency dismissed the California complaint via letter. And early this year, EPA entered into an informal agreement with the New Mexico Environment Department relating to the Triassic Park waste facility.

On April 28, EPA’s External Civil Rights Compliance Office (ECRCO) issued a letter finding no evidence of discrimination in the Alabama environment department’s decision to permit the 2003 modifications at the Stone’s Throw Landfill.

In the letter, EPA said there was "insufficient evidence" to link ADEM’s alleged failure to consider certain siting factors to the "disparate adverse harms alleged by complainants."

The agency also found the landfill had taken steps to address the community’s complaints, including installing an emission-control system and groundwater monitoring. EPA didn’t address concerns that the landfill would create a stigma for residents or affect property values.

"ECRCO finds insufficient evidence to conclude that ADEM violated Title VI and EPA’s nondiscrimination regulation in regard to the 2003 permit modification at issue in this case," EPA wrote.

In a May 1 filing notifying the court of its decision, the agency reiterated that the lawsuit should be dismissed.

But activists are worried that EPA is merely trying to avoid legal sanctions for sitting on the complaints.

"They’re quickly trying to close these cases to moot the litigation out, to get it kicked out of court by saying, ‘Well, now we’ve done the investigations,’" Engelman Lado said.

Leah Aden, a senior counsel at the NAACP’s Legal Defense and Educational Fund who is representing the residents, said EPA never took into account the ongoing concerns residents have with the landfill.

"All of these and many of these complaints have languished for years at the EPA with no one stepping up to fully and completely investigate these claims and actually call a spade a spade — which is this is environmental discrimination. This is racial discrimination," Aden said.

The advocates still want the court to find EPA repeatedly has blown deadlines on civil rights complaints. Timely enforcement, they argue, could have halted some of the "most tragic consequences" of allowing discriminatory actions to go unchecked at state agencies — a reference to the recent lead contamination crisis involving Flint’s drinking water.

In a May 5 brief, they argued that communities are entitled to a day in court.

EPA did not respond to a request for comment on the Alabama landfill or the broader concerns about the agency’s response to civil rights complaints.

While the residents filed another civil rights complaint based on permitting at the end of 2016 that lets the landfill continue operating, they’re worried its fate will be similar to the 2003 complaint’s.

"I think that our clients reasonably are concerned that they have no recourse," Aden said, "and I think that other communities can see this as an example that their concerns about environmental racism are not necessarily going to be pursued and enforced."

Activists, though, see hope at the end of EPA’s April letter closing the Alabama landfill case.

Gosa, who filed the initial 2003 complaint, pledged that residents would continue to fight.

"In this climate, it looks to be impossible and futile," she said, "but it will be if we don’t continue to raise our voices against it."