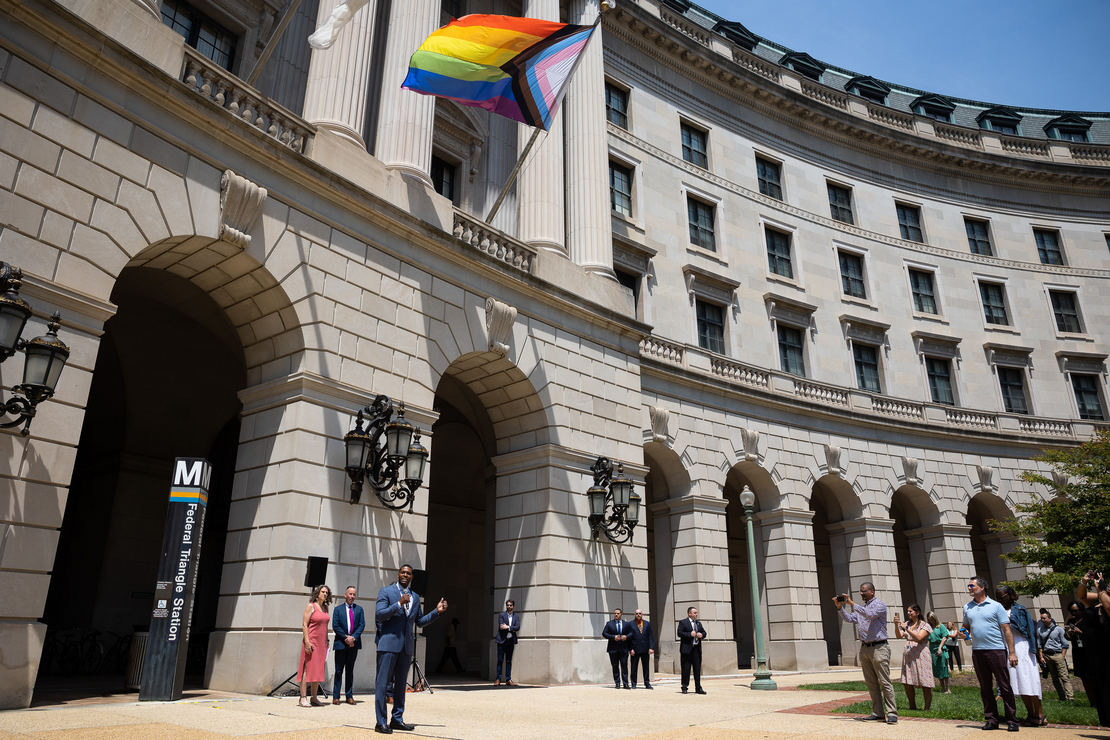 EPA made history today, raising the pride flag representing the LGBTQ+ community for the first time ever at agency headquarters.

Administrator Michael Regan came to the balcony off the third floor of EPA headquarters to raise the flag around midday to honor the start of Pride Month. A crowd below cheered as it went up.

“We just made history. This is what EPA is all about: diversity, inclusion, equality,” Regan said. “This is a great day for EPA. This is going to be an excellent month for our LGBTQ+ community.”

Andrew Reighart, a headquarters co-chair of Equality EPA, the agency’s LGBTQ+ employee group, was pleased that the flag was being raised at headquarters.

“I’m incredibly grateful to the administration and to Administrator Reagan for deciding to take that step in public recognition of this important day and the beginning of this important month,” Reighart, who is also a policy analyst in EPA’s Clean Air Markets Division, said in an interview with E&E News.

In an internal email obtained by E&E News, Regan invited EPA staff to attend the event. The administrator said too many LGBTQ+ Americans continue to face discrimination and hate.

“No one should face discrimination or harassment because of who they are or whom they love,” Regan said in the email sent yesterday.

“By flying the pride flag, EPA is letting LGBTQ+ employees know that they are seen, that their contributions are valued, and that the agency is standing for them,” Kevin Minoli, who served as EPA’s acting general counsel, told E&E News. “It will be a powerful moment.”

Minoli, now a partner at law firm Alston & Bird LLP, also served as the executive sponsor of Equality EPA when at the agency. He noted the federal government has a long history of discriminating against its LGBTQ+ employees, from the “lavender scare” that went after civil servants suspected of homosexuality to “don’t ask, don’t tell” and the ban against transgender military service members.

But EPA has been a place where the community has come together. During the 1980s, gay men employed at the agency gathered to talk about the devastating impact of AIDS, Minoli recalled to E&E News. The group called themselves the Southwest Men’s Bible Study Group so not to attract unwanted attention.

Karen Kellen, who served as an EPA Region 8 attorney in the Denver office, remembered forming an LGBTQ+ employee group there, with similar fledgling groups in headquarters and other regions. That would evolve into “an active and engaged group” that helped shape EPA policy around LGBTQ+ issues.

“Our first real policy document was ‘Sexual Orientation and Parental Status Discrimination Policy,'” Kellen, who retired from EPA and is now an adjunct professor at the University of Denver, told E&E News. “It really helped to have the parental status part to get it through. We had groups in all the regions and HQ and regular calls and national meetings to help build the structure and acceptance.”

She added, “Progress was not always smooth, and it could be challenging in some administrations, but we generally kept moving forward because of the support of career management allies at all levels.”

EPA has been at the forefront among agencies in supporting LGBTQ+ rights.

Current White House climate adviser Gina McCarthy signed an order to protect EPA’s transgender and gender-nonconforming staff when she served as EPA administrator under former President Barack Obama. She said in an email at the time it was important for the agency to be “diverse, inclusive and welcoming for all employees” (E&E News PM, June 15, 2016).

Other EPA administrators, like Andrew Wheeler and Regan, have sent memos to employees saying the agency would not tolerate discrimination, including on gender identity and sexual orientation.

Reighart said the agency has been willing to make statements about anti-harassment and nondiscrimination as well as support transgender employees transitioning in the workplace.

“That is the culture at EPA,” Reighart said. “For the time I’ve been here, it seems like we’ve always been one of the more forward-thinking agencies.”

EPA employees have spoken up when programs related to race and sex have been targeted by leadership at the agency.

In 2020, former President Donald Trump issued an executive order going after diversity training, leading EPA and other agencies to pull back on certain events. Staff in EPA’s Office of General Counsel responded with a letter pushing back against that order (Greenwire, Nov. 3, 2020).

“We are committed to creating a work environment where all people are valued, respected, and treated fairly and equitably no matter their race, position, gender identity, sexual orientation or other aspect of identity,” the letter said.

President Joe Biden issued his own executive order on his first day in office revoking that Trump order. Biden also signed another order on that day prohibiting discrimination based on gender identity and sexual orientation.

The Biden administration has been vocal in its support of LGBTQ+ rights, with other agencies raising the pride flag for the first time. The Department of Energy did so last year (Energywire, June 3, 2021).

Showing that support is “a huge morale boost” for federal employees, Reighart said, adding EPA staff working in the agency’s regional offices are going to be impacted by efforts in state legislatures and the courts targeting transgender people.

“Having the administration and the administrator making these declarations and these symbolic gestures are critically important,” Reighart said. “We are also very focused on the concrete policy actions being taken to bolster our community.”