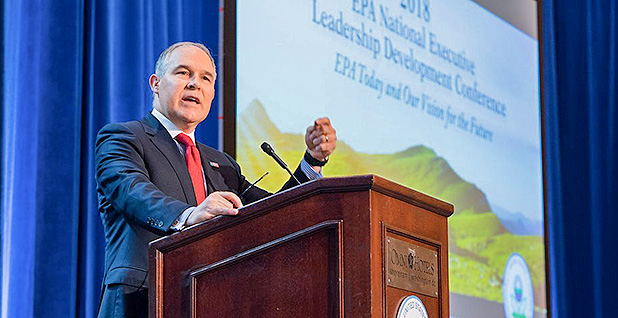 U.S. EPA has revised its page about hydraulic fracturing and oil and gas production.

But there are other changes throughout the page.

EPA Administrator Scott Pruitt is a booster of oil and gas, and he’s taken a personal interest in what’s on the agency website. But the problems with production cited by the Obama administration remain listed on the new webpage. Those include water contamination from spills, leaks from poor well construction and air pollution, including the release of greenhouse gases.

Also, a box offering a way to report environmental violations remains at the top of the page.

But there are a few signs of a more favorable attitude toward drilling. In promoting EPA’s role in protecting public health and the environment, the new page adds text about "the economic prosperity from unconventional oil and natural gas extraction."

The new page also has fewer references to "hydraulic fracturing" that use the term to describe the whole oil and gas production process. That use of the term is more common among environmental groups and other critics of production. The oil and gas industry and its supporters tend to refer to "fracking" as simply one part of the extended development process.

Industry groups preferred the preliminary finding in a draft study saying that fracturing did not cause "widespread, systemic" problems with drinking water. But those words don’t appear on the new page (Energywire, Dec. 13, 2016).

The Trump administration’s changes to federal agencies have been closely tracked by environmental and good-government groups because of administration appointees’ close relationship to industry and rejection of mainstream climate science.

A study released earlier this month showed that thousands of webpages with climate change information have been removed or buried at agencies including EPA, the Interior and Energy departments, and elsewhere across the government (Climatewire, Jan. 10).

The study from the watchdog group Environmental Data & Governance Initiative tracked a year of editing of government websites and has found a drastic overhaul of public information on climate change during the Trump administration. Information that has been removed or buried includes research such as climate mitigation strategies for cities and states, a student’s guide to climate change, and the benefits of renewable energy.

Files obtained by the Environmental Defense Fund and recently released outline that Pruitt made specific requests about sites involving the Obama administration’s Clean Power Plan (Greenwire, Jan. 29). The files list webpages related to climate change that EPA removed or modified last April. EDF found that more than 700 webpages and 1,200 files, such as PDFs, were removed.