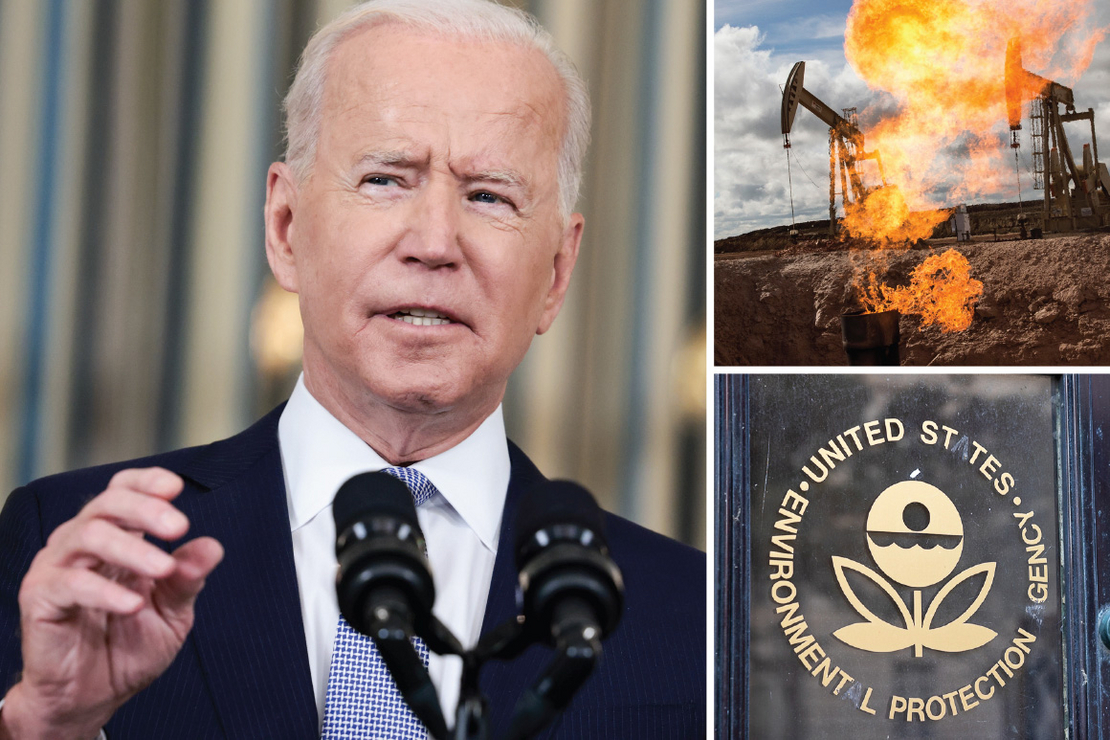 EPA’s proposed methane rules could be the next target for legal opponents of the Biden administration’s approach to estimating the value of curbing greenhouse gases.

The proposal would place limits on methane emissions from new and existing sources in the oil and gas sector, as part of a multiagency rule package targeting the potent greenhouse gas. The rules are among the first to use the Biden team’s interim social cost of methane calculation, which puts a dollar value on the emissions of a metric ton of the heat-trapping gas.

Republican-led states have already attempted to challenge the Biden administration’s decision to ditch the Trump-era social cost of carbon, a closely related metric, but Judge Audrey Fleissig of the U.S. District Court for the Eastern District of Missouri this summer rebuffed their lawsuit as premature.

A new lawsuit opposing EPA’s methane rules is "certainly something that we will look into as we move forward with our appeal on the Social Cost of Greenhouse Gases case," Chris Nuelle, a spokesperson for Missouri Attorney General Eric Schmitt (R), wrote in an email.

The challenge led by Schmitt is currently on appeal after Fleissig, an Obama appointee, said that the states didn’t have grounds to sue over Biden’s metric before it even appeared in any regulations (Greenwire, Aug. 31).

A similar lawsuit led by Louisiana Attorney General Jeff Landry (R) is scheduled for a hearing next month in another federal district court.

At issue in the states’ challenges is a metric that is used in cost-benefit analyses that federal agencies draw up to support major rules they write. A higher estimate of the value of controlling carbon, methane or another greenhouse gas helps federal agencies make a stronger case for stricter rules on regulated industries.

The Biden team’s interim number is a slightly updated version of an Obama-era metric that has been upheld in the courts, legal experts note. An interagency working group is expected to announce the Biden administration’s final value next year.

Some legal and regulatory experts are skeptical that EPA’s methane rules — once they are finalized — could be the best path for the red states to reinvigorate their challenge to the Biden administration’s emissions metric.

"I don’t think EPA would have much to worry about on the social cost of greenhouse gases front," said Richard Revesz, a law professor and director of New York University’s Institute for Policy Integrity.

But he noted that any EPA rule of "any consequence" is going to be challenged in court.

States or industry groups may have a difficult time establishing harm from the use of the Biden administration’s metric in regulatory cost-benefit analyses, said Richard Newell, president and CEO of Resources for the Future.

"While it is an important ingredient in the impact analysis that EPA has done to evaluate the benefits and costs of the proposed rule, the value itself is not determinative in setting the stringency of the actions," he said.

If groups were to say the Biden administration’s use of the social cost of methane was not legitimate, they would probably have to sue in the context of the agency’s analysis, said Andres Restrepo, a senior attorney at the Sierra Club.

"It’s a less of an obvious question, whether a regulatory impact analysis at the agency does impart procedural rights that are afforded by the [National Environmental Policy Act], whether that can afford standing," he said.

Under the standing doctrine, a court can scrap lawsuits in their early stages if it finds that a legal challenger has not presented a concrete harm eligible for judicial review.

Any suit on the social cost of methane would likely come down to a fight over whether the inputs into the metric were reasonable, said Mark Barron, a partner at the firm BakerHostetler.

The conflict would be over the government’s accounting of "the potential ecological and economic impacts of the [greenhouse gas] emissions," he said. "On the other side, industry folks and states are going to say, ‘Do the inputs properly account for the economic and societal benefits of energy production?’"

Barron noted that administrations have come up with vastly different values for greenhouse gases, depending on the parameters federal officials set in the calculation.

‘It’s not even close’

EPA appears to have a strong defense for the cost-benefit calculation behind its proposed methane rules because the agency’s predictions of future benefits are so high, said Newell of Resources for the Future.

The agency had found that the net climate benefits alone of its proposed methane rules for new and existing sources would be $48 billion — meaning the benefits outweighed the costs at a margin of 7-to-1, he said.

"One could imagine if it was close, that might be a basis for questioning the level of stringency of the rule," Newell said. "But it’s not even close."

That value leaves out co-benefits of the rule, or additional reductions in ozone, fine particulate and hazardous air pollutants not directly targeted by EPA’s regulation, Newell added.

EPA’s move is noteworthy because the agency has faced criticism in the past for focusing on indirect benefits.

"It looks like EPA and this regulatory impact analysis doesn’t even include those kinds of benefits, and it’s still a 7-to-1 ratio of benefits to costs," Newell said.

But the actual mathematical outcome is not the key issue from the legal perspective, said Barron of BakerHostetler.

"If the administration wants the use of the protocol upheld, they’re going to have to demonstrate that they have adequately explained why they chose to use this as opposed to alternative methods in the record," he said.

The Biden administration could defend its metric by pointing to the wide use of the social cost of greenhouse gases in a variety of agency rules issued under the Obama administration.

"There is a rigorous foundation for the interagency value of the social cost of methane," said Rosalie Winn, a senior attorney with the Environmental Defense Fund.

In a ruling last year, Judge Yvonne Gonzalez Rogers of the U.S. District Court for the Northern District of California faulted the Trump administration for gutting an Obama-era Bureau of Land Management rule governing methane emissions from existing oil and gas infrastructure on public lands.

The judge, an Obama appointee, said that the Trump team’s shift from a global to a domestic social cost metric had been arbitrary and capricious.

Obama’s metric has also faced some trouble in court.

After Rogers of the federal court in California struck down the Trump BLM methane rule, red states and industry groups revived their challenge to the underlying Obama regulation in the U.S. District Court for the District of Wyoming.

Chief Judge Scott Skavdahl of that court found that EPA had acted arbitrarily when it used global emissions to calculate the cost of methane. BLM’s rule was designed to prevent waste from the oil and gas sector on public lands, but it only resulted in a net benefit when the social cost of methane was considered in the analysis, he said.

"[T]aking at face value BLM’s assertion that the Rule aims ‘to reduce waste of natural gas,’ the cost-benefit analysis should have been considered primarily in terms of waste prevention and not greenhouse gas emissions," wrote the judge, an Obama appointee (Energywire, Oct. 9, 2020).

The Biden administration has said that it plans to release a new version of the BLM methane rule.

In a 2014 case, the 7th U.S. Circuit Court of Appeals upheld the Obama administration’s use of a globally focused social cost of carbon in a challenge to the Energy Department’s efficiency standards for commercial refrigeration equipment.

"We think that EPA has a very strong basis for using the social cost of carbon and methane methodology that the Biden administration has recently adopted," said Restrepo of the Sierra Club.

"It wouldn’t be rational not to use an international one," he added. "We think that’s the only reasonable one to use for many reasons."