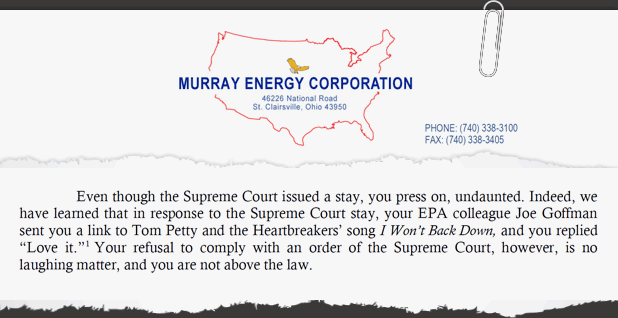 The Obama administration submitted a recently finalized portion of the Clean Power Plan last night to the Office of Management and Budget for interagency review.

The move will likely spur complaints from opponents of the climate regulation that U.S. EPA is violating a Supreme Court order from February halting implementation of the rule.

EPA cannot require states to plan for the rule, which would not begin until at least 2022. But the agency argues it can continue work, including finishing model carbon-trading rules that would serve as a federal plan for states that don’t write their own.

"Many states have asked EPA to move forward with our outreach and to continue providing support and developing tools related to the Clean Power Plan, including the model trading rules and Clean Energy Incentive Program (CEIP)," said EPA spokeswoman Melissa Harrison in an emailed statement. "We are developing these tools in a way that is consistent with the Supreme Court’s stay of the Clean Power Plan."

Harrison added that "even for states that are choosing not to act during the period of the stay, these tools will assist their decisions regarding options for plan development when the stay is lifted."

Bill Becker, who heads the National Association of Clean Air Agencies, which represents states that must implement the rule, said those still planning "welcome the technical and legal support."

Murray argues that when the Supreme Court granted the stay, it simultaneously agreed to all the requests of the petitioners that EPA stop working on the rule. EPA has countered that that’s not true and that a stay is not as strong as an injunction.

Legal challengers will probably have the same reaction to EPA’s work on the model trading rules, although states have said they would be helpful in their thinking about how to comply with the power-sector carbon standards if the Clean Power Plan moves forward.

Almost all states and electric utilities would like to use carbon trading under the rule. In a carbon-trading system, a company that falls short of its standards could purchase allowance from companies that cut more carbon than they need to in order to comply. Carbon trading is likely the simplest and least expensive way to meet the rule’s goals, according to modeling.

EPA explained the model trading rules "provide a pathway to adopt a trading system supported by EPA and make it easy for states and power plants to use emissions trading."