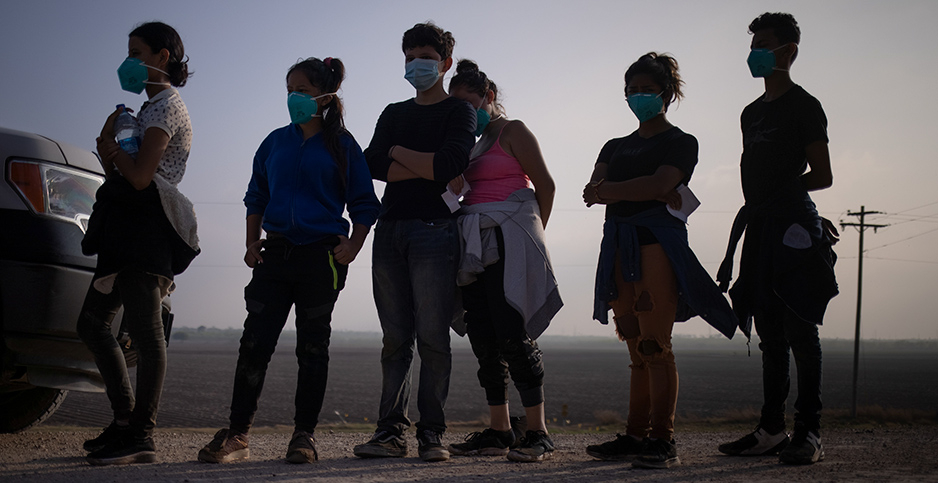 Unaccompanied minors from Central America lining up to be processed by U.S. Border Patrol agents after crossing the Rio Grande river into the United States from Mexico on a raft. Adrees Latif/REUTERS/Newscom

EPA Administrator Michael Regan is encouraging agency employees to volunteer to assist the growing number of unaccompanied minors along the southern border, a move that some hope will spur action on toxic sites at immigration facilities.

So far, more than 100 EPA employees have agreed to up to four-month stints at facilities in Texas, Arizona or other border regions. An initial group already left, and others leave Sunday. It’s part of a governmentwide push to deploy federal workers to help the Department of Health and Human Services process the thousands of undocumented children who have entered the country without a parent.

"Today, I am writing to encourage you, our exceptional public servants, to support this humanitarian effort," Regan wrote in a staffwide email last night. "The situation is critical, and help is needed immediately from our federal family."

The job entails working with migrant children and other federal entities, according to another recent staff email from Dan Utech, the agency’s chief of staff. Spanish proficiency is preferred, he said.

Ironically, the deployment of EPA employees comes as reporting in Grist and other news outlets shows that detention centers are located on or near toxic sites or have other environmental violations. Many of the centers are on military bases known to be contaminated from past operations or unexploded materials. In fact, EPA lists 130 military bases as Superfund priorities.

Now environmentalists hope EPA volunteers will draw on their expertise to sound the alarm about offenses that may have gone unnoticed.

"I think it’s very good for EPA staff who know environmental law to see firsthand what is happening in these facilities," said Raul Garcia, an attorney at Earthjustice, which has tracked dozens of hazards at potential facilities in Texas, Florida and elsewhere. "I hope it doesn’t stop there. I hope they take back what they see, what they smell and what they touch and act upon it with their jurisdiction."

One site, Fort Bliss, is a military base in El Paso that has the ability to hold up to 7,500 children and, according to an Earthjustice investigation, has at least 80 contaminated sites — including 18 landfills, three fire training areas, 27 oil pit sites and six detonation areas.

Usually, the children are at the processing center for just a short time, Garcia said, but even a temporary stay can cause health problems for kids with asthma or other conditions.

This week, White House press secretary Jen Psaki addressed the issue of unaccompanied minors generally, saying the president is focused on "opening up additional facilities, which we have done a great deal of in the last couple of weeks." She added they are working to move kids out of the Border Patrol facilities and into shelters "as quickly as possible."

If Immigration and Customs Enforcement detains a minor, the agency has to hand over the child to HHS within a certain time period. They are then placed in a pseudo foster home.

Already, EPA has begun to pursue environmental violations at some detention centers. Last summer, inspectors in the Region 9 office in California showed up for an announced visit at the Adelanto detention center after reports indicated disinfectant sprays were being misused, causing detainees to suffer headaches, nosebleeds and other issues.

The July 2020 inspection report says EPA suspected the GEO Group, a private firm that runs the detention center, was applying HDQ Neutral "in a manner inconsistent with its labeling." The report found several "areas of concern," including that the EPA-registered pesticide was not properly diluted and staff failed to take steps to shield detainees from exposure.

GEO said in a statement to E&E News, "HDQ Neutral is a cleaning product that was in use at the Adelanto ICE Processing Center for nearly 10 years, always in accordance with the manufacturer’s guidelines. During this time, there was no indication of confirmed medical claims associated with the use of HDQ Neutral. HDQ Neutral is also widely used in hospitals, nursing homes, youth centers, and colleges and universities. At the present time, a product other than HDQ is being utilized at the Adelanto ICE Processing Center."

More broadly, Melissa Legge, an attorney at Earthjustice, said she understands the border situation needs to be addressed in a humane and expedient way, adding: "Part of that requires keeping children away from toxic military sites."

Part of the problem is there was little — if any — emphasis placed on the issue under the Trump administration, said Patrice Simms, an Earthjustice attorney who led the EPA transition team.

But now, one EPA staffer who leaves Sunday for training in Irving, Texas, said the new administration has been talking very openly about environmental problems affecting marginalized communities.

"If we become aware of something like that, then I would feed it back to my manager, and I think the others would, too," he said, adding, "I see it as a civic responsibility. I don’t have dependents at home, so I am free to leave for a bit."