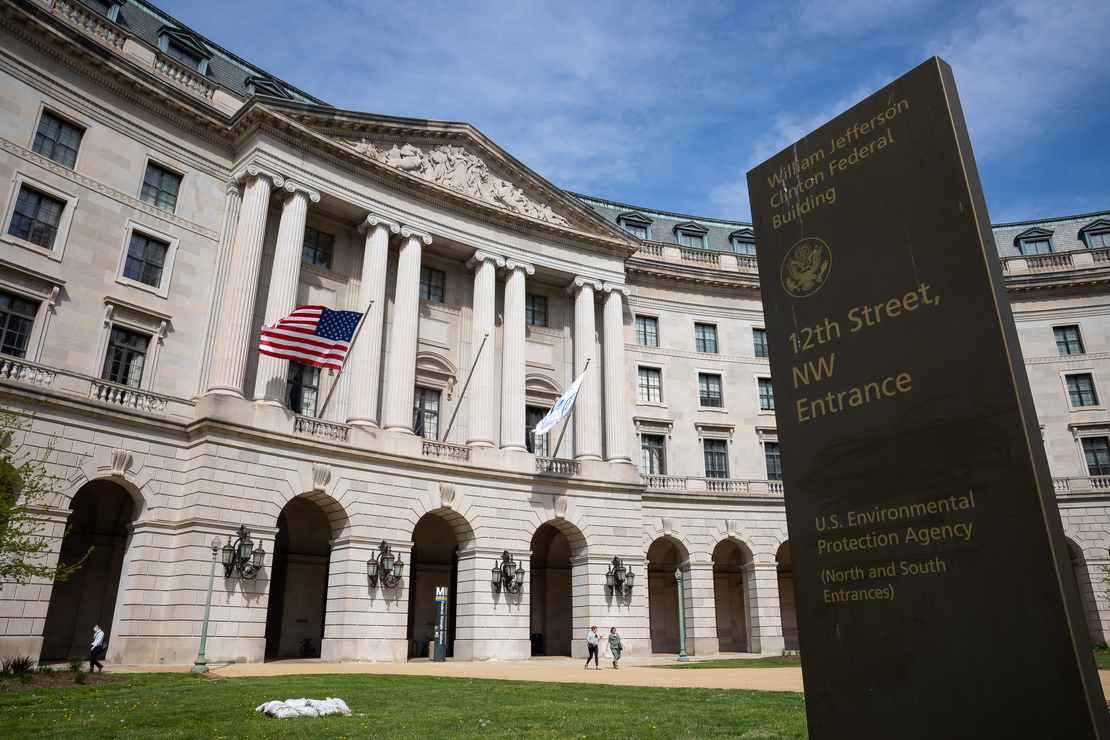 On the plus side, some EPA employees are enjoying therapy dogs and getting “caught up on NPR.” On the downside, it feels “like camping” and there are rodents to deal with.

EPA staffers have mixed reviews as they trickle back into the office more than two years into the Covid-19 pandemic. EPA has embarked on a novel “hybrid” plan that will have some staff back at their office desks for part of the workweek. Others will never come back, having been approved by the agency to work from home permanently.

This week and last week saw the return of EPA’s bargaining unit employees to the office while managers, senior officials and political appointees went back months before. EPA employees, several of whom were granted anonymity to speak freely, told E&E News they found being back a strange experience — delight in seeing colleagues in person jumbled with concern over the lingering virus.

One EPA employee noted the adjustment to in-office interruptions, such as when a virtual meeting is going on, then someone knocks on the office door and the phone rings. Also, with continued telework, one has to remember to bring their work home when need be.

“It’s like camping,” they said. “You have to pack up, arrive, unpack, then pack up again.”

Some EPA employees said they saw banners welcoming them back and were offered doughnuts and coffee upon their return. Also, therapy dogs with their handlers were outside EPA headquarters available for staff to pet this week, according to photos shared with E&E News.

One EPA staffer came across unwelcomed guests in their desk.

“I had mice in my drawers and had to get the cleaning crew to disinfect,” an EPA employee said, who also made sure to wear their “comfiest outfit and shoes” after working from home in slippers.

Others were not pleased to return to the office.

Brian Kelly, vice president at American Federation of Government Employees Local 704, which represents EPA Region 5 employees, said he has been in the field helping to clean up Superfund sites and received positive reviews from management during the pandemic. But he was frustrated he had to report to a cubicle to review reports and answer emails.

“I could have done the same thing working remotely, minus the wasted gas, greenhouse emissions and commuting aggravation,” said Kelly, who works as an on-scene coordinator out of EPA’s Ann Arbor, Mich., office. “On the positive side, I got caught up on NPR.”

Another EPA employee said it was “kinda weird” to see portraits of President Joe Biden and Vice President Kamala Harris when entering agency buildings. EPA staff were sent home in March 2020 to avoid exposure to the virus, when Donald Trump was still president.

“I feel a bit bad for the EPA employees who have been hired since the pandemic began,” the employee said. “Their work experience thus far has been so different from the one that I’ve had over the years, when working together in the same space made it much easier to get to know one another.”

The agency operates differently on its hybrid plan, with some employees working inside the office and others outside of it every day.

A video on EPA’s YouTube channel gave tips and tricks for returning to the office, including to pack lunch to stow in the office refrigerator, and showed a “hybrid meeting” with policy staff — some but not all were masked, while others beamed in from a video screen on the wall. Chris Frey, a top official in EPA’s research office, also touted hybrid work, sharing a picture of his “deputy special assistant” and pet cat, Merlin, in the video.

In another video posted in March, EPA Deputy Administrator Janet McCabe said she would put on a mask if someone came to her office wearing one and wouldn’t ask why someone was joining a meeting over Microsoft Teams instead of in person. She wanted to respect people’s choices in this new work environment.

“The experts and the literature have both said that hybrid is the hardest, and I know we will have bumps along the way,” McCabe said in the video. “I know we can adapt, learn as we go and be kind to one another as we get used to new ways of doing our work together.”

EPA spokesperson Tim Carroll told E&E News over 10,000 EPA bargaining unit employees were to return to the office this week and last.

“Though the agency is not keeping count, we expect the majority of those employees to return at least one day during this period,” Carroll said.

‘Building our future of work together’

EPA Administrator Michael Regan noted “there is a range of emotions right now, from enthusiasm to concern” in an email last week welcoming back employees.

“From wearing our masks when doing so is requested, required, or respectful, to leading inclusive hybrid meetings, to taking the chance to say ‘hello’ to someone new, I am looking forward to building our future of work together,” Regan said.

EPA is following the latest CDC guidance for Covid-19 safety protocols, meaning masks are optional in the agency’s Washington headquarters as well as its 10 regional offices. In turn, not everyone is wearing masks in the workplace, employees said.

The agency has reported high vaccination rates against the virus among its staff and has encouraged boosters (Greenwire, Jan. 7). Some EPA employees told E&E News they were considering getting a second booster shot before returning to the office.

EPA is seeking to measure its employees’ sentiments about the office return. The agency has asked staff to participate in “snapshot surveys” to track how things are faring under the hybrid plan.

In preparation for the office return, EPA revamped its video conferencing systems to help ease staff into hybrid meetings and hosted a conversation with staff on safety plans. McCabe has also sent several emails updating staff about return-to-office plans.

Still, the pandemic is not over, not even at EPA. Agency staff say they continue to receive notices of infections in the office, including a notification last week that a visitor to EPA headquarters tested positive for Covid-19.

Some staff said they were uncomfortable returning to the office with the virus still out there.

“I consider myself very fortunate to have avoided infection so far, and I would really like to keep it that way,” one EPA employee said.

Some have not yet returned to their EPA office — and they don’t know when they will.

In February, EPA Region 4 was notified of “a rodent problem” in its Atlanta office, according to an email sent to staff. A subsequent email laid out a five-phase plan to clean up the space, which didn’t include specific timelines because the agency hadn’t hired a “pest management contractor.”

Phase 5 of that plan has EPA employees return to the Atlanta office but “specific dates and building entry details” remain to be determined by the agency and senior management in Region 4, the email said.

Dianna Myers, president of AFGE Local 534, which represents EPA Region 4 employees, told E&E News the rodents have to be dealt with before staff return to the office.

“AFGE Local 534 doesn’t want any employee returning to the office space until that space is cleaned, sanitized and rodent free,” Myers said. “Emphasis on rodent free.”

“At this time, we do not have specific timelines or a cost estimate, as we are working through the contracting process to procure the pest management contractor and negotiate completion milestones,” Jenkins said. “EPA is working diligently to ensure a safe and clean return to the EPA workspace.”

Others at the agency have not set a date for their return, like staff at EPA’s Office of Inspector General.

EPA employees’ return to the office will slowly ramp up in the coming weeks.

Staff in AFGE’s bargaining unit at EPA are required to come to the workplace just one day this pay period under an agreement between the agency and the union. That increases by a day each following period until the fourth pay period when “normal” schedules resume. Employees can also apply for telework and remote work.

Carroll with EPA said the agency’s other unions have the same staggered return schedule and flexibility as AFGE does.

Some EPA employees said their remote work requests have been granted. Union officials, however, say there have been delays and denials. They have filed grievances to move those applications along.

“It’s frustrating for people. It’s a cause of great stress,” said Marie Owens Powell, president of AFGE Council 238, EPA’s largest union, which represents about 7,500 employees. “It seems a lot of [denials] have not been justified so there will be an avalanche of grievances.”

Nicole Cantello, president of AFGE Local 704, told E&E News her union has already filed five grievances for EPA employees who had their requests for remote work rejected by the agency.

Carroll, the agency spokesperson, said EPA has granted over 70 percent of remote work requests and applications have been processed. At least 900 EPA employees have been approved for remote work so far, he said.

Carroll added that EPA’s current telework policy for non-bargaining-unit members as well as agreements with its unions allow for up to 80 percent telework.

AFGE is also pushing for EPA staff to have carbon dioxide monitors to help gauge ventilation inside the office. The agency is not providing those yet, but local union affiliates may buy what they need, with some of those costs reimbursed by the council, Powell said.

“We are trying to establish a very low-cost, low-tech way to assure employee that there is adequate ventilation in the building,” Joyce Howell, executive vice president of AFGE Council 238, told E&E News.

AFGE and EPA are going before the Federal Service Impasses Panel next month to find a resolution on the monitors for agency employees, Howell said.

Those monitors might come in handy. Several EPA employees said at EPA headquarters, windows in their offices are sealed shut and they are not permitted to open them.

“The agency has an obligation under the various safety agreements to disclose information about HVAC, but it is far from ideal,” said Allison Hoppe, the National Treasury Employees Union representative to EPA’s labor Covid-19 coalition.

NTEU now has agreements on health and safety as well as telework policy in place with EPA over its return-to-office plans. The bargaining between the two has been bumpy, and NTEU was not among EPA’s other unions when the agency announced a return date in March (E&E News PM, March 10).

“Our hope is the agency acts as an actual partner during the implementation of the agreements because the status quo is frankly chaos,” Hoppe said. “Staff and managers are both completely lost by what they’re supposed to be abiding by right now.”

Carroll with EPA said the agency was happy to reach an agreement with NTEU, which is similar to other unions’ deals and “ensures a gradual and safe physical return process for employees.”

Regarding ventilation, EPA has upgraded air filters and increased outside air in its HVAC systems. “Most facilities have MERV13 filters installed,” Carroll said.

EPA has stressed that it is learning as it goes under its hybrid plan. In an interview with E&E News this week, McCabe said she has visited with agency staff in the office and “everybody just seemed really happy to be back.”

“I think people like the idea of: I like to be back, but I also like to know that I’m not coming in every day,” McCabe said. “I kind of like that too. I telework one day a week. And that’s nice.”