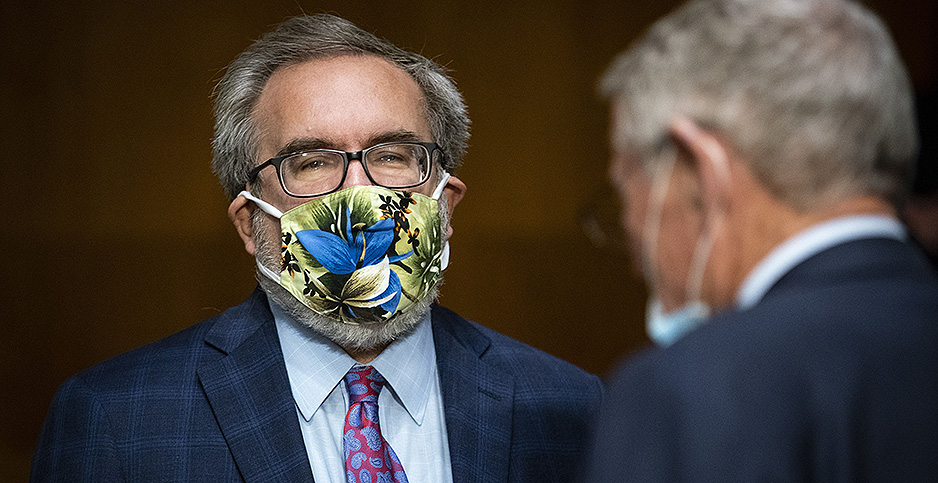 Andrew Wheeler, administrator of EPA, wears a face mask as he arrives Wednesday during a Senate Environment and Public Works Committee hearing on Capitol Hill in Washington. Al Drago/CNP/AdMedia/SIPA/Newscom

EPA has begun the slow process of reopening offices despite its employees’ worries about potential exposure to COVID-19, the disease caused by the novel coronavirus.

EPA Administrator Andrew Wheeler told staff yesterday in an internal email obtained by E&E News that the agency has decided to reopen its Region 4 office in Atlanta; Region 7 in Lenexa, Kan.; and Region 10 in Seattle.

EPA closed its Region 4 office Wednesday and Region 7 and 10 yesterday. Those offices will remain closed for seven days so the coronavirus is rendered inactive, Wheeler said. The next step will be for those locations to begin "Phase 1," a limited reopening that would bring staff back in phases to the workplace with social distancing restrictions, after an additional review of the data on the virus’s spread.

Wheeler stressed that the staff’s health and safety was paramount and EPA’s reopening would be done in alignment with the White House’s reopening guidelines in response to the virus.

"Our plan for an eventual phased return to EPA offices will take a measured and deliberate approach that ensures your health and safety," Wheeler said in the email, noting the agency’s plan "provides for a ‘rolling reopening,’ so each facility will enter Phase 1 according to local data and conditions."

Still, most employees in Regions 4, 7 and 10 are expecting to be teleworking during the coming weeks as EPA implements the three-phased plan.

"Be good to yourselves and please take the time you need to protect and promote YOUR health," Wheeler emphasized. "Stay safe, well, and strong. We need you — our employees are EPA’s most important asset."

Union officials at EPA were angered by the plans to reopen, saying it was too soon, given COVID-19 is still prevalent throughout the country.

"My employees are scared and terrified because the agency doesn’t have a plan, is not being transparent about their plan and don’t seem to care about their employees’ health and safety," Davis said.

She added, "One terrifying thing for my clerical staff is that they have open cubicles.

"How are we going to protect them with no masks, just asking people to stay 6 feet apart?" Davis said, who added her union has pushed for protections like glass partitions in the workplace.

Others at the agency expressed anxiety, too.

Lisa Hanlon, president of National Treasury Employees Union Chapter 294, which represents EPA Region 7 employees, said staff in her office knew the cafeteria would be closed and conference rooms restricted as the workplace reopened.

"There is some concern as we slowly enter the workplace with the safety measures," Hanlon said, adding, "We are going to be slowly reopening. They are doing this in a measured and responsible way."

One EPA Region 10 employee, however, said they weren’t worried about reopening.

"We have been told they are in a seven-day closure period where they will deep clean all the spaces. No one knows exactly what that entails, however," said the employee.

An EPA spokeswoman told E&E News that as facilities reopen, it will be done in three phases, with employees being encouraged to telework during the first two phases. Under the White House reopening guidelines, "Phase 3" for employers is when "unrestricted staffing" is expected to resume at the workplace.

"EPA will begin the process of reoccupying its facilities in a deliberative manner that ensures the health and safety of our employees. Senior leadership will review the data we gather from [the Centers for Disease Control and Prevention], and we will consider state and local guidance before making any decisions," said the agency spokeswoman.

Wheeler, too, has touted the EPA staff’s ability to function outside of the office. "Through the amazing work of our IT office, we more than doubled our capacity to telework within one week," said the EPA administrator during testimony before the Senate Environment and Public Works Committee earlier this week.

Like the rest of the country, EPA has been affected by the pandemic. The EPA spokeswoman said today the agency has been notified of 40 coronavirus cases among its employees nationwide. One EPA Region 3 employee has died from the virus, too (Greenwire, April 2).

Other agencies have begun a phased reopening as well. The Department of Energy has released a plan that will limit interaction among employees, who will be encouraged to wear masks (Energywire, May 19).

Union officials at EPA lamented that they haven’t seen a similar plan from their management.

"We do not have a plan on paper in place," Davis said. "We have nothing."

"They have not shared a plan with us. That has caused a concern for us," Hanlon said. "I have not seen it. Nobody has seen it."

The EPA spokeswoman said the agency’s reopening plan will soon be released.

"We do have a reopening plan that has been reviewed by leadership at headquarters and by regional leadership that will be released early next week," she said.

Unions have pushed for strong precautions as EPA reopens.

In a letter to Wheeler earlier this month, NTEU President Tony Reardon said his union wanted to discuss offering COVID-19 testing to employees and practicing screening measures, like taking temperatures at the office. Nevertheless, EPA staff will likely be on their own.

"From what we understand, no one is providing anyone with [personal protective equipment] or tests," Hanlon said, noting NTEU will be providing members with reusable masks.

The EPA Region 10 employee also said, "We have not been provided with a reopening plan or any details, including whether we get PPE."