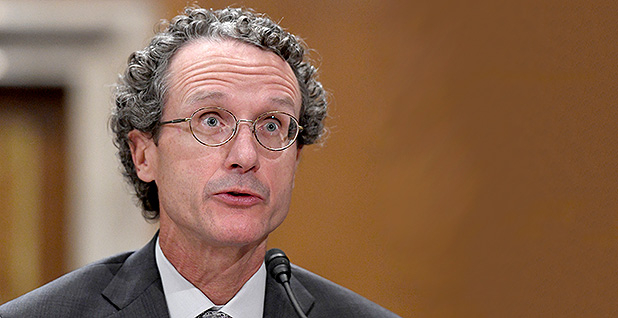 ORLANDO, Fla. — EPA’s air chief today said the Trump administration has not made a decision on what to do with Obama-era standards limiting mercury and other air toxics emissions from power plants.

Speaking here at an annual environmental law conference, Bill Wehrum said EPA is in an "interesting situation" where industry would like to see the rule revoked, but it’s already spent a lot of money in compliance.

"Under the law, there are good reasons why the standard shouldn’t exist because it’s not appropriate and necessary," he said. "But on the other hand, we cannot turn a blind eye toward the practical, the implications of the possibility of rescinding the rule and the uncertainty that that would cause within the regulated community."

Twenty-one states, as well as business and industry groups, sued, and in 2015 the Supreme Court found that EPA had not adequately considered costs when deciding to regulate toxic emissions from power plants. Justices remanded the rule back to EPA.

EPA projected the standards would annually cost $9.6 billion, making them among the most expensive air rules ever. But the agency found the costs were far outweighed by benefits of between $37 billion and $90 billion a year.

Litigation over the supplemental finding was pending when the Trump administration took office. In April 2017, the U.S. Court of Appeals for the District of Columbia Circuit agreed to indefinitely postpone the proceedings to allow the new administration time to figure out what to do.

"We’re still thinking about it. We haven’t quite figured out what we’re going to do," said Wehrum, who formerly led the EPA air office in an acting position during the George W. Bush administration. He was sworn in as Trump air chief in November.

He called the Obama-era standards "very stringent" and said the Supreme Court’s remand gives EPA "an opportunity to think about it again and maybe get a different result." Reconsidering the finding that the rules are appropriate in light of their costs could provide grounds to "eliminate this regulation," he said.

But Wehrum noted the rule became effective several years ago and said some power plants have shut down "in large part" because of its requirements. Others have spent money installing scrubbers and other mercury control equipment.

"So what we hear from the industry is, however satisfied they’d be to go back and decide this rule maybe isn’t necessary after all," Wehrum said, "the reality is, the bell has been rung, and if you make the regulation go away, you can’t make the cost that occurred go away at this point."

It’s unclear when EPA may make a decision on the MATS supplemental. Wehrum said, though, that MATS ranked among his top priorities.

He also listed taking a "hard look" at the Clean Power Plan, methane standards for the oil and gas industry, the 2015 ozone standard, air permitting, and greenhouse gas standards for cars and trucks.

At the same conference today, Matt Leopold, EPA’s top lawyer, praised the courts for being willing to give the agency time to reconsider prior rules by postponing litigation, such as in the MATS case. Judges have similarly delayed lawsuits over the Clean Power Plan and the methane standards.

"One of the things that I think surprised me to some extent as I came into the role, and looking to the prior year at EPA, is the space the courts have given us honestly to change the rulemaking," he said. "Many cases have been held in abeyance."

He acknowledged, though, that EPA has lost several lawsuits over decisions to delay the effective dates of Obama-era regulations, including for the methane standards.

But he said the U.S. District Court for the District of Columbia’s decision yesterday to dismiss litigation by greens and blue states over EPA’s decision to delay toxic discharge standards for power plants was a "victory."

Judge Dabney Friedrich, a Trump appointee, found that the lawsuit was moot since EPA had withdrawn an initial indefinite stay of the standards (E&E News PM, April 18).

"This was a good decision for EPA," Leopold said.

Leopold, whom the Senate confirmed as general counsel in December on a voice vote, said the administration’s goal was long-term and viable environmental policy.

"We’ve seen a massive swing in the pendulum of environmental policy from one end to the other. And certainly, I think everyone agrees that it was unanticipated," Leopold said.

"But we keep in mind that that pendulum can swing back just as easily. So when we’re writing the rules, we want to ensure we’re well within the bounds of the law."

But Sanjay Narayan, a Sierra Club attorney, pushed back, saying that early legal skirmishes show the courts will push back on the Trump administration’s unprecedented "antagonism" toward public health protection.

"The courts have given EPA quite a lot of leeway in terms of staying litigation, but what we haven’t seen is the administration get much leeway in actually staying the rule itself," he said.