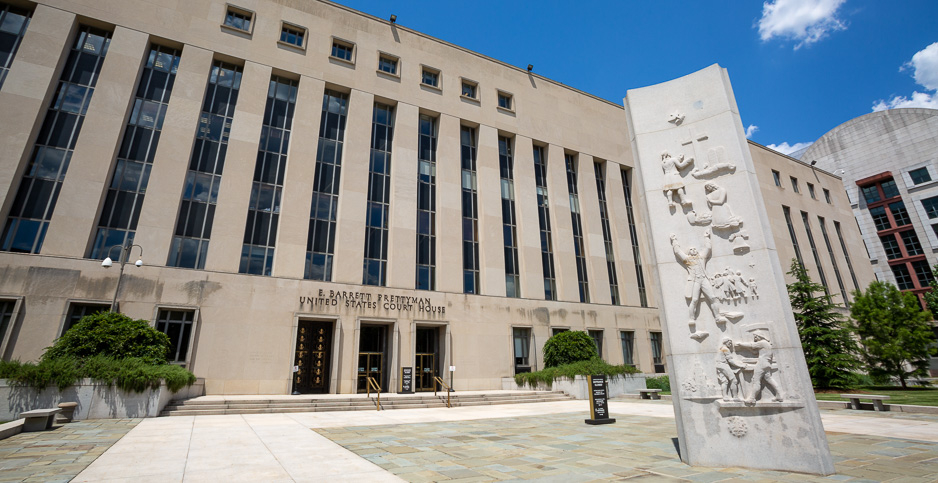 Industry, government and green groups have been waiting more than half a year for two critical court decisions with major implications for EPA’s efforts to address ozone pollution.

The U.S. Court of Appeals for the District of Columbia Circuit has not yet decided the legality of an Obama-era cross-state air pollution rule or a high-stakes fight over ozone standards, both of which were argued in 2018.

A loss in either case would throw a wrench in EPA’s efforts to meet regulatory requirements under the Clean Air Act. Even a narrow ruling could complicate ongoing rulemaking and enforcement.

The D.C. Circuit decides most of its cases from the previous September-May term by the end of summer, meaning the two air cases will likely be decided within the next several weeks.

But the lag time on both is notable. Recent statistics show the D.C. Circuit averages about three months between oral arguments and decisions. The court heard arguments in the cross-state air pollution case almost 10 months ago and in the ozone case more than seven months ago.

"Every Tuesday and Friday, I get a little excited thinking this could be the day," said Earthjustice lawyer Seth Johnson, who argued the ozone case, referring to the days the D.C. Circuit typically hands down opinions.

The rule aims to slash emissions of ozone-causing pollutants in 22 states whose own plans fell short of addressing the 2008 standard of 75 parts per billion. The agency crafted the plan after prolonged litigation, including a trip to the Supreme Court, over a previous approach.

EPA defended itself during Oct. 3 oral arguments from energy companies who claimed the rule was too burdensome and green groups and downwind states who argued it wasn’t strong enough (Greenwire, Oct. 3, 2018).

Nearly 10 months later, the litigants haven’t heard a peep from the three-judge panel that heard the case.

"It will be helpful to be in a place where EPA can proceed and the states can proceed with confidence that we’ve got this line of cases now interpreting this statutory provision, and we know how it’s supported to work and the mechanics," Environmental Defense Fund attorney Graham McCahan said.

EDF is an intervenor in the case.

McCahan noted EPA also needs to get to work on a plan to address cross-state pollution that prevents states from meeting 2015 ozone standards. The rule at issue in the case addresses the 2008 standards.

"To the extent that this is slowing the implementation of the 2015 ozone [standards], then that’s a problem because that’s meaning both dirtier air on the ground," he said, "and then the downwind states from a legal and regulatory and compliance perspective are saying, ‘We’ve got these deadlines to meet this standard, and we’re not getting the help that the statute provides from our upwind neighbors.’"

Despite the uncertainty, EPA is relying on the CSAPR update to fend off "good neighbor" lawsuits alleging it should be doing more to crack down on upwind pollution contributing to compliance problems with the 2008 standard throughout the Northeast.

In response to one legal challenge brought by New York and five other states, for example, EPA lawyers last month wrote "that reductions from the CSAPR update had, in fact, been sufficient to fully resolve upwind states’ Good Neighbor obligations. Thus no additional emission controls were required in upwind states."

An adverse decision from the D.C. Circuit on the legality of the 2016 update could scramble that defense. At New York University’s State Energy & Environmental Impact Center, Deputy Director Elizabeth Klein found it difficult to envision the D.C. Circuit vacating the 2016 rule on the grounds it was overly strict. If that happened, however, she thought the Trump administration would view the development as positive.

"That would mean that they get to unwind the 2016 update and presumably go back to less stringent controls," Klein, who agrees with New York state’s position, said in an interview today.

Likewise, the D.C. Circuit hasn’t resolved a years-in-the-making battle over EPA’s 2015 standards for ozone. The Obama administration marked 70 ppb as the maximum acceptable level of the pollutant under the Clean Air Act. Trump officials then spent more than a year waffling before ultimately deciding to stick with that standard.

In December, the court heard arguments from industry and conservative states complaining the standard was too tough and environmentalists arguing it was weak (Greenwire, Dec. 18, 2018).

Johnson, the Earthjustice lawyer, said the outcome in that case will sway EPA’s current review process for the next round of ozone standards.

"The court’s opinion is going to have important ramifications for that review," he said. "It’s going to tell EPA what it can do, what it can’t do and what it must do."

Institute for Policy Integrity Litigation Director Bethany Davis Noll noted that various other challenges are linked to the 2015 ozone levels, including petitions under Section 126 of the Clean Air Act, which allows states to push EPA to crack down on specific polluters in other states. The institute, also based at NYU, is a sister organization to the State Energy & Environmental Impact Center.

Johnson added the D.C. Circuit is still within the window of time it spent considering litigation over the 2008 ozone standards. That case was heard in November 2012 and decided in July 2013 when the court upheld the 75 ppb threshold.

But even as EPA officials await the D.C. Circuit decision on the thicket of litigation now enveloping the 2015 standards, they are forging ahead with a new fast-track assessment of those limits.

Under the Clean Air Act, ozone is among a half-dozen pollutants for which the agency is supposed to review and, if needed, revise the ambient air quality standards every five years. Historically, EPA has rarely met that timetable. In the Trump administration, scheduling has become paramount.

Under a "back-to-basics" memo issued last year by then-Administrator Scott Pruitt, EPA is supposed to finish the new review of the ozone standards by October 2020. Pruitt set a similarly tight timetable for completion of a separate review of particulate matter standards. Critics note the latter review has already missed the five-year mark and say both deadlines conveniently fall before the end of President Trump’s current term.

But Andrew Wheeler, who now heads EPA, reiterated those goals last week in a letter to an agency advisory committee involved in the reviews (E&E News PM, July 26).

In the letter, Wheeler said he had ordered EPA staff to wrap up a draft report on the latest research on ozone’s health and environmental effects by this October, accompanied by a draft "policy assessment." The simultaneous review of both documents by the advisory committee and the public, Wheeler wrote, "should conclude by the end of the calendar year."