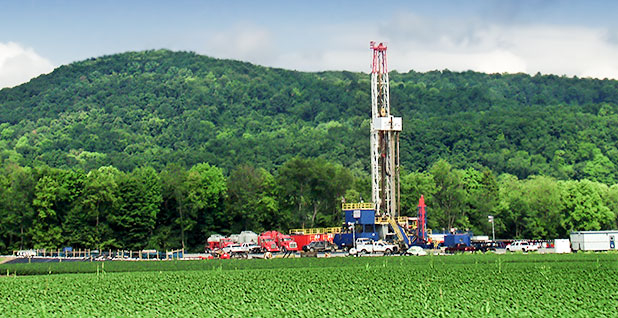 A natural gas well tapping the Marcellus Shale in Pennsylvania. Hydraulic fracturing is a key part of building wells to extract gas from shale formations. An EPA study out today outlines the risks to drinking water from fracturing and related activities. Photo courtesy of Wikipedia.

U.S. EPA today abandoned its contentious assertion that hydraulic fracturing hasn’t caused "widespread, systemic" problems with drinking water as it released the final draft of its study on the practice.

The agency’s multiyear research instead made the less-sweeping conclusion that "hydraulic fracturing activities can impact drinking water resources in the United States under some circumstances."

Burke also said the "widespread, systemic" phrase had caused confusion. "It really did not communicate the findings of the report," he said.

The change from the draft drew swift condemnation from industry groups this morning. The American Petroleum Institute called the change "beyond absurd" and said the Obama administration had decided to "reverse course" on the way out the door.

Environmental groups, which had seethed over the draft conclusion, said the report confirmed their long-standing accusations that oil and gas activity is dangerous.

"We’ve known for years that fracking and other oil and gas activities are a threat to drinking water," said John Noël, national oil and gas campaigns coordinator at Clean Water Action.

The draft, released in June 2015, ran 998 pages. It asserted that fracturing had caused drinking water problems, but attention focused on one sentence: "We did not find evidence that these mechanisms have led to widespread, systemic impacts on drinking water resources."

The final report is 666 pages, with 572 pages of appendices. The phrase "widespread, systemic" does not appear anywhere.

Controversial from the beginning

The word "widespread" appears nine times, but only in the context of how common fracturing has become. "Systemic" appears in the appendices, in a study cited by the scientists.

EPA included the assertion that fracking had not caused "widespread, systemic" problems in its draft after agency leaders met with White House officials to discuss "messaging" (Energywire, Dec. 5).

The lack of problems with fracturing became the lead headline of news stories that followed. The examples of contamination were an addendum.

Energy industry interests praised the draft’s top-line finding. Groups such as API cited it as a clean bill of health for the widely debated drilling process. Environmental groups fumed that the study mistook a lack of data for evidence of safety.

The draft also came under fire from the science advisers. In August, they issued a report saying EPA "did not support quantitatively its conclusion." They wanted more facts to buttress the document’s assessments.

A dissent by four science advisers with industry ties said the language was "accurate" and "supportable with the facts EPA has reviewed."

Congressional Democrats requested the EPA study in 2009. They asked EPA to look into whether hydraulic fracturing harms drinking water.

The research was contentious from the beginning. Early on, drilling critics packed hearing halls for the "scoping" process, while environmental groups and industry lobbied to get their favored scientists on the peer review panel.

The agency tangled with Halliburton Co. about what information the company should hand over, even issuing a subpoena at one point.

The Science Advisory Board also called on the agency to include details of its scuttled groundwater investigations in Dimock, Pa.; Parker County, Texas; and Pavillion, Wyo.

The final study included text boxes on groundwater problems in each of the areas. But they broadly described the uncertainty surrounding the water problems rather than describing the investigations in detail.

In a conference call with reporters, Burke emphasized repeatedly that the decisions on key sentences were made by "EPA scientists," implicitly rejecting inferences that White House officials had ghost-written the line.

He made a point to address the "widespread, systemic" phrase at the beginning of his remarks "to get it out of the way."

Instead of politics or White House interference, he said people should look at the broad scale of information the study described on the risks to groundwater.

The effects studied were not limited to the specific practice of hydraulic fracturing, in which chemical-laced water and sand are forced underground at high pressure to break apart rock and release oil and gas.

Researchers looked at related activities that are a part of constructing an oil and gas well. Burke called it the "water cycle."

The study identified several stages at which water contamination "can be more frequent or severe." Those include withdrawing water from streams or groundwater, particularly during drought conditions; surface spills; and fracking into poorly constructed wells that lack mechanical integrity.

"We did find impacts throughout the cycle," Burke said.

Other risky aspects include injecting fracking fluid directly into groundwater resources, which is most likely to occur during coalbed methane production rather than shale drilling.

Burke also noted that the report does not make any policy recommendation on drilling or fracturing. Instead, it offers information that policymakers themselves can use.

"There is a wealth of information that can guide thinking and progress," Burke said.