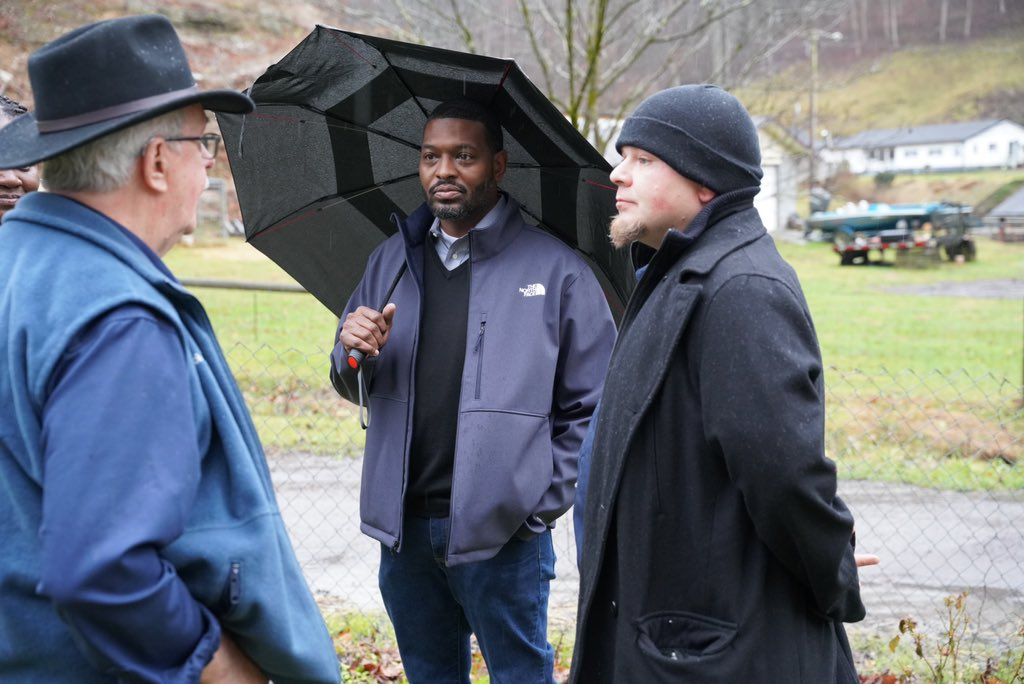 Regan is in McDowell County — population 20,000 — to highlight defective sewer systems and dilapidated plumbing in Appalachia. The region of the country that “once powered our nation and helped cement America’s competitiveness,” he said, now is “not in such great shape.”

“We owe it to communities like that to demonstrate our support,” he said in an interview with E&E News, “by also visiting and listening to people on the ground the same way that we’re doing with some of our other environmental justice communities.”

He called it “very important” to focus on the Appalachian region to emphasize that “no matter your race, or how much money you have in your pocket, everyone deserves clean air and clean water.”

“While there are similar themes throughout these tours, we do know that every ‘Journey to Justice’ tour is a little bit different,” he said.

In West Virginia, earlier this morning, Regan spoke to a family recently reconnected to the main water line. For lunch, he is stopping by the food bank Five Loaves & Two Fishes. Linda McKinney, who runs the food bank, said Friday she was planning to make Regan spaghetti pizza — the same dish she made for the late chef Anthony Bourdain when he paid her a visit in 2018. “We’re a food desert, and we’re also a water desert,” she said.

Already, EPA has spent considerable time in McDowell, where residents rely on a water treatment plant that is more than 100 years old. Regan said he has sent his staff at least six times to McDowell, a county where nearly 80 percent of voters supported former President Donald Trump in 2020.

The county is one of 11 communities EPA and the Agriculture Department are targeting for pilot programs to fix basic wastewater problems. The communities span Lowndes County, Ala., and North Carolina to tribal nations out west.

“Closing the wastewater gap is yet another example of the strong partnership that EPA has with USDA,” Regan said, adding federal agencies are helping counties like McDowell identify and pursue federal funding.

Internally, EPA has had to grapple with how to ensure federal dollars for water projects get to communities that need it most — in a transparent way. That’s because the funds flow through the states, which have different ideas about what constitutes a “disadvantaged community” (Greenwire, May 15).

Regan said he sent a letter to every single governor in the country, outlining how the money should be spent, according to the law. “We’ve been working very well with the state of West Virginia,” he said, adding, “Nationwide it’s going well.”

He said the state’s intended use plans for the first tranche of funding will construct a new water treatment plants in the communities of Elkhorn, Coalwood and Iaeger, providing water service to nearly 300 people.

He added he has been engaging “very constructively with Senators [Shelley Moore] Capito [R] and [Joe] Manchin [D].”

When asked, Republican aide Peter Hoffman noted Capito, ranking member of the Senate Environment and Public Works Committee, was one of the architects of the bipartisan infrastructure law. He also said the Republican senator secured millions of dollars for specific water projects.

“Ranking member Capito understands how critical it is to upgrade and improve water systems in West Virginia, and as funding is disbursed from the [bipartisan infrastructure law], she will continue working with the EPA and other agencies to ensure grants are properly administered in the communities that need it most,” he said.

A spokesperson for Manchin’s office did not return a request for comment.

More broadly, Regan has made a point to frame much of his work through an environmental justice lens. In September, he stood up a new Office of Environmental Justice and External Civil Rights and has already staffed it with 200 employees. He plans to pick someone to lead the office — a Senate-confirmed post — but declined to offer an update. People close to the matter have said Robin Morris Collin — currently an EPA senior adviser — is expected to get the nod (Greenwire, Oct. 6).

“We’ve embedded environmental justice into the DNA of EPA throughout all of our programs, since day one,” Regan said, adding, “We’ve made some institutional changes here at the agency that will live long beyond all of us.”

Correction: The story has been updated to correct the party affiliation for Sen. Joe Manchin (D-W.Va.).