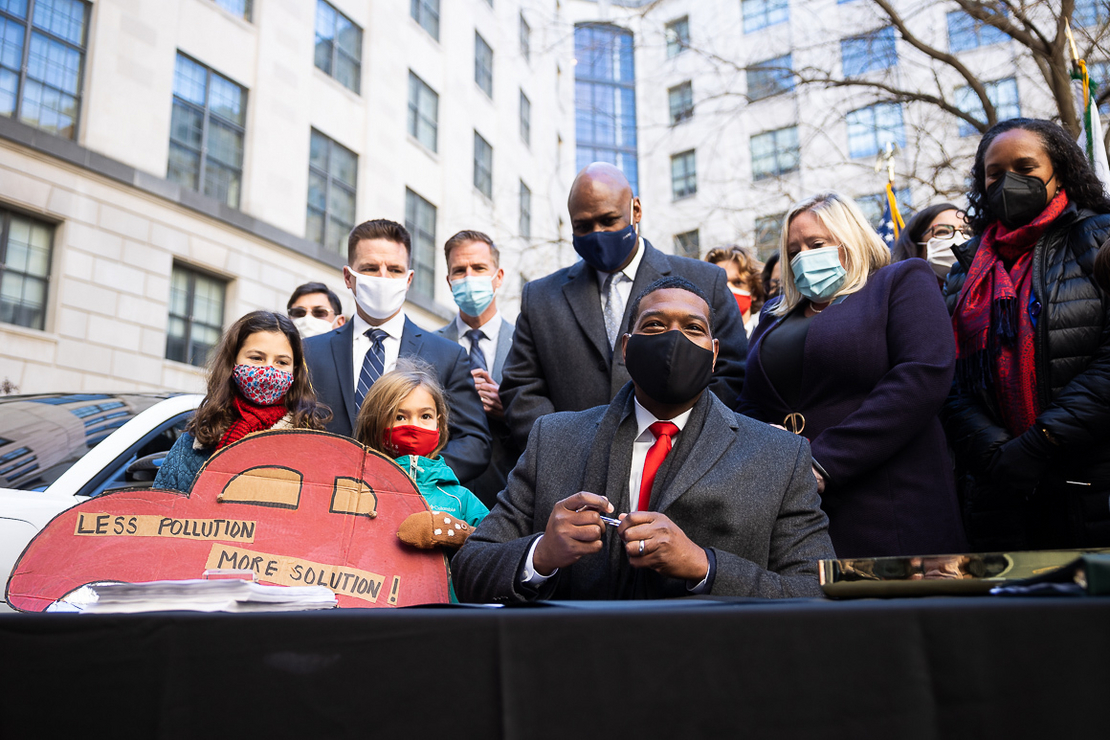 “This day is truly historic,” a bundled-up Regan said outside EPA headquarters, flanked by air advocates and electric vehicles made by some of the country’s biggest automakers. “Today we are setting robust and rigorous standards that will protect people’s health.”

He declared that the new rules are “grounded in science” yet “achievable” for the industry, proclaiming that by model year 2026, the standards would be the most stringent in U.S. history.

The final rule is tighter than a proposal the agency released last summer, with the “aggressive posture” kicking in during 2025 and 2026, Regan noted. He also vowed to get working right away on longer-term standards.

Specifically, the final rule “significantly accelerates the rate of emissions reductions to between 5 and 10 percent each year from 2023 through 2026,” according to the agency. That is expected to result in average fuel economy label values of 40 miles per gallon, replacing the Trump standard that would achieve 32 mpg in model year 2026.

Former President Trump’s rollback had required automakers to raise fuel economy standards by only 1.5 percent annually through 2026 — cutting the Obama-era rate that mandated automakers raise fuel economy 5 percent a year through 2025. Trump also revoked California’s authority to set its own standards, a waiver the Biden administration is trying to restore (Climatewire, Dec. 20).

Reaction from environmentalists ranged from applause to tepid praise to downright criticism.

While the Natural Resources Defense Council and the American Lung Association praised the new standard as “a critical step in transitioning the fleet to zero-emitting electric vehicles” and “a step forward for public health,” the groups said work needs to be done.

“With automakers now starting to shift to an electric fleet and unprecedented investments on the way for charging infrastructure, EPA must move quickly to set standards that ensure at least half of vehicle sales are zero emissions before the end of this decade,” said Manish Bapna, president and CEO of NRDC. “Given the climate crisis before us, we must lock in progress. There’s no time to waste.”

Others were not as upbeat.

The Center for Biological Diversity — a progressive, smaller nonprofit — dismissed the rule as “little more than a speed bump on the road to climate catastrophe when the president needs to make a U-Turn.” The center specifically lamented that the rule extended loopholes and called on the Biden administration to issue long-term standards beyond 2026.

One concern has been the so-called EV multiplier, a flexibility that was crafted during the Obama years.

Jeff Alson, an EPA retiree who worked on the Obama rule, said the new rule appeared to tighten the loophole to a degree, and generally praised the fact that EPA took a plethora of feedback into account when designing the rule.

“It’s a much more aggressive set of standards than what the Trump rollback had represented,” he told E&E News today.

Overall, he said, the new rule will represent a 28 percent cut over four years. By contrast, the Trump rule would have resulted in about a 6 percent reduction by 2026.

The auto industry has largely supported the administration’s efforts and has touted its own progress toward reducing greenhouse gas emissions as a sign of its commitment to a cleaner future.

The Alliance for Automotive Innovation today said the industry has invested $330 billion in electrification by 2025.

She stressed that Black and brown communities suffer the most.

“We have a lot more work to do to clean up pollution from cars, but today we are celebrating a much-needed step forward, which has taken into account the input from stakeholders like us.”

She thanked Regan and pressed him to “keep going.”

When asked about it, Regan remain positive about the Biden administration’s ability to use its executive powers, pledging “to move forward very aggressively.”