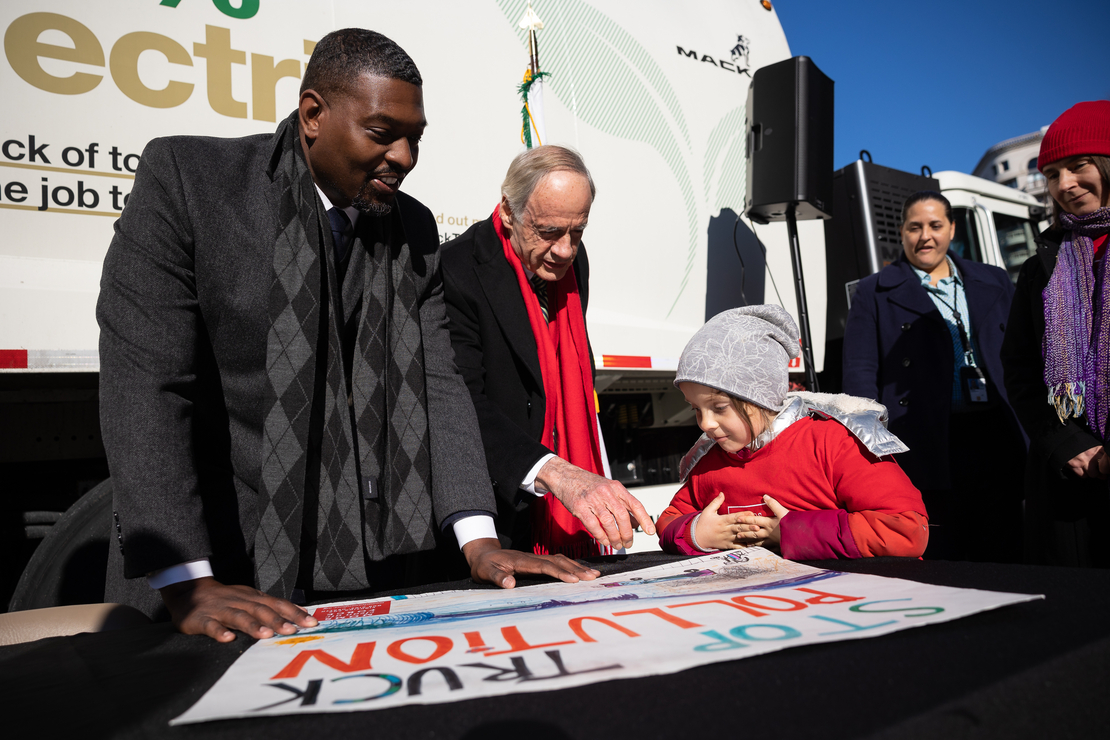 The new requirements are a “game changer” and will lead to “widespread air quality improvements across the United States, especially in communities near major roadways that are overburdened by air pollution,” Regan said at an outdoor ceremony Tuesday morning just before signing the final rule against the backdrop of an electric garbage truck.

But while some environmental and public health groups quickly praised the stronger standards, which take effect in model year 2027, others argued that EPA should have gone further in pushing adoption of electric 18-wheelers and other heavy-duty vehicles.

“Many states already have rules in place that effectively reduce pollution and advance truck electrification — rules that are more ambitious than what EPA has put forth,” Dave Cooke, senior vehicles analyst for the Union of Concerned Scientists, said in a statement.

By 2045, the new regulations are expected to cut emissions of nitrogen oxides (NOx) from the heavy-duty vehicle sector by about 48 percent, significantly less than the approximately 60 percent reduction predicted from one of the two options EPA initially considered. In a brief interview after the signing ceremony, however, Regan underscored they are the first of several steps intended to cut pollution from the transportation sector, with proposed new greenhouse gas standards for heavy-duty vehicles scheduled for release in March.

Besides setting more stringent NOx emission limits, the new regulations require “lower NOx emissions over a much wider range of testing conditions both in the laboratory and when engines are operating on the road,” according to an agency summary.

NOx, a lung irritant, contributes both to formation of smog and soot, two pollutants that are variously tied to a wide array of cardiovascular and respiratory ills. By 2045, when most heavy-duty vehicles are expected to be covered by the stronger standards, EPA predicts that they will annually prevent between 860 and 2,900 premature deaths and lead to 1.1 million fewer lost school days for children and 6,700 fewer hospital admissions and emergency room visits.

By 2045, EPA forecasts show estimated annual compliance costs will be $4.7 billion, with health benefits between $10 billion and $33 billion, depending on what assumptions are used.

“This is a very, very strong standard,” Regan said.

In a statement, the head of the Truck and Engine Manufacturers Association took a measured stance. While the industry trade group is still reviewing the final version, “it is clear the rule is very stringent and will be challenging to implement,” association President Jed Mandel said. “Ultimately, the success or failure of this rule hinges on the willingness and ability of trucking fleets to invest in purchasing the new technology to replace their older, higher-emitting vehicles.”

EPA last tightened the NOx emissions standards for heavy-duty vehicles in 2001. After regulators from California and other states petitioned for an overhaul in 2016, it took EPA almost another six years to come up with a proposal earlier this year (Greenwire, March 7). Under that draft, agency officials offered two options for consideration.

The first would have implemented tighter limits in two stages, starting in model year 2027 with a second phase following in 2031. Over the long term, it would have cut NOx emissions from the heavy-duty vehicle sector by more than 60 percent, according to the proposal. The other, less rigorous, option would have gone no further after 2027 and led to an approximately 47 percent reduction in emissions.

The final rule adopts a single-stage approach with the expected emission cuts closer to those associated with the second option. But in the interview, Regan said the rule “leans more towards option one,” with “some bits and pieces from option two, so that we could get sort of the best of both worlds.”

At the signing ceremony, which took place at a plaza abutting EPA headquarters, he was preceded by about a half-dozen speakers from EPA and labor, environmental and public health groups, as well as Senate Environment and Public Works Chair Tom Carper (D-Del.).

Pollution from heavy-duty vehicles, trucks and buses makes up nearly one-quarter of all transportation emissions in the U.S., Carper said in linking the expected overall impact of the new regulations to spending for pollution reduction and climate measures included in the Inflation Reduction Act and an infrastructure law.

“We look forward to working together as we continue to make progress toward cleaning up our vehicles,” Carper said, “and the air we breathe.”