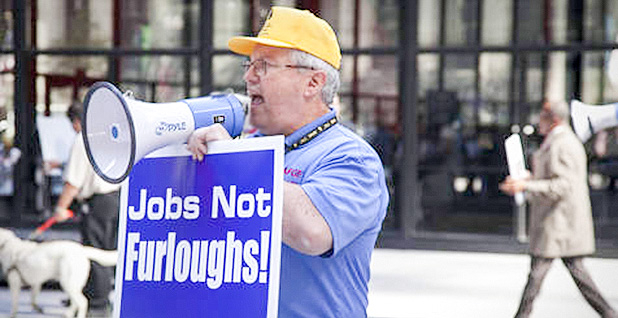 John O'Grady is the president of the American Federation of Government Employees National Council of EPA Locals 238. O’Grady

The head of EPA’s largest employee union figures his boss, Administrator Scott Pruitt, has about six more months — max — at the agency’s helm.

"Personally, I don’t believe he has the support of the president," O’Grady said during a recent telephone interview from EPA’s Region 5 office in Chicago. "Every time you hear something in Washington, it’s usually they say the opposite of what they’re thinking."

The Chicago native adds that Pruitt is "just a huge liability, and he’s lost his credibility with Congress."

An EPA biochemist for 31 years, O’Grady, 65, is president of Council 238 of the American Federation of Government Employees and a familiar face on Capitol Hill and at rallies advocating for his union’s 9,000 members.

He’s the national spokesman for "Save the U.S. EPA," a campaign to protect workers and keep the agency intact. This week, the union joined ranks with a coalition of environmental organizations as part of the "Boot Pruitt" campaign seeking to have the EPA chief resign or be fired (E&E News PM, April 10).

O’Grady, who is married with two grown children, once mulled going to the seminary to become a Roman Catholic priest before studying biology. He’s now taking classes in theology and considering what he’ll do after he retires.

He recently talked with E&E News about studying with monks, the mood inside EPA and what comes next under Pruitt:

How are folks feeling in the agency?

It’s not good. I think people that are getting close to retirement are considering it. The other ones are keeping their heads down and hoping it changes. … I don’t think that’s a good idea.

Have you met Scott Pruitt?

I have not. In fact, he’s not met with anyone in the union. I don’t think this particular administration cares about unions other than they’d like to destroy them. I think it was Joe Biden who said unions are the only defense keeping barbarians at the gates. I think he’s right.

If Pruitt leaves, who should replace him?

I’d love to bring back [EPA’s first administrator, William] Ruckelshaus, but I just read where he indicated he’s 85 now, so that’s too old — his words, not mine. I’d love to see him come back.

I don’t care what a person’s party is, but when someone comes in with an animosity toward the agency and its mission, why are they brought in other than what was alluded to in January of 2016, to deconstruct the agency?

I really believe that’s what they’re going to do.

What’s next for EPA?

If the elections go south for Republicans in November, we might be through the worst part of it. I think they’re going to come back through the 2019 budget and justify through a workload workforce rebalance that certain savings can be made by consolidating regional facilities, laboratories, etc.

Where do you see the agency after the Trump era?

I’m hoping that by the end of this administration, there’s enough of the EPA to rebuild it. I think the Trump administration is going to keep going after us and we’re not going to get out of the woods until we get through the elections 2 ½ years from now.

Will we see more buyouts?

I’m [hoping] there will be no buyouts this year. In fact, I think they’re specifically prohibited from doing a buyout because $79 million possibly would have put us at 2,200 people at the EPA, which would have pretty much gutted it. We’re down to like 14,000, and we were at a high of 18,000 in 1999. We can’t afford any more people leaving the agency.

How did you end up at EPA?

I went to [Purdue University] and studied biochemistry, stayed an extra year in grad school but didn’t get a degree. I worked as a technical sales rep for environmental analytical sales and spent some time as a consultant for EPA.

I started at the EPA in ’84, I must have been 32. I started as an environmental scientist in the water division working on pre-treatment programs.

And you grew up in Chicago?

I grew up on the South Side, in West Pullman, went to school in Roseland. My father, John, was an engineer. He worked for the city of Chicago water department, he worked on the drinking water. My mother, Beatrice, was a homemaker.

Did you have any nicknames growing up?

I don’t know why, but yes, "Rosie," as in "Sweet Rosie O’Grady." It’s a schmaltzy song from the 1930s. I got it when I played football. … I was a walk-on at Purdue, which was an act of craziness. Those guys were big.

I would have been a great pro athlete except I lacked size, speed, agility — a couple of those things.

I decided five years ago to go back and study theology, of all things. I should be graduating this May with a degree in pastoral studies. It’s kind of an extensive degree, and I think I’ll have post-60 credit hours by the time I graduate from the Catholic Theological Union.

What are you going to do with your degree?

Some sort of adult ed slash ministry in a parish or university setting once I finish the degree and decide to retire.

Had you ever thought of becoming a priest?

At the age of 30, I went to the seminary thinking I had a calling to be a priest. That was Saint Meinrad Archabbey in southern Indiana. It was an excellent experience. I always had an interest in scripture, theology and religion. It was a great education.

Why didn’t you stay with the seminary?

When you go through that experience, you discern whether or not you have a calling. I think my interest was more in theology and the study of theology than in being an ordained minister.

I was concerned, really, that I didn’t have a vocation, so I checked with people I had met at EPA and just indicated, "I’m out and looking for work," and they hired me on to EPA, I think it was April 1, 1984.